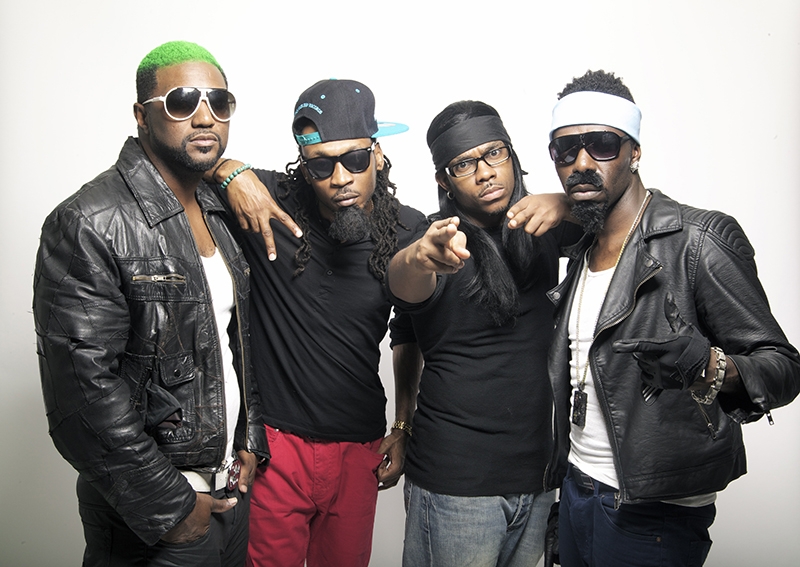 “Lemme smang it, girl, smash it and bang”: If you don’t automatically know where these lyrics come from, you were either born into an anti-technology polygamist family or have parents that solely bought their kids educational toys for Christmas. Founded by Flynt Flossy and Whatchyamacallit in 2009, record label and musical performance group Turquoise Jeep hit YouTube hard with the music video for “Lemme Smang it” in 2010, and they’ve been keeping the jeep ridin’ ever since, brandishing diverse conerstones on their roster à la Yung Humma, Pretty Raheem and Slick Mahony. With a music video for each song off of their debut album, Keep the Jeep Ridin’, the Jeep have been pushing the pedal to the metal, as the subsequent videos for their singles have increased in quality, and the production of their tracks has become more crisp with sharper club vibes, the latest being “Taste You Like Yogurt” (featuring Flula Borg) and “Naughty Farmer.” All but Mahony rolled through to SLC at Kilby last May—Floss says, “It was our first time there. There was a lot of energy. It was cool, man—we really liked it!” It took TJ manager Leon Imperial only one call-and-response exchange of “Turquoise” for “Jeep!” to know that Salt Lake was packed with Jeep riders—and they’re coming back Nov. 17 to Kilby AND Urban.

To fully understand the Turquoise Jeep experience, one must see their music videos. Where almost each song expresses the artists’ sexual appetite for and relationships with attractive women, their zany vids feature off-the-wall yet stylie dance moves (rife with pelvic thrusts) and mega-babes with lo-fi videography that play out hilariously for many. Though their music certainly stands on its own, the videos add an extra dimension—Humma’s frying-pan arm dance in “Fried or Fertilized,” coupled with his visceral gaze into his video-girl’s eyes, gives the audience a visual of how to dance to the song live and the sentiment that comes along with it. “I think it helps people get a taste of what we see in our world,” says Whatchya. “All our Jeep riders, of course they know what we’re about, and they get to see what we’re thinking about, see how we are—how we interact with people.” What’s more is that this crew takes their music seriously, joking reactions notwithstanding. Humma ponders the matter, saying, “I feel like, with the videos, it’s not [that] we’re trying to make it funny or trying to make it comical or anything like that. What makes it funny is that everyone else can relate to the subject matter.” It’s true: As with the “Shuyamouf” video, I, too, would want to calm down my girl and let her know everything’s gonna be OK with a soaring dolphin arcing through the air and back into the ocean (… because I cheated on her).
Turquoise Jeep exhibit truly amazing rapping and singing skills on their tracks—Floss and Humma spit sharp and smooth rap styles, respectively, and Whatchya and Raheem croon with panty-melting R&B singing, which they execute live while dancing, usually in, on or around the laps of adult-female audience volunteers. Each artist brings something different to the table: “[It’s] just a group of guys who just wanted to put together music that they love and music that they would enjoy listening to,” says Humma. They’re continuing this momentum—at the time of this interview, the Jeep were recording their second full-length, Keep the Jeep Ridin’ Vol. 2, which they hoped to have completed by this month and to release in December. Turquoise Jeep eschew well-established genre associations and opt to call their music something that they feel encompasses their diverse musical talents: Existing Musical Beings. “Really, for this album, what we’re trying to do is make it … [have] a worldly sound, and trying to show our fans what we’re really all about,” says Whatchya. “The cool thing about it is we’re experimenting more with different types of sounds or different types of music—that’s why EMB (Existing Musical Beings) is such a better genre for us than straight-up hip hop.”
Their live shows round out the Turquoise Jeep dynamic. Raheem says, “We have to give props to Lady Frostbite, who is our choreographer for some of the routines that go down onstage when we’re on tour.” Holding true to his grooves in “Did I Mention I Like to Dance,” Floss busted out pop and lock–influenced moves on the small Kilby stage, and the whole crew also executed synchronized routines. Pound for pound, Turquoise Jeep generate a show atmosphere that pulls from the fun, energetic ethos of their videos that relay the casual American dude’s game in getting dat azz. “It’s an experience—we can’t really call it just a show,” Floss says. “We have a following where they understand the art, and they feel it—they sense it, and we vibe with it.” They’re unafraid to inject themselves into what they create, regardless of whether it’s risqué—Raheem says, “Of course, you probably paid attention, also, to the food—we have food fetishes: cavities, eggs …”
Come get loose at the Turquoise Jeep parties at Kilby and Urban rockin’ your #ktjr gear from turquoisejeep.com on Nov. 17, and follow them at @TurquoisejeepMusic on Instagram, @Turquoisejeep on Twitter, and subscribe to them on YouTube. Flynt Flossy says, “Stay posted ’cause it’s going down, baby.”
Photos: