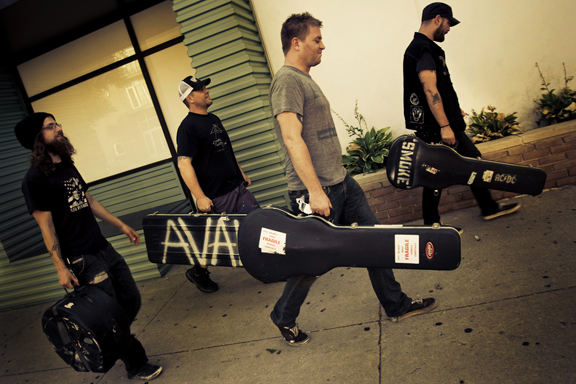 Smoking to the Filter

The Struggles, Troubles, Steadfast and Momentum of Smoke or Fire
There once was a band called Jericho…actually, there were two bands called Jericho. One was an aging Christian rock group trying to groove their way into heaven; the other was a punk band in Boston. One will embark on a reunion tour of the Bible Belt this summer after their drummer recovers from hip-replacement surgery; the other moved to Richmond, Va., awhile back, changed their name and just released their debut album on Fat Wreck Chords called Above the City. I spoke with Joe McMahon, the guitarist/vocalist for one of them, I bet you can guess which.

“When we signed to Fat, this other Jericho said they were going to sue us if we didn’t change our name or pay them off. The artwork for the record was already done, so basically we were on tour and had a week to find a new name. I didn’t care what we were called because after seven years of having the same name, it was just so frustrating. We were throwing stuff around all week and then we were really drunk in New Jersey at five in the morning playing that drinking game where you try to guess whether the next card’s black or red, and you say ‘smoke’ or ‘fire,’ and I said, ‘How about we just call ourselves Smoke or Fire?’ And everyone was kind of like, ‘OK.’ The deadline was the next day for a new name.”

Smoke or Fire fill the space between the semi-old days of hardcore (think Avail) and that “melodic hardcore” shit that’s finally shriveling up and dying after puking itself on us a few years back, and they fill it well. They also sound like Yankees that have spent some time in the dirty South, which is apt when considering their history: “We lived and played in Boston for four or five years anywhere we could but we couldn’t afford to live there and go on tour,” Joe told me. “There were seven of us living in a three-bedroom apartment. People were sleeping on mattresses in the hallways just so we could afford the place. So when it came down to it a couple years later we were like, ‘Richmond has a good music scene, it’s cheap and it’s a pretty good location on the East Coast to start touring from, right between the Northeast and the South.’ We would have moved anywhere besides Boston. Richmond seemed like a decent place for us to do what we wanted to do, an affordable place where you can pay your rent and go on tour.”

From there, things began to go uphill: “Jeremy (S or F guitarist) met Tim [Barry, from Avail] on a stage-hand job when we first moved to Richmond. I think Tim was impressed with the way we had moved down here and how we did things like have free house shows for bands coming through town. Avail was on a US tour with The Curse and they broke up so Tim called us to see if we could go on tour. He called us on Sunday and we all quit our jobs and went on tour on Monday.”

Living the typical punk life (poverty, punk houses, working shit jobs to support their music habits, etc.) has been an integral part of Smoke or Fire’s existence for their entire music career. I asked Joe how this played into their music. He said, “I consider us a social band, trying to write songs people can relate to. I don’t think people can relate to you unless you live the way that they live. If we were a bunch of rich kids writing songs about struggling you’d be able to sense that. But we were working the shitty jobs with the people and so I think that comes across in the music. You write about what you know and if that’s your life then that’s what’s going to come out.”

However noble and punk rock this may be, there is the obvious downside, i.e., when they get signed to Fat Wreck, start making money off of their tours and don’t have to worry about getting their utilities shut off every other day. Joe says, “I think that’s why we’ve intentionally fucked up so many good opportunities, like getting e-mails from really good labels asking us to send a demo and not sending a demo. I think I was afraid of taking any kind of success, even to the point of asking myself, ‘What am I going to write about if I’m not going through this struggle?’ You see so many bands that, once they make some money they don’t have anything to write about. I’m not really concerned about not being able to write, but I am curious to see what happens.”

Above the City came out in March, and I bet you’ll even be able to find it in a record store in town.