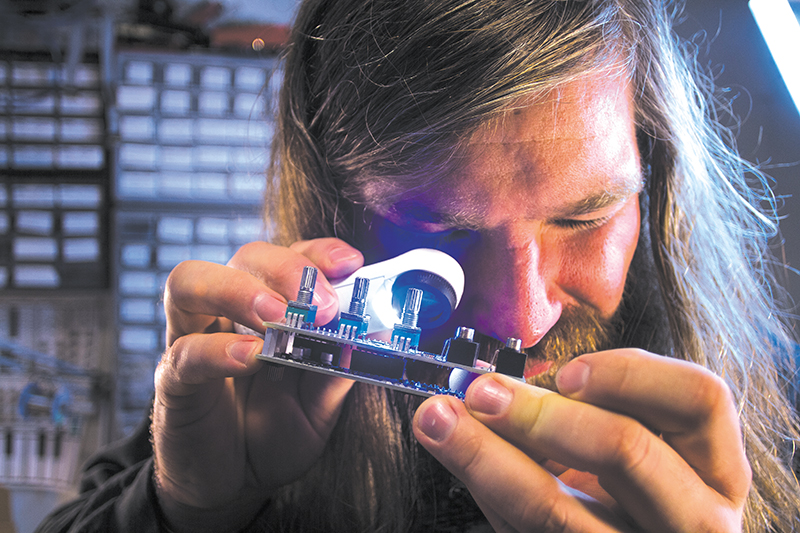 To understand what a Eurorack is, and what it does, imagine a synthesizer with a straight-up design where you’re manually patching different units within a case, like Kraftwerk. A Eurorack is a synthesizer, in a modular format. Inside most synthesizers lie a printed circuit board (PCB), that green board littered with resistors, transistors, capacitors, LEDs and a power supply that you see inside most electronic gadgets, from keyboards to calculators to children’s toys. It’s these tiny components that help shape the sonic universe that most electronic musicians explore.

Some electronic musicians, such as Aphex Twin, Brian Eno, Tangerine Dream and Alessandro Cortini, at times favor Eurorack modules. Modular synthesizers are beneficial to any electronic rig due to the fact that with most synthesizers, the voltage controlled oscillator (VCO) is a mere sound source. A modular synth, in contrast, opens up entirely different parameters and galaxies of sound, such as using the VCO to control other modules. New capabilities arise, giving the musician the flexibility to use filters to manipulate gates and pitch.

Softwire Synthesis is the brainchild of Lance Iden, a bright-eyed, humble and intuitive Wyoming native who toils away night after night as his growing experience and inquisitiveness lead him from one creation to the next. Iden comes across as a person with a deep natural curiosity, possessing a natural propensity for exploration, especially aurally, and these qualities bleed through into Softwire’s products. Speaking to Iden, it became clear that beneath his soft and welcoming exterior lies a brilliant and instinctual mind, a person who will enthusiastically yet calmly speak to you about anything from the Schumann resonances and music theory to astral projection and ancient Egypt, recounting from memory the dimensions of the Giza pyramids.

It’s this brilliant and instinctual mind that, from scratch, started Softwire Synthesis. With a guitarist background, Iden began tinkering with effects pedals, doing simple modifications such as changing capacitors in basic models. His interest was further piqued by the Moog line of Moogerfooger effects pedal—in particular, their control voltage (CV) output jacks. This led Iden into synthesizers, sparking him to design his first PCB in 2009. Since then, Iden has built over a dozen offerings, ranging from Euroracks to cases, with Billy Corgan being his first customer.

The idea of Softwire Synthesis was a lingering thought in the back of Iden’s mind for a while, but his vision was always clear: basic and minimalistic. “It took a while to kind of refine this,” he says. “When I first started, it was really basic, design-wise and software-wise. I didn’t have the software I needed, but it’s always been minimalistic … while still being easy to comprehend and use.” Inspiration comes from different areas for Lance. “I’ve actually designed modules watching a band play at Urban Lounge,” he says when asked if he’s ever heard a sound and immediately been moved to create. “It’s just in the back of your head, thinking of melodies.”

Iden designs everything himself, paying close attention to aesthetic and layout as well as the user experience. Aside from modules, Iden also builds eye-pleasing and competitively priced cases, incorporating a mix of screen-printed parts and actual panels from his circuit board manufacturer.

Softwire’s products are meant to be simplistic, easy to use and group-oriented. Electronic music  is an accessible and subversive form of creation, and Softwire puts these ideas at the fore. “Creating electronic music on your computer, at least for me, gets really boring, fast,” he says. “Something like [a modular synthesizer] allows people to get back into the experimental mode where really interesting types of music come out.”

With roots in the DIY community, Iden spends part of his spare time collaborating with local brick-and-mortar distributor Squarewave Sound, hosting the Modular 101 workshop. This sort of communal setting is a unique facet of Softwire, which creates instruments geared toward an intrinsic style of music that is more often than not completely individualistic. Regarding how he hopes he is contributing to the future of this subversive branch of sound, he says, “In the future, I could see a little bit less computer usage for electronic musicians. As far as where I would sit in that, the stuff that I’m putting out right now connects a lot of the different modular users, whereas [otherwise] it’s an inside-yourself type process.” It’s this secular form of creation that makes Softwire’s approach to instruments unique, creating “[a] group kind of [environment].”

Softwire is growing exponentially, with Iden currently training another person to help him build so that he has time to help his products creatively blossom. “I’m obviously not done designing stuff,” he says, “but I hope, in the near future, it connects a lot more users.”

Softwire Synthesis’ products can be ordered directly through softwiresynthesis.com or through electronic music instrument distributor Analogue Haven (analoguehaven.com). Locals can check out products in person at Squarewave Sound (1321 E. 3300 S.). There are no current Modular 101 workshops scheduled, but curious minds are encouraged to attend the next Synth Meet, held on March 10 at 7 p.m. in the basement of St. John’s Church (475 Herbert Ave.). Sonic explorers are welcome.