Throughout their set, more and more people wander into their performance in search for something a little more refreshing than the press-play-and-go antics provided by Calvin Harris across the park. By the time the band played their closing song, “Wild,” from their debut album Glow, they definitely had quite a few new fans, including myself. I sat down with Royal Teeth for an interview where they gave SLUG the low-down on their current careers, future plans and what it took to get where they are now.

Southern Charm: An Interview with Royal Teeth in Voodooville 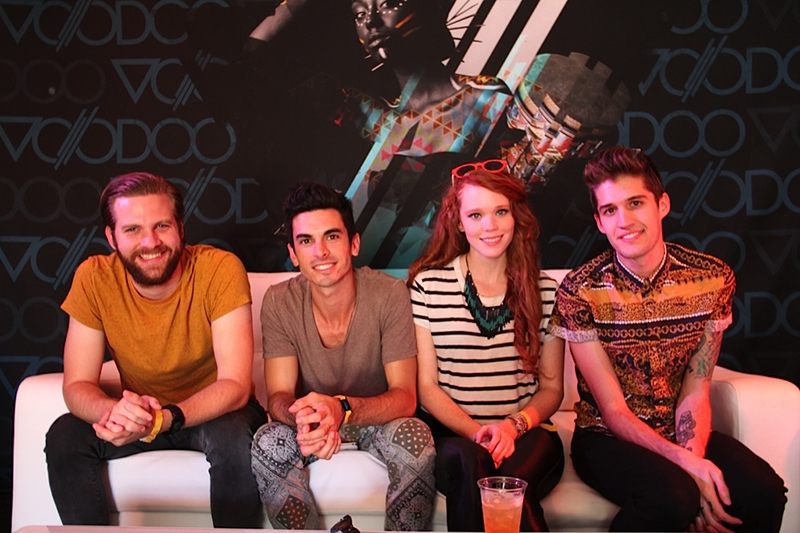 “This is one of the finest bands coming out of the south,” the emcee announces to the crowd as the Louisiana-based band Royal Teeth take the stage. The group of six members nervously begin their set at this years’ Voodoo Music Festival in New Orleans in front of a small crowd of 20 or 30. However, despite their small turnout, they carry on humbly and their obvious passion for music and performing is what draws more and more people to their stage from the Macklemore concert going on just a few feet away. Their music characterizes the energy of the South perfectly¬-⎯relaxing, mid tempo folk sounds using classic rock band instruments and uplifting harmonies between lead singers Gary Larsen and Nora Patterson. “Come on, New Orleans, sing along with me!” Larsen screams into the slow growing crowd that haphazardly attempts to hum the melodies with the band as their infectious charm slowly captivates onlookers. Throughout their set, more and more people wander into their performance in search for something a little more refreshing than the press-play-and-go antics provided by Calvin Harris across the park. By the time the band played their closing song, “Wild,” from their debut album Glow, they definitely had quite a few new fans, including myself. Prior to their performance, I sat down with the band for an interview where they gave SLUG the low-down on their current careers, future plans and what it took to get where they are now.

SLUG: What do you think of performing here at Voodoo? You all hail from Louisiana, so what is it like to play a big show on your home turf?
Larsen: It’s exciting—it’s the festival we grew up attending, so we’re very honored to be a part of it. Last year we played Sunday morning—what I call the hangover shift.
Patterson: It’s good to be at home and to be comfortable in the environment.

SLUG: Do you think you’ll see a lot of your friends and family in the crowd?
Larsen: I think so. Some of our friends are coming and there are a lot of fans we’ve met along the way that have told us they’ll be here. It’s a tough time slot because Macklemore is playing as well, but we’ll see what we can do.
Andrew Poe (keys/percussion): A couple of the bands we’ve toured with in the past are playing the festival too, so its cool to reunite with people like ZZ Ward and some old friends from the road.

SLUG: You performed at this year’s SXSW festival—what was that experience like?
Patterson: I think we played nine shows in three days, so it was kind of crazy.
Larsen: I remember at the end of the last show, we got in the van and I think I threw up in my mouth, so that’s what SXSW is like.

SLUG: Coming from different towns around the state, what brought each of you together?
Larsen: Andrew and Josh [Hefner, percussion] were previously in a band called Oh Juliet. Louisiana has a lot of music, so it’s not very hard to find people in other bands. I was getting shows booked for my band [at the time] and when my band broke up, their band broke up as well so we just decided to start a new thing. This is Nora’s first band ever⎯we knew she could sing, so we recruited her from singing in coffee shops.

SLUG: What are some of the bigger influences in your lives that affect the way you write and perform? What are some of your favorite things to write about?
Larsen: I think we all get influences from different places. I listen to a lot of Michael Jackson. Someone told us we sound like a modern Fleetwood Mac. Nora loves a lot of folk—I’ve heard a lot of people say she has a lot of blues and soul to her voice.

SLUG: What is your creative process like as a group? Who does the most writing? Who works on the visual aspect of your work?
Larsen: I’d like to say we write collectively as a band. I write a lot of ideas that I call “skeletons.” I write a lot on the acoustic so I’ll have a melody and some lyrics and I’ll present it to the guys and from then on, we’ll see what we can create as a group. Now that we have Nora on board, she helps a lot with the lyrics and the melodies. It wouldn’t sound like Royal Teeth without everybody.
Patterson: I do a lot of the graphic design stuff. I graduated from UL in interior design, so I like to use that part of my degree.

SLUG: Did you design the cover for your album, Glow?
Patterson: Yeah, I did. I do some of the T-shirts and posters and whatever I can, just because I enjoy it.

SLUG: From what I understand you recorded your album in Toronto. Would you say the change in location had an affect on how you produced your music?
Poe: We kind of had that in mind when we went there—it was just a culture shock.
Hefner: A weather shock.
Larsen: We were in a place where it was snowing every day. The whole idea was shining light in the dark, so I think being in a place that was so gloomy and trying to create positive music was a cool place for us to be.

SLUG: You’ve recently done some touring around the West—can Salt Lake City expect a visit from Royal Teeth in the future? Hefner: Yes.
Larsen: We’ve been to Salt Lake twice now and we’re planning on getting back to the West Coast in early 2014.

SLUG: Do any of you come from a musical background?
Larsen: I took music classes in high school. I think I just got lucky that I’ve had a knack for it.
Patterson: My great-grandmother was a piano teacher and I’ve been singing for a long time, so kind of.
Hefner: No, I started playing drums in the fifth grade when you had to choose band or chorus, but as far as family goes, not that I know of.
Poe: I went to college for music, but everyone listens to music and you can work at it no matter what, so I think everyone technically does.

You can check out more from Royal Teeth at their website for information on upcoming tours, or download their debut album Glow from iTunes. Check out the video for their single “Wild” (which is currently being used in two commercials) below.