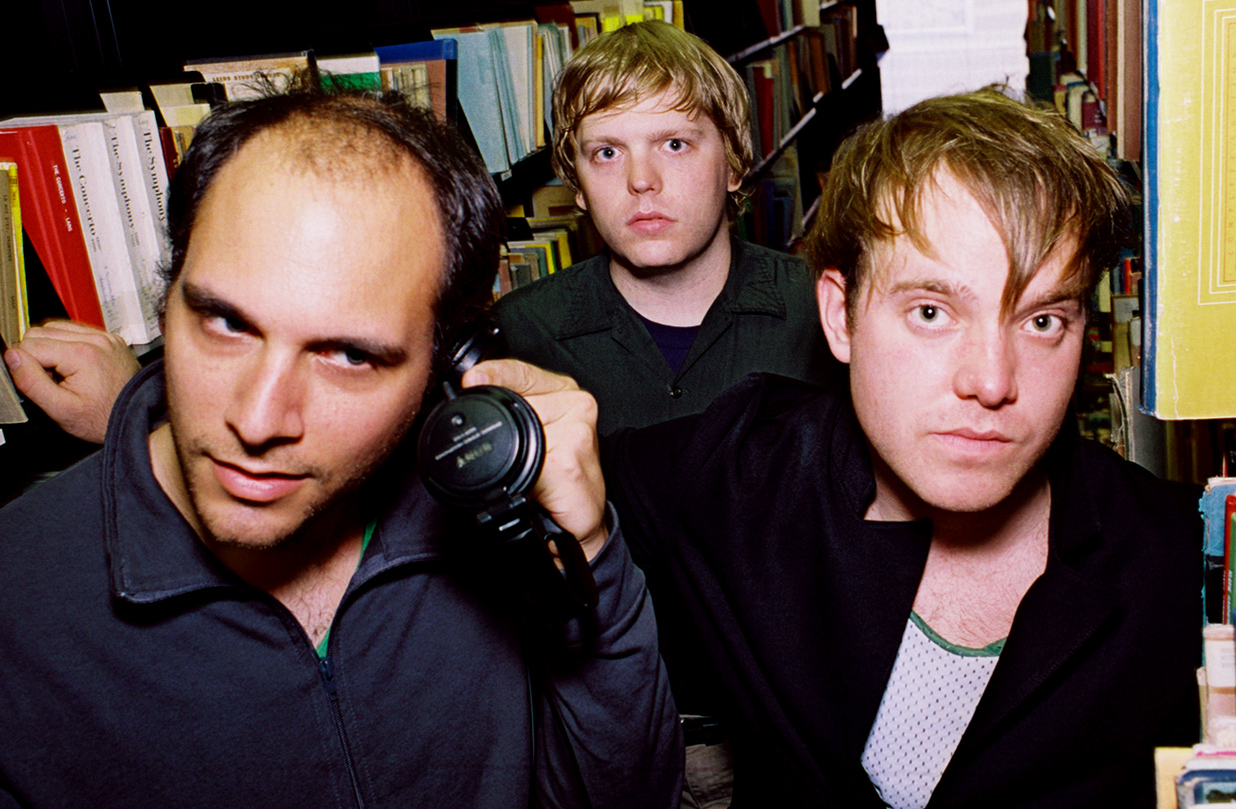 Speak Nonfiction, Bleed Nonfiction: Q and Not U Bring a Message to the People

I have always been a member of the music-and-politics-don’t-really-mix-because-no-one-cares-what-musicians-have-to-say-anyhow camp. Obviously, I can’t ignore the glaring exceptions to the rule. For instance, consider the reverence that Bob Marley and his music are still, in the present day, granted by the Jamaican populace. Yet with artists such as Bob Dylan and Woody Guthrie often still serving as musical barometers of appropriate political involvement in this country, it would seem that the need for a new form of social protest has been present for some time.

[Q and Not U] As members of Washington D.C.’s Dischord label, operated by members of the politically inclined post-punk, ber-band Fugazi, it seems that the members of Q and Not U, granted a bit more exposure, could easily fill the role of successful 21st-century artistic activists. Yet, Q and Not U are not simply a more amiable version of Rage Against the Machine. Our uniquely named friends are here to inform us that we must inform ourselves.

In speaking with John Davis (drums/percussion/backup vocals) and Chris Richards (guitar/bass/keyboards/vocals/songwriting) over the course of two interviews, I realized that informed optimism can often be the most valiant opponent of sociopolitical turmoil. With their musically diverse, lyrically progressive and surprisingly danceable new record, Power, Q and Not U have upped the ante for indie-rock involvement. Now they’ll tell you how.

SLUG: Do the instrumental diversification and expansion of vocal treatments go hand in hand with either the enhanced political content on the record or the increasing urgency in the political climate at large?

Chris Richards: I can definitely see that being the case, but we feel we just do what comes naturally. But in context, all the current political debates revolve around the issue of freedom. The same freedom we possess and explore.

SLUG: Are there any collective influences or interests that are moving the band in this direction?

John Davis: Though we’ve been moving in this direction for a while, the core influences that people are going to spot on this record are Fela Kuti, James Brown, Prince, Daft Punk and on and on. But we are still a punk band. But, to break it down, in 2000, when we made No Kill No Beep Beep, we were listening to 75 percent rock music and 25 percent dance music. Hence, that was more a traditional post-punk record. But now that ratio is reversed.

SLUG: It seems that the rhetoric on Power is not only more openly political than your previous albums, but the lyrics also seem to become more firm in the socially minded stance as the album progresses. With statements like “we’re keeping our flags at home” and “can’t take it out, forever your country” in the final two tracks (“Book of Flags” and “Tag-Tag”) it seems a message has been fleshed out of previous metaphors and allusions. Is this something that was evident to you while recording, or even now in retrospect?

JD: At first, I didn’t necessarily think this was a political record. But thinking back, it makes sense, considering everything that is going on in the country and who we are as people, that there is a lot of politically minded content.

CR: I just tried to let the songs write themselves. I tried not to fight it. In the past, I was certainly more attracted to fragmented lyrics and imagery that require the listener to bring their own set of aesthetics to the exchange. Hence, this record feels far more narrative and explicit. But, on the other hand, it seems that keeping some of the lyrics in the rhetorical gray area shows more respect for the listener and their intelligence.

Chris went on to say that he usually doesn’t inform John about the presumed messages contained in the lyrics. Hence, the band has its own set of checks and balances, a way to sort through the potential interpretations of their material.

A few days prior, my own politicking tongue had been thrust into action after witnessing a new music video with terribly overt political content. As I was speaking with culturally conscious musicians, it seemed a good idea to discuss this intersection of pop music and politics.

SLUG: Regarding Green Day‘s new single and video, “American Idiot,” do you feel that bludgeoning statements such as “not part of the redneck agenda” or images like stripes melting off the American flag while slime covers the band hinder the causes of organizations that challenge the status quo and this administration, perhaps because the statement can easily be interpreted as anti-American?

JD: They just happen to speak to 16-year-olds. It is certainly not eloquent or mature, but I’m glad that there’s a big band that at least is talking about these issues. Yet it will turn off a lot of people because it is so easily misinterpreted and misrepresented. Members of the political right could simply attribute these statements to all liberals and say, “this is how the left views this country.” It was the same issue with Rage Against the Machine. Their words and images seemed to lack resonance because they were major-label artists. It is hard to be a rebel when the system is paying for your megaphone. But I understand the argument that they might have used the system to get their voice heard. That is really the lesson to learn: that politics and social concerns are never present in black and white. There is always room for debate.

Chris would also demonstrate this rational flexibility; a thing I thought was lost on the D.C. punk scene and Dischord Records.

CR: It’s a double-edged sword, really. But I would rather have Green Day write lyrics with such political content rather than filling another album with songs about girls and Slurpees. Ideally, kids can accept this political content and then build upon that foundation themselves and reach out to more provocative information.

SLUG: Considering that, yet also recognizing such artists as Bruce Springsteen and John Mellencamp, who openly endorse the Democratic Party and could potentially influence the middle-aged vote, what artists are left to fill the influential middle ground, the 18 to 30 demographic?

CR: In the popular spectrum, the influence certainly belongs to hip-hop. Rock radio is pathetic. It’s a floundering menace full of bland, atrocious music. Even considering the current work of Russell Simmons and Outkast’s performance on the VMA’s making light of the political conventions, the current state of musical activism is kind of sad. I mean, where’s our Sly Stone? Where’s our Bob Dylan? On the other hand, within the last year, vocalization about these issues really seemed to build in the underground communities. Yet, regardless of the outcome of the election, we can’t subside into apathy after we get the results. Apathy has been intrinsically burned into American culture, especially in this demographic, and hopefully this election destroys that.

SLUG: In your experience, do you feel that hailing from Washington D.C., the homeland for such issues, has made it any easier to get points across to an audience?

JD: People might think we have inherent attachments to these issues based on our location and the history of the D.C. punk and hardcore scene. Singing about politics and doing benefit shows is part of our musical DNA.

CR: In a subconscious way, being in D.C., a city that is built on the industry of the federal government, certainly influences our music. Yet I certainly don’t think we are any more qualified to talk about social issues than anyone else in this country. Being an American is the only right you need to say anything.

SLUG: What is your favorite politically minded album in your collection?

I’ll admit I didn’t quite hold my ground on this question and allowed John and Chris the opportunity to talk about whatever they wanted. Hence, I didn’t receive the most concise answers. Regardless, the resulting continuity proved to be charming.

CR: Fela Kuti is incredibly important. This is a man that ran for president of his native Nigeria, built a fence around his property and declared it a sovereign state, only to have the government invade it and kill his mother and break all the bones in his body. The tight link between music and politics for this man was truly inspiring.

JD: Zombie by Fela Kuti is probably the favorite, but bands like Gang of Four and U2 are certainly candidates.

SLUG: In your opinion, what should individuals of our age group (18 to 30) be reading right now?

JD: Magazines like The Nation and In These Times have been great inspiration to me. I think reading about American history, especially colonial history, can really put a lot of what is happening now in a new context.

In a post-interview e-mail, Chris suggested John Berger’s The Shape of a Pocket, a collection of essays that “humanize a wide array of social and political conflicts.” As this suggestion came back to me through the press agent, I was certainly nothing short of smitten with his genuine attention to detail. Furthermore, I was smitten with Q and Not U.

As both John and Chris addressed the acquiescent nature of political logic with the utmost eloquence, it was only appropriate to find out that the band’s name is also an example of such freeform postmodern thought. Though the concept of having a “Q” with no “U” is more closely associated with 20th-century linguistic thought, it certainly resonates with the daunting task of sorting through this nation’s current political rhetoric. But if your head won’t stop spinning, if you can’t make black or white of what you’re hearing (reminder: you won’t be able to), then find yourself a microphone.

Don’t miss Q and Not U (touring with the equally conscious and active El Guapo) at the Lo-Fi Cafe Oct. 24.