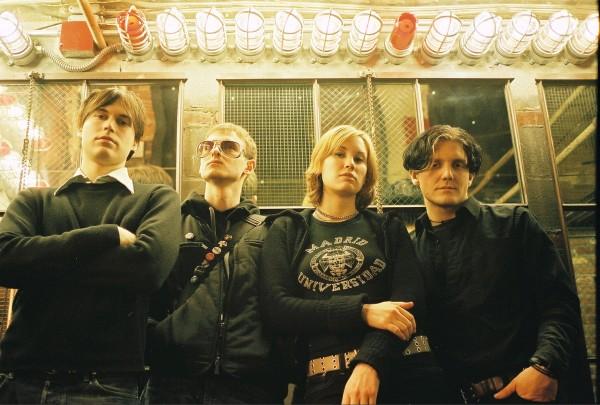 Stellastarr*: Straight on Till Morning Somewhere in London, Stellastarr* are making plans. I’m on the telephone rolling around on the floor. Bassist Amanda Tannen is taking the lead of the conversation. I can’t quite make out what is being said, but it definitely has something to do with a color scheme. Such is the life when you’re celebrating the last night of your European tour.

Torn from plotting world coordination to face the press, Arthur Kremer, drummer and keyboardist, takes to his task like a whipping boy celebrating yet another beating.

Stellastarr*: Hello? Hello, who am I talking to?

Well, maybe not quite like a whipping boy; he’s sort of like everyone else I’ve ever done a phone interview with. Only I’ve never interviewed a drummer before. Turns out he’s a better quote than a drum machine.

SLUG: How has the tour been?
Stellastarr*: Started off somewhat cold; figuratively and literally.

SLUG: Was it the band?
Stellastarr*: It was the audience, not the performance. They just didn’t respond.

Fortunately for the band, things became considerably more warming as the tour progressed. In Glasgow, the crowd was manic enough that he had a hard time hearing the drums as he pounded them.

Stellastarr*: We’ve had some crazy shows in America but [in the UK] they’ll tear the place apart. Maybe it’s the beer.

SLUG: What do you think it is culturally that makes UK crowds more energetic than their American counterparts?
Stellastarr*: They’re more exposed, more music savvy. It’s a small country with more going on and they have music channels that actually play music videos.

SLUG: Do you think American audiences will ever catch on?
Stellastarr*: I don’t know. There’s less of a scene in America. Except for on the coasts, there’s no real connection.

Sadly, he does have a point. MTV doesn’t introduce new music to anyone; radio is nearly as averse to taking risks. The small market kid has to fend for himself. Arthur does, however, point out that many of the more successful bands in the UK over the past few years have been American acts, some of which have gone on to have limited, but legitimate, success in America. Everyone talks about the next British Invasion, never stopping to think that perhaps the most recent installment was dominated by Americans who had to leave their country to get a chance. Just look to Interpol, The Strokes, Black Rebel Motorcycle Club and The Killers if you want quick evidence.

Stellastarr*: Nobody gets to know music anymore. It’s always on but no one develops a relationship with it.

I suddenly realize that this even applies to me. You might call it an occupational hazard, but I’m often so flooded with new music that the albums I truly love, like Stellastarr*’s Harmonies for the Haunted (which was in my top 10 of last year), get less attention than they deserve. When did I become so calloused to something I love?

SLUG: Harmonies for the Haunted has been out for awhile now; are you tired of the new songs?
Stellastarr*: It still feels new to me. We didn’t do much touring after the album came out, so the album still feels fresh, like nobody’s heard it.

The second record is always troublesome. This time around, Stellastarr* wanted a more cohesive record rather than a bunch of songs placed next to each other. It proved to be a completely different experience; nice studio, good producer. The results are clear, rather than the inspired but herky-jerky ride that the debut offered. Harmonies for the Haunted is a smoother ride that soars from beginning to end.

SLUG: How else has the second album been different?
Stellastarr*: There’s not a lot of buzz. We’re just another band. Sometimes you ask, does anyone care anymore?

We lament the traditional game of building up and tearing down of musicians that the mass media seems to enjoy so much. Forced to acknowledge that if you want to be successful, you have to not only play along, but somehow survive with a fan base that is more loyal to you than the writers who originally tout you.

Stellastarr*: We write music and what comes out, comes out. We don’t try to shove it in their faces. We did a lot of touring before we released the first album, went out of our way to avoid “the buzz” because we wanted a sturdy base.

Hopefully, they’ve established that base. They’re a band that fits in with the post-punk revival but aren’t as easily tied to the Joy Division or Gang of Four sounds. For this they should be celebrated, embraced and cherished, even if the mass media hasn’t told you it’s okay.

Stellastarr*, along with the UK’s new hopefuls The Editors, play The Depot April 22 before continuing on to Coachella.