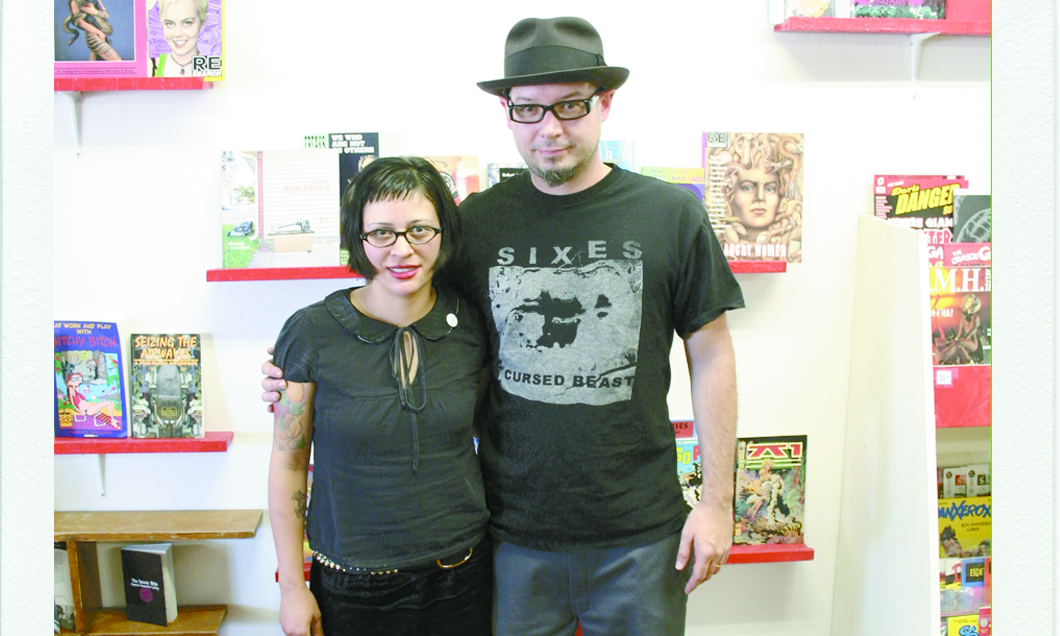 As Sugarhouse slowly devolves into corporate strip malls, ultimately pushing the small business owners out, many patrons of the area are already looking for an alternative free market. On March 1, 2007, Red Light Books was established in a small and uniquely artistic area near the heart of downtown Salt Lake City. While you might not find John Grisham’s latest work there, you’re certain to find something out of the ordinary that might perk your interest; whether it’s something like Muerte! Death in Mexican Popular Culture by Harvey Bennett Stafford or Sex Machines: Photographs and Interviews by Timothy Archibald, if it’s strange and wonderful, chances are it’s on the shelves at Red Light.
The idea of opening a bookstore hadn’t always been in the forefront of Jared and Tia Martinez’s minds. “ We honestly didn’t plan on doing this,” Jared said. He continued to explain, “ It’s funny because the people at Slowtrain suggested we check this place out, because we were talking to them about books one day.” After that, things started to come together quickly. “I used to run LionHead Records so I had some connections with distributors,” Jared said. LionHead Records started out as a label, before it became a record store that specialized in selling dub, reggae, hip-hop, jazz and some rock.“Tia was looking for a job because I work full time for a computer company. She stayed home with our kids and needed something to get out of the house. [The owners of] Slowtrain said ‘hey, there’s that place on the corner, the landlord seems really cool,’” Jared said. “ It kind of came naturally just being into collecting books and ‘zines.”Over the past few months Red Light has become much more than just a bookstore. They’ve participated in Gallery Stroll and featured the photography of Andrew Nelson and the Dead Baby Show by Ben Thomas in June. Thomas’ show consisted of baby dolls, and parts of baby dolls, in gruesome and uncomfortable poses and situations. There have also been several grindcore and crust punk shows held in the basement free of charge. “That first show we did was amazing, Catheter with Pacifist.” Jared said. Robin Banks, one of the store’s employees and a member of Pacifist, organized the show.

On Saturday, July 14 Red Light will be hosting a noise festival. “Noise could be described as a futuristic style that doesn’t have any remnants of other music,” Jared said, “there are a lot of different sub-genres like Smegma who [play] psychedelic ‘found sounds’ which are all cut up, versus a band like Merzbow that’s just a brutal wall of noise.” Jared got into noise while playing with Iceburn during the mid to late 90s; “We were kind of experimenting with different types of noise sounds. Our guitar player and drummer were from Minneapolis and they were into a lot of bands that I had never even heard of. Those guys introduced me to that kind of music.” Jared said.

As far as current noise music. Jared had many recommendations. “ I’d recommend Wolf Eyes for sure. If you check them out, you can be introduced to a ton of different music because each guy in the band runs their own label, and are friends with handfuls of artists, so there’s this weird inter-breeding between these projects.” Some other artists in the top of his list include SPK, Throbbing Gristle, Death Roes, and Whitehouse.

The Doon’n Sick Noisefest, organized by Jared, Tia and Aaron Zillionaire, will be held at Red Light Books on Saturday, July 14th at 7:00pm. Black Seas of Infinity will be headlining the showcase. The festival will also feature The Tenants of Balthazaar’s Castle, The Schwas, Breakers of Men, Zach & Jessie, Added Oil, Sterile Garden, AODL, Weak Sisters, Nosferatu (Eli Morrison/8ctopus Records), Waxen Tomb, Ghastly Hatchling, Nolens Volens, Norwhal and Gudgeguh. Local filmmakers will also be showing their short films between the musical performances. If you’re a big fan of the style, or curious about what noise is, this festival is not to be missed. Red Light Books is located at 179 East 300 South in the Broadway district of downtown Salt Lake City. To find out more about upcoming events visit their Myspace page at www.myspace.com/redlightbooks.