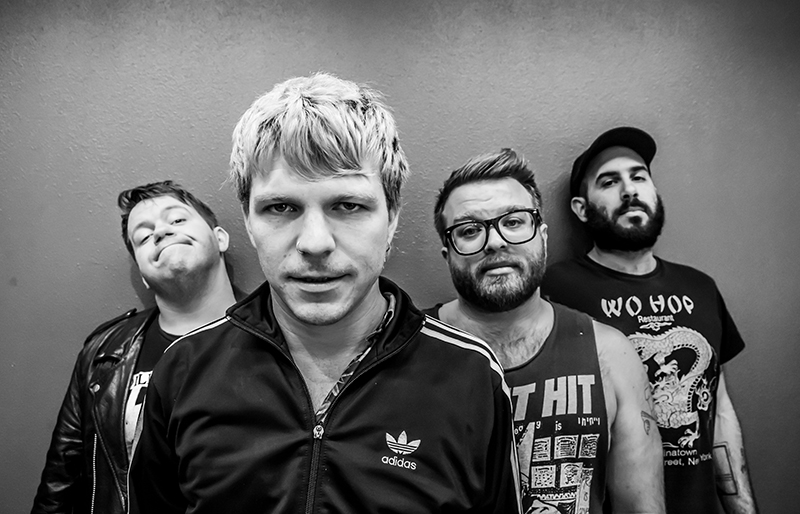 Style & Substance: Zach Quinn Tells Why PEARS has Both

The story of PEARS is a modern day rock n’ roll journey. They were a band for just over a year before Fat Wreck Chords signed them to their roster in 2015. They toured nationally before the release of their second album, Green Star, in 2016 and have been getting international recognition as one of the most fresh and diverse bands in the current punk/hardcore scene. Zach Quinn is the man who brings the insanity of PEARS’ music to life with his ferocious stage performance. Think peak Darby Crash and Iggy Pop, put them in a blender with Red Bull and cocaine and turn them loose on an unsuspecting audience. However, behind the veil of lunacy, Quinn is a mild-mannered, well-spoken individual, which just adds to his character and the dual nature of the band he fronts.

SLUG: First off, how’s the tour been going?

Quinn: Going good. We haven’t had a chance for anything to go wrong yet, but I’m sure it will. It’s a shame you’re calling me now instead of 10 days from now. We haven’t toured in six months, and we’re having about as much fun as the funnest part of any tour. This [tour] is only three weeks, so none of us have to burn out from being on the road and want to go home—it’s just the right amount of touring.

SLUG: The last time we spoke was roughly three years ago, and so much has gone on since the Go To Prison days and after the release Green Star. What is the biggest change you’ve felt, both as a band and personally, in that small amount of time?

Quinn: The biggest difference that we saw for a while was getting more support-tour offers, which I think has to with the distribution that Fat [Wreck Chords] has given us. We played a lot of these massive shows for a while, and I guess now we’re trying to condense everything into smaller tours and have fun doing it. We really ran ourselves ragged for a while. There was something cool about being like soldiers doing it that way, but at the end of the day, it wasn’t worth it. You end up spending so much of your time, energy and effort, and it spreads you thin. I feel that concentrating your effort is a smarter way to do it. I wouldn’t have believed that three years ago; I would’ve thought there’s no such thing as spreading yourself too thin.  I felt like we were always good about being troopers through sets, regardless of how fucking tired or depressed we were, but it’s nice to feel good during a set, to be excited to play and not like “Oh this is the 40th time we’ve played this song in 40 days.” That’s another thing, too—the more music we put out, the more we can change the set.

SLUG: What are some places you thought you were never going to be able to play but have?

Quinn: That’s kind of a tougher question, because I’ve kind of expected to play everywhere. At least that’s what I wanted to do. Still, it’s been mind-boggling to make it to places like Europe and Australia. I think a place I hadn’t pictured myself playing was Barcelona, and we did that last year, and it was amazing. Another place I wouldn’t have expected to play was Tijuana. I feel like we’ve been nothing but lucky in that regard.

SLUG: It really seemed like lightning struck with everyone in your band being in the right place at the right time. You guys weren’t really a band for that long before you started getting some momentum going.

Quinn: Sure, we were lucky in that way. We had a lot of people helping us through that, too—just being surrounded by good, smart people and also just being monsters. I feel that live shows are more important for bands because of the over-saturation of the internet. If you’re not right in front of people, it’s basically the only way to get their attention. The only downside is right now I’m “67” and I don’t even know how that happened. I feel that that’s the most important thing a band can do, and I feel that we are living proof of that.

SLUG: That’s another thing with PEARS. Hearing the albums is awesome, but then people see you live and realize how truly insane you guys are.

Quinn: Yeah, that’s another thing—”don’t suck!” You can tour as much as you want, but if you’re not paying attention to the work, then it’s not going to matter. If you don’t act like you love what you do, then why should anybody else? You need to get together on both fronts—you can have style, but if there’s no substance it’ll be fleeting. Art is a form of expression, and if you’re not expressing yourself, then you’re just making product.

SLUG: What’s the response been like when you play in new places in front of people who’ve never heard you? What stands out the most?

Quinn: Always weird shit. I think that people who are weird enough to want to talk to me after I perform are bound to say weird shit for the most part. Mostly, I get comparisons like “You’re like Iggy Pop or Mick Jagger,” which is cool, but what else can I expect them to say? It’s not like they can hear or understand anything I’m singing. So what they have is the performance, and I’m emulating everything I ever thought was cool in frontmen.

SLUG: Speaking of comparisons, do people ever tell you what type of bands you sound like?

Quinn: No, because I think that’s a tougher thing. We don’t really get a lot of comparisons. PEARS sounds like “blank”—I can’t think of anything that strikes me as sounding a lot like us. There’s a little bit of that A Wilhelm Scream and some classic Fat stuff like NOFX and Lagwagon that’s kind of there. Also, old ’81 hardcore stuff. I feel like it works because it’s honest; we never hit it from an angle of what was or wasn’t cool right now. I feel that everything that we like is in there because we didn’t run a filter through anything.

SLUG: What’s the new material sounding like? Do you feel it’s veering into new territory or staying within PEARS’ sound?

Quinn: We have lots of parts but nothing finished right now. That’s actually the next thing on our to-do list. There’s stuff on the horizon. It’s too early to tell [what it’s going to sound like], but I would imagine that it’s going to be the third page in the same book—the same way Green Star made sense after Go To Prison and was its own thing.

SLUG: Do you ever feel that PEARS is going too fast? Is there a fear that you’re going to burn out as quickly as you came in?

Quinn: Absolutely, I have thoughts like that. But, as long as there are still PEARS records to make we’ll keep doing it. There’s not a doubt in my mind that one day we’re going to say there’s not another record to make. I’m pretty sure that’s far down the line, but I’ve thought, “Are we going too fast? Are we going to burn ourselves out? Are we going to run out of ideas?” So far, we’ve always found ways to keep it fresh and exciting, so not anytime soon.

As much pride as Quinn takes in his work, he still feels forever in debt to the people who’ve bought records, came to shows and expressed their admiration to him. PEARS are special for me because I’ve watched them as they’ve evolved over the few years they’ve been a band, and I feel like they are making their mark. Be sure to see them tear it up at Kilby Court on May 27—you don’t want to miss this show!