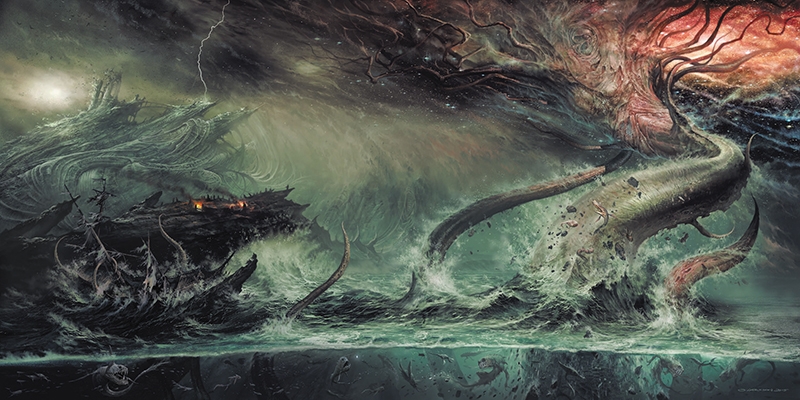 Sulphur Aeon Open the Gateway to the Antisphere

When I first heard Sulphur Aeon’s Swallowed By The Ocean’s Tide, I couldn’t stop listening to it. I found myself drawn to it, as if compelled by some mysterious and alien intelligence that sought to corrupt my weak, human mind. Imagery of Elder Gods and reality-shattering horrors abound in their death metal incantations. At the risk of awakening powers that best lay dead and dreaming, SLUG contacted Sulphur Aeon to discuss their upcoming album, Gateway to the Antisphere.

SLUG: How did the members of the band first get interested in the Cthulhu mythos and cosmic horror?

Sulphur Aeon: There was no real initial event that got us into the works of H.P. Lovecraft. I guess, as movie fans, it was primarily because of some horror flicks from the late ’70s and early ’80s: Fulci’s The Beyond and City of the Living Dead and, of course, Stuart Gordon’s stuff, and, most eminently, the lyrics of favorite bands like Morbid Angel or even the instrumental “The Call of Ktulu.” When you listen to metal, and mostly the extreme stuff, you just have to stumble across Lovecraft. Because of those factors, we’ve started to explore more of his stories. When thinking about a lyrical concept for Sulphur Aeon, it was the one topic we both [guitarist/bassist T. and vocalist M.] instantly agreed on.

SLUG: What attracts you to darkness?

Sulphur Aeon: Not easy to answer. Why do we listen to extreme and dark music? Why do we like horror movies? I guess it’s just something that is part of human nature. In some, it’s more prominent; in some, it’s not. Everything we like about art … is dark. We are no psychologists, and none of us has ever asked himself, “Why the fuck do I watch this, or why do I listen to that?” In darkness, there is something hidden … something obscure that wants to be discovered. The light reveals anything, thus, no exploration is needed. No excitement. In contrast to that, we are not necessarily dark people. We don’t sit in dark chambers all day to study occult literature. To close the circle, when it comes to art in any form, it’s solely the darker embodiments that attract us.

SLUG: Ola Larsson’s cover art for Swallowed By The Ocean’s Tide is as fascinating as it is frightening. How did you discover his art?

Sulphur Aeon: We adored what he did for Disma and thought, “This is exceptional.” We simply asked him and were quite surprised when he agreed. It all worked out simply fantastic, and we were even more excited when he said he would do the second album, too, BEFORE we asked him. There’s a whole bunch of talented artists, but we think Ola is the one artist for us. He really gets into what we want to express with the artwork. It’s a very easy and pleasant collaboration. It’s fun to work with him, and we are very thankful and honored that he works for us in his busy schedule. By now, the cover for the upcoming LP is almost done.

SLUG: Tell me a little about the album Sulphur Aeon just finished recording—how is the album different from Swallowed By The Ocean’s Tide?

Sulphur Aeon: It’s always hard to describe your own music—I guess the sinistrous vibe has increased a little, as did the overall speed. We’ve given our drummer, D., quite some exercise there … It’s not a change of style—it’s merely the next logical artistic step in our evolution. We think we’ve managed to transport the most important aspect of Sulphur Aeon’s music throughout our new album as well. Atmosphere: We want to deliver real, recognizable songs with a dark, brooding and violent nature. Most of the lyrics thematize the unspeakable communion of Yog- Sothoth and Cthulhu—the rise of Cthulhu into the cosmos and its consequence, the awakening of the great old ones, resulting in the ultimate extinction of mankind. Furthermore, we have adapted “The Dream-Quest to Unknown Kadath” as a song trilogy.

SLUG: Finally, do you have anything you’d like to say to your fans in the U.S.?

Sulphur Aeon: We want to thank all fans in the U.S. and overseas for their dedication and support. We hope that our releases will be easier to purchase in the future, which seemed a bit difficult in the past. Ia Cthulhu! Ia Yog- Sothoth!

You can check out the creeping chaos of Sulphur Aeon’s back catalog at sulphuraeon.bandcamp.com, and keep an eye out for Gateway to the Antisphere, which initiated the ritual of cosmic corruption on April 3!