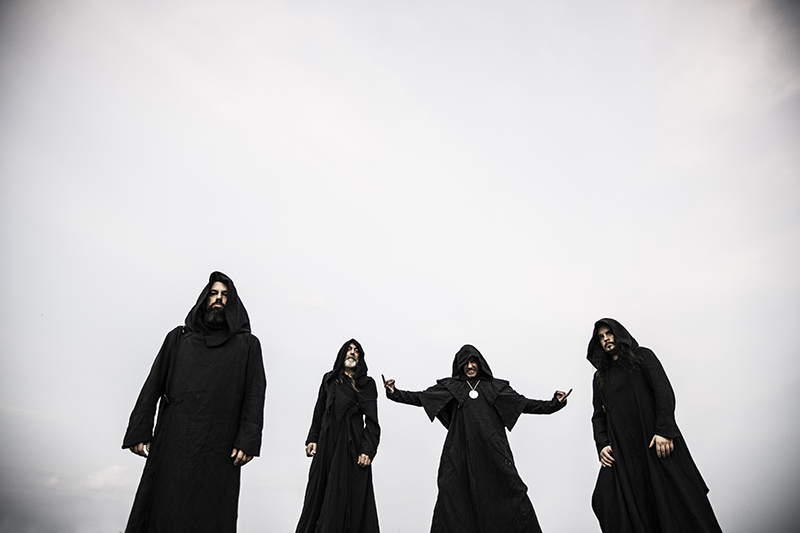 For almost two decades, Sunn O))) have steadily shifted the geography of heavy music. In anticipation of their new album, Kannon, SLUG spoke with the band’s guitarist, Greg Anderson, who is also the owner of Southern Lord Records. Implicated within a network of collaborators, the core of Sunn O))) are Anderson and bassist Stephen O’Malley. Both are veterans of numerous punk, metal and otherwise ear-altering bands and projects who “have always marched to the beat of our own drummer,” Anderson says, “though with Sunn O))), we don’t even have a drummer.”

There is an unstated but deeply felt ethic behind the sound of Sunn O))). “It’s the same with the music I release on Southern Lord,” says Anderson. “It’s not fake. It’s not bullshit.” Despite his zeal for authenticity, Anderson insists that his is a no niche label. He claims to be obsessed with music of all kinds, anything from jazz to country. “To focus on one specific sound, that’s not who I am, and the same could be said for all of Sunn O))),” he says. “Stephen and I, we’re seekers.”

This quest is manifest in Sunn O)))’s forthcoming Kannon. While it maintains the band’s essential monolithic sound, the new album shines as a stone of many facets. The production is brighter and cleanly cut. Individual instruments are more discernable, and less lost within cavernous acoustic washes. Further, each of the album’s three tracks contains a greater number of musical events, some of them reminiscent of limpid moments in Glenn Branca symphonies. The overall effect is a heightened sense of structured drama. Though he insists that such results were unintentional, Anderson readily accepts the description: “Exactly,” he says. “Kannon stands as a record whose force lies in its concision. At first, what felt powerful to us was the sludge, the constant bludgeon and throb. As we matured, we discovered power and heaviness in rifts of silence and bursts of light. Stephen and I even joked about calling our current music life metal.” Laughter ensues.

From its inception, Anderson says, Sunn O))) jettisoned traditional instrumentation, song structure and any musical conventions designed to evoke a specific reaction or entertain an audience. “We create music spontaneously and naturally and never bend to any outside pressure or public expectations,” he says. “What we do comes from a primal peer relationship between Stephen and me.”

Anderson says that his other bands—most notably Goatsnake—do intend to please the crowd. “I fucking love playing with them, but in a rock band like that, you do want the audience to get into it,” he says. Meanwhile, Sunn O))) have never sought any kind of approval. Despite this indifference to appeal, Sunn O))) have not only endured but indeed amassed a sizeable following. The band, to Anderson’s surprise, became more successful than anything he or O’Malley had previously done. “I’m grateful for it, but we still adhere to our early ideology, which has always been to do things on our own terms,” says Anderson.

Sunn O)))’s albums, up to and including Black One, became ever more extraordinarily dark. With the following release, Monoliths and Dimensions, the band began to embrace the light. Anderson hardly denies the enduring allure of darkness. “I’m totally attracted to it, and my favorite music remains the darker stuff,” he says, “but darkness has become an easy attraction. We hope this new turn to the light will, ironically, make Sunn O))) even more powerful.”

Artistic alliances are crucial to Sunn O))). “Our collaborators are chosen out of mutual respect,” says Anderson. “In many ways, they continue earlier projects.” As for teaming now with sculptor Angela Lafont Bolliger and photographer Estelle Hanania to create Kannon’s cover, Anderson attributes these connections to Stephen O’Malley. “Stephen is an amazing designer and our visionary. The graphics that you see, the T-shirts—that’s all Stephen’s work, while I run the business end of things. But everyone has a role, and, aside from booking, we do everything ourselves.”

A prominent feature of Kannon is a substantial textual component. “Stephen and I always thought the liner notes to experimental jazz records made awesome companions to the music,” says Anderson. “We thought, ‘Why don’t we try that?’” In Kannon, the notes come in the form of an essay by performance artist and theorist Aliza Shvarts. “She wrote a feminist perspective of our group,” says Anderson. “I was really blown away by that.” By making this theoretical statement a prominent component of the total package, Sunn O))) seem set on transforming how listeners understand and discuss heavy music. For Anderson, the heavy music scene has too often functioned according to a set of unstated but understood “rules of metal.” “There are no rules,” he says, “and combining disparate mediums goes hand in hand with that.”

While Anderson does see packaging Kannon with extensive liner notes as potentially didactic, he doesn’t consider that condescending. “Maybe those jazz artists understood that their music was challenging and the public needed some guidance,” he says. To be sure, the amount of music and information bombarding the public today can indeed be overwhelming. Commenting on this, Anderson says, “To me, it can be comforting to have someone say, ‘Hey, let me give you a tour.’”

Sunn O))) will begin their tour at the beginning of next year. The band expects to reach Salt Lake in March or April. In the meantime, Kannon will be available from Southern Lord on Dec. 4.