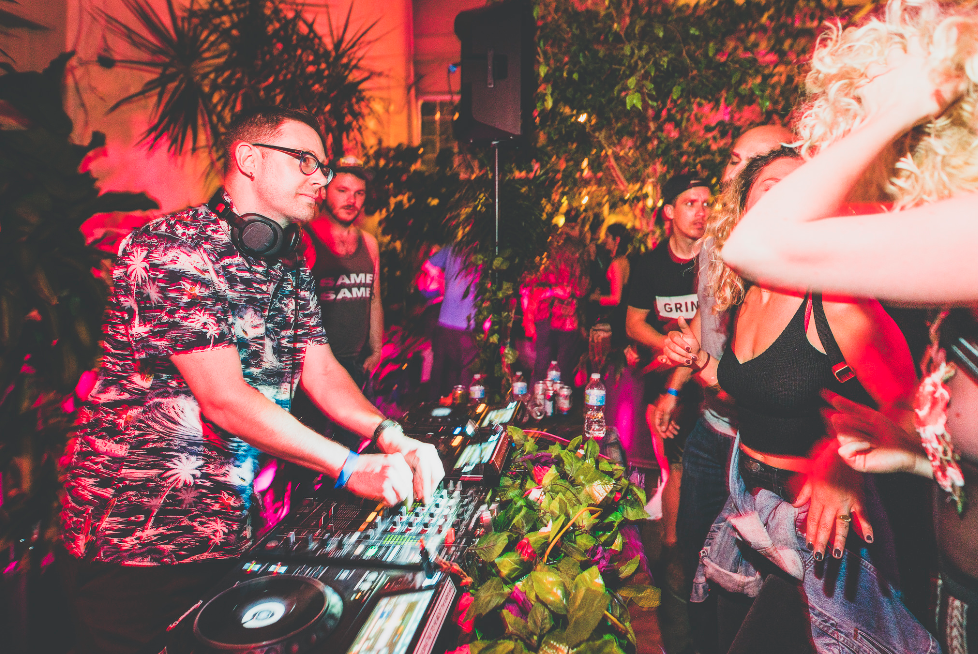 For years, Salt Lake City has been blessed by the presence of Jesse Walker, a local DJ and the pride and joy of our gay community. His charming personality and affinity for throwing some of the most memorable house parties in town have made him a local legend in the EDM community. With his event Supernature quickly approaching on Saturday, Oct. 14, Walker/New City Movement will feature some of the major players in deep house and one of the founders of the gay techno scene in America—Honey Soundsystem’s Jason Kendig. It’s the end of 2017 and the world might be looking bleak, but at least we have an incredible night of sweating on the dance floor to look forward to before the true rapture.

SLUG: Tell me about how and when Supernature started.
Walker: “Supernature” is an old high-energy disco track by CERRONE that I first heard covered by Erasure in the ’90s. I have an undying love for that song and was keeping it in my back pocket for inspiration. That day came when Equality Utah asked if I wanted to collaborate on a kick-off party for Utah Pride this past spring (2017). Our friend Serge (of Salad after-hours) had mentioned he could connect us with Paradise Palm as an event space, and we knew we had to make it happen. I brought Mauricio Aviles (SF) to play with us that weekend, and history was made. 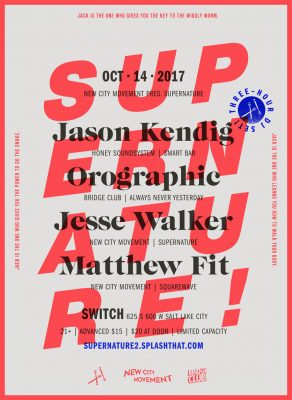 SLUG: What’s your overall goal with the event?
Walker: The goal is to fire creatively on all cylinders while exposing people to new music and ways to party. Gay nightlife can always use an injection of fearlessness and originality. Utah was going strong in the ’90s as a major stop-through for DJs and clubbing. We’d like to revive the gay house/techno scene without drawing too many lines and help put SLC back on the radar.

SLUG: Salt Lake should be very excited for some of the big names you’re bringing to Supernature. How were you able to lock down such strong acts?
Walker: As they should be! Getting Jason Kendig and Orographic here was an act of faith, networking and a team effort. Our friends Jason Sanchez and Alicia Savage, both recent transplants from the Bay Area, approached us to help make Supernature happen again after they attended the first party.

Matt had seen Honey Soundsystem play a few times and recommended Jason Kendig, known for straddling the line between deep house and techno, and who I was already a big fan of musically. Rob Loucks (Orographic) and I DJ’d an event in Green River the summer prior, and I recalled he knew the Honey gents from bringing them out to his BRIDGE CLUB’day party in Portland, so we asked him to put us in touch. It seemed like a good idea to just have Rob come be part of the fun while we were in the process.

The genesis of it all was Matthew and I were really inspired to bring someone with broad range and taste level after we’d heard Mike Huckaby (a DJ’s DJ from Detroit) play an eight-hour set at DEEP CLUB in Denver last Spring.

SLUG: How has Jason Kendig and his queer artist collective Honey Soundsystem influenced you and ultimately the music scene here in Utah?
Walker: Honey Soundsystem has been visible on the scene for some years. For me, as a gay man living in SLC with friends on the coasts, you hear and read about their parties all the time … along with A Club Called Rhonda (L.A.-based insanity). These crews have a level of commitment to the “art of partying,” as you might say, that is unmatched, going back to the heyday of disco—but reinventing it for today: fantastical decor, larger-than-life personalities, unchecked resplendent hedonism. They’re taking back the roots of house and techno, which started in the ghettos of Detroit and Chicago by the homos.

It resonates with me because I’ve been part of parties on that level (for Utah) here in the past (Wild Planet, Just Wanna Dance, for instance) coming from our many awesome collectives that are coming up in Salt Lake. Everyone is giving 110 percent, and it feels like the timing is right to push it hard.

SLUG: I attended the previous New City Movement event at Paradise Palm and I had a blast. With this show being hosted at SWITCH, are you hoping to keep the event locations changing, or are you hoping to lock down a more permanent venue? Can you elaborate on what you look for in venues?
Walker: A more permanent venue would be amazing. Having the support of Equality Utah was a huge help in the beginning, and now with our team helping and SWITCH getting their liquor license, we can hopefully look to them and other venues in the city for legitimacy. SWITCH has the best club sound system in the city, thanks to the dedication of Jake Bergeson and Gabe Arellano and their three years running Quality Control. From day one, I knew these guys had good intentions and the right attitude to level up the scene, and we’re standing on their shoulders in a way.

SLUG: What ideas or trends are you hoping to bring to Salt Lake with events like Supernature?
Walker: An anything-goes sense of fun on the dance floor. Not just for getting messed up and losing it … but for being creative for creativity’s sake while expanding the knowledge and depth of dance music and culture. Be yourself. Respect others’ freedom. Thankfully, Salt Lake rarely has issues with people of all persuasions in the same club. I’m consistently amazed by how accepting and friendly people are to each other after the sun goes down here.

SLUG: We’ve seen collectives come and go in Salt Lake over the years. What helps sustain your enthusiasm for bringing underground house to the residents of Salt Lake?
Walker: I guess I still get a thrill from being out after curfew. The darkness is a unifying force where people of all stripes get to feel “bad” without acting very bad when it comes down to it. I thrive on meeting new people and watching their stories unfold. Helping connect interesting people to make something great is the best thing ever. And the music … still an addict—want more and more people to feel what we DJs feel in the heat of the night. Bringing in talented DJs helps transform perceptions of what’s possible in a given scenario.

SLUG: If you could say one thing to people to encourage them to attend, what would it be?
Walker: Be yourself. Be free.

SLUG: Why do you think attending and supporting events like these is important to our community?
Walker: Because life is damn short. It’s generally boring. So get out and bust your butt to be part of something way more interesting and eyes- and ears-opening.

It takes a village, and it’s definitely not cheap or easy to produce events. Your support is the smallest possible way to ensure our success. Tell a friend. Plan your outfit. Read about the artists before you come and get engaged on a national, international level. Thank you, internet!

SLUG: The last event I attended had a killer vibe, awesome lighting, and cute boys making drinks. Can we expect some of the same atmosphere at the upcoming event?
Walker: Different atmosphere. Different art direction. But don’t you worry, we’ll have all the cute boys you can handle!

SLUG: What can we expect from Supernature in the New Year?
Walker: We’re playing it by ear but hope to keep the ball rolling. This will be a good test of our metal, but I have a good feeling about it.

Be sure to get yourself down to the next Supernature event for a full night of ass shaking on Oct. 14 with sets from 9 p.m.–2 a.m. The event will be held at SWITCH, located at 624 S. 600 W. RSVP and get your tickets before they’re sold out at supernature2.splashthat.com, and be sure not to forget your ID.