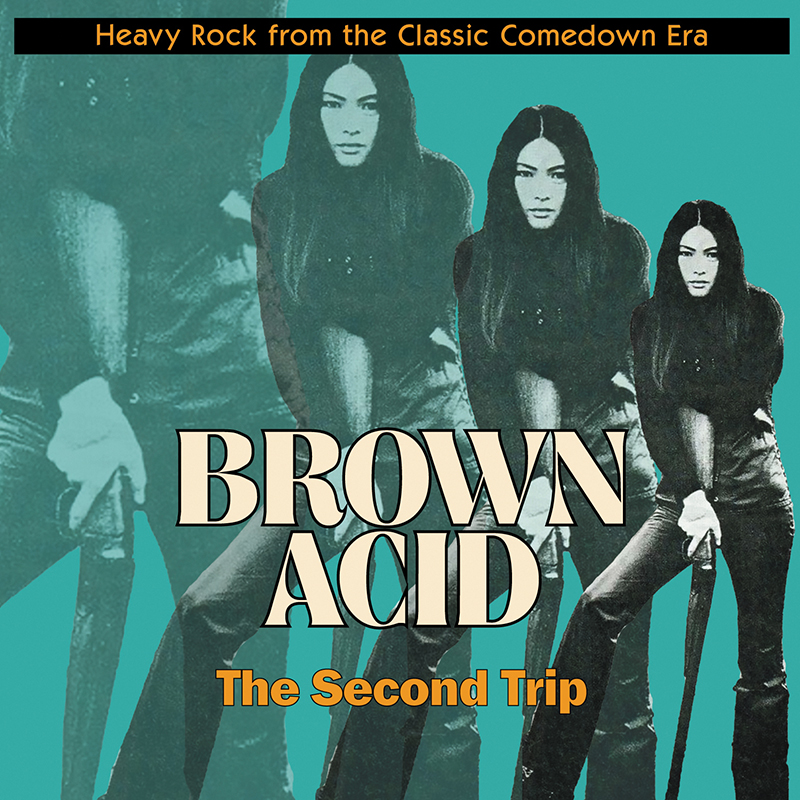 Psych rock fans can get a taste of the new, tailor-made tracks via Consequence of Sound on April 20 for the next edition of Brown Acid.

In the early ’70s, the tone of America’s counter-culture was getting pretty dark, and understandably so. Hippies were being drafted, the decades-long economic boom had become barely a whisper, and social activism was boiling the blood of concerned citizens of all persuasions. The music, though—hot damn. At least, that’s the opinion of vinyl collectors/entrepreneurs Lance Barresi (co-owner of retail store Permanent Records) and Daniel Hall (of the RidingEasy Records label). The two have both spent countless hours of archaeological research to produce their latest compilation of virtually unknown proto-punk and stoner metal artists from their golden age. “I always want to explore the furthest depths of the possibilities in any given genre …” says Barresi, “[so] a lot of the stuff we were trying to dig up doesn’t appear in the wild.”

Barresi and Hall are both Los Angeles–based DJs who’ve been big fans of psychedelic rock throughout the course of their friendship. However, the idea to start the Brown Acid series came from a shared interest in discovering rare vinyl. “I have a weekly DJ night at the Black Boar in L.A., and I primarily play hard rock and heavy psych, so I was already collecting a lot of stuff that showed up on Brown Acid,” says Barresi. “Sometimes, the only way for me to get some of the 45s was to track down those who were involved [in creating it].” Barresi’s direct strategy became crucial for him in discovering new music without having to go through the hassle of dealing with other competitors. As a result, he had also been accumulating valuable contacts over time who would eventually help to make the compilation possible. Says Hall, “Yeah, we were just hanging out one day, and [Barresi] had a copy of a record I had been looking for for a long time, and I was like, ‘How the fuck did you find this?’ and he goes, ‘Oh, I just called the band, and they had a copy in their garage.’” Stunned and excited, Hall offered to form a unique partnership to help Barresi find other long-lost musicians and license those who contributed to this valuable moment in music history.

As it turns out, the task of both locating and licensing vintage tracks is easier said than done. Barresi and Hall took note of similar compilations beforehand, such as Nuggets and the Bonehead Crunchers series. While Nuggets sought after already known and signed artists, Bonehead Crunchers unfairly bootlegged from many of the underground bands they featured. For Brown Acid, Barresi and Hall wanted to get original copies of the artists’ material and make sure that all bands involved were being paid fairly for the use of their music. However, this commitment can be daunting, considering the patience required for getting ahold of long-since-folded label companies, the names of unaccredited artists, family members of deceased musicians or even a living, psych rock veteran who can adequately manage their email. Nevertheless, the two were surprised to have gathered enough material for at least five or six installments of legitimately licensed and remastered tracks from amazing nobodies like The Todd, Ash, Raw Meat, Crossfield, Lenny Drake and many more.

Now that they’re approaching the second pressing for Volume One, both of the guys behind Brown Acid are excited about the reactions that they have been receiving from fans as well as other collectors. For Barresi, his commitment to the search for new music comes from a place of admiration for the bands. “I have always wanted to dig as deep as I possibly can into everything that I’ve ever gotten interested in,” says Barresi. “I found that I discovered the underground stuff to be far more interesting and appealing than the mainstream level … It’s more endearing and real when people are doing it all for the right reasons regardless of whether there was commercial appeal there or not.”

Hall—whose label, RidingEasy Records, signs modern bands of this genre—agrees that the connection to the music is deeply personal. “Brown Acid is important to me because this type of sound is the blueprint for how RidingEasy is now and the new bands that I have signed,” says Hall. “Back then, you were either on Columbia, Warner Bros., etc., or you weren’t gonna get a shot … It’s special to me to have these relics [because] they could have been any of the bands on my label, had they been playing now.”

The second volume of Brown Acid releases on—wait for it—April 20, just four days after Record Store Day. For both collectors, Record Store Day is a nice reminder for people that businesses—like Permanent and RidingEasy—still exist. However, both labels are still open for business just about 364 more days out of the year, and it’s more important to remember that community involvement is what has made record stores so essential before the time when playlist algorithms could suggest music for you. “We [record store owners] curate a selection of vinyl records for people who are into the format and are into finding out about different stuff—whether that means a classic record that they never got around to listening to yet, or a crazy-obscure 45 like on Brown Acid,” says Berresi. “You’re going into a library specifically curated by the person behind the counter who is knowledgeable about everything that happens to be in the store at any given time … That’s pretty priceless.”

Psych rock fans can get a taste of the new, tailor-made tracks via RidingEasy Records on April 20 for the next edition of Brown Acid. Learn more at permanentrecordsla.com and ridingeasyrecs.com.

Correction: April 1, 2016
An earlier version of this article misnamed RidingEasy Records as a retail shop. As discovered and amended, RidingEasy is the label on which Brown Acid will be released.