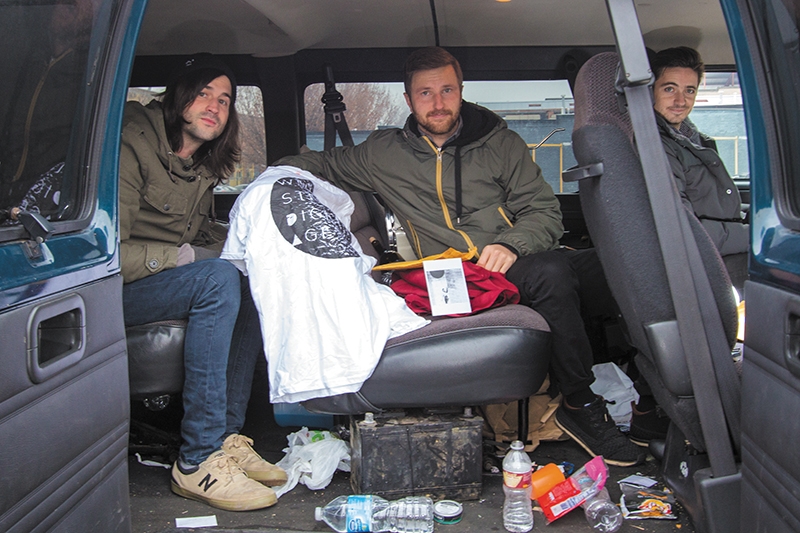 Tales From The Merch Bin: Wildcat Strike’s Tips For Tours

SLC rock band Wildcat Strike have been on two tours and have played a handful of shows in neighboring states. Members Tony Lake (vocals, guitar and keyboard), Jake Rosevear (bass), Jordan Mendenhall (guitar), Will Tuddenham (keyboard, guitar) and Joe Plummer (drums) have not only managed to build a sturdy fanbase and release two albums in the last three years, but they have been able to cover all their costs and even pocket a little from their efforts. They’ve bolstered their merchandise acumen with a reputation for being a riveting, energetic live act. Lake says, “We write songs to be high-energy and rhythmic, so when we see people dancing, it gets us excited, and I think it really reflects in the way we play.” Attending one of their shows may induce one to take home a CD, or at the very least, a Wildcat Strike temporary tattoo designed by Tuddenham. Here are their tips for making the most of merch sales.

Tip #1: Be resourceful.
Merch is a big upfront investment. “You just sit on that for a long time,” Rosevear says. Wildcat Strike printed up 200 CDs each of both of their albums, which is a relatively small run. Many presses require at least that many. If you can leverage some connections, it can cut some of your upfront costs and make it easier to recoup your money. Wildcat Strike had friends offer to do the cover art for both albums. “A lot of professional bands pay for that service,” Lake says. If you do have some extra cash and want a good return on investment, the band recommends printing some shirts.

Tip #2: Bring a partner.
Lake and Rosevear brought their wives, Sophie Lake and Fernanda Rosevear, along for their first tour. While the band was setting up and performing, the lovely ladies were laying out the merch. “We were a lot more organized because we had people helping us,” Rosevear says. “We made plenty of gas money selling T-shirts and CDs.” If your helper is good at presentation, all the better. “Our wives had sizes, they had gender, they had it all labeled. That’s why we sold, because they gave a damn,” Lake says. If you’re not in a relationship, bring a friend. Not only does having a dedicated merchperson help with Tip #1, it means you can make sales while the band is loading the van.

Tip #3: Put on a good show.
The Wildcat Strike philosophy is that merch is a tangible reminder of a great performance, according to Lake. “If we’re on point—and not even if we’re playing that well, but if we have the confidence—people want to get behind that because it’s exciting,” he says. “They want to believe that we’ve captured that on the album.”

Tip #4: There’s no time like the present.
Tell your fans to seize the moment. “That’s the formula. You’re onstage and say, ‘Go right now and buy that shit!’” Rosevear says. Interest fades fast, so direct them to the merch table before that happens. It also helps to have the table in a good location out in the open.

Tip #5: Don’t give merch away.
“We ended up giving a lot of CDs away on that trip,” says Rosevear of their second tour. “In the morning, we were like, ‘Damn it, that was gas money,” he says. Try to keep the long-term in perspective when at the bar making friends—otherwise, you may be sleeping on a bathroom floor when you can’t afford a hotel as Rosevear did.

Tip #6: Don’t rely on door money.
Club owners can sometimes disappear after a show. “Then you realize they’re not going to pay you,” Rosevear says. This could leave your band with only the money from merch sales to get you to the next town.

Tip #7: Have fun.
If you’ve had a good night, enjoy it. On their most recent tour, one of their most memorable nights was when the bar allowed Wildcat Strike to buy shots for all 20 people there for a dollar apiece. “It keeps it fun,” Lake says. “Tour is a lot of work. We’re trying to eliminate the drama that can creep up on bands.”

Tip #8: Play in Boise.
“People were enthusiastic in Boise. People were pumped to buy shit,” Tuddenham says. “They didn’t have their phones out—they were ready to listen and dance. Everyone was excited. If we ever go to Boise and don’t have merch, that’s a huge mistake.”

Wildcat Strike is playing Bar Deluxe on March 25. You can buy their latest album, Digital Age, at their show or online at wildcatstrike.bandcamp.com.