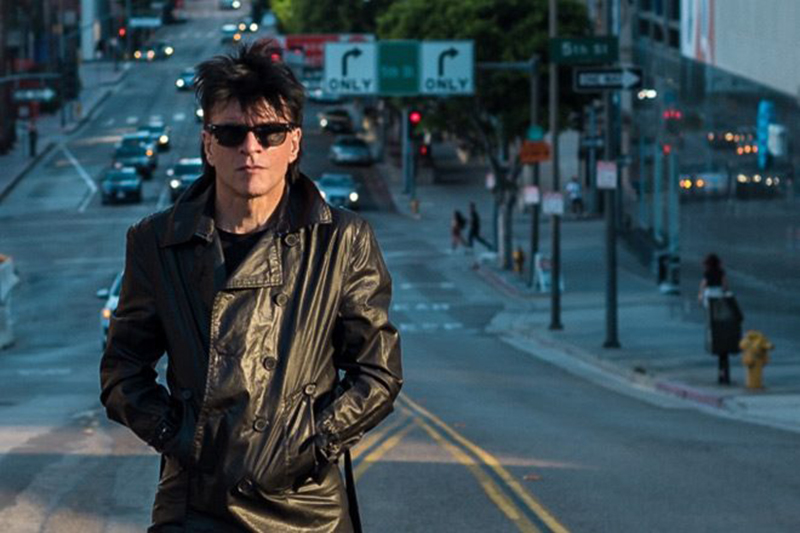 When Jay Aston’s Gene Love Jezebel strolled through Salt Lake City with The Alarm in August, my hectic schedule kept me from talking with Aston about the revitalization of his version of Gene Loves Jezebel. The new group features guitarist James Stevenson and bassist Peter Rizzo from the group’s classic line up. It was a grueling tour, and the last thing I expected was to see Aston picking up an acoustic guitar and heading back out on the road as part of the Chameleons Vox and Theatre of Hate tour across North America. “I know Mark Burgess and all the guys in Theatre [of Hate], they just asked me to come up and I said, ‘Yeah, let’s do it.’ It’s very exciting to me,” says Aston.

It’s mid-August, and I’ve caught Aston as he and the Jezebels drive between tour stops. The sound of the highway somewhat obscures his Welsh accent. Up until last year, Aston’s Gene Loves Jezebel hadn’t released new material since 1999. The group hadn’t toured North America in a decade, and Aston’s solo acoustic performances were infrequent and tended to be located in areas within reach of London or Los Angeles.

This upcoming show will be Aston’s third performance in Salt Lake City in the past two years. It’s refreshing to be able to see him perform, but what caused the extended absence and what changed in more recent years? “I’d become very jaded, that’s for sure,” says Aston. “I smoked too much, drank too much and lost interest in performing. And then something happened one day. I heard a Suede record or something on the radio and I thought, ‘My God, someone who can actually sing!’ And I think that inspired me. I thought to myself, ‘That’s the one thing I’m good at—singing.’ So, I stopped smoking, just stopped drinking and worked on vocal techniques to regain my former glory.”

“I find myself getting really close to my songs when I do them on my own.”

One of those things was guesting on former Gene Loves Jezebel keyboardist Jean-Marc Lederman’s La Femme Verte project in 2010, where Aston sang the Rolling Stones track “Moonlight Mile” with Julianne Regan, another former Jezebel who went on find fame with All About Eve. “The reaction was really strong; it kind of woke me up really,” he says.

Aston began working on songs with Jezebel bassist Pete “Bugg” Rizzo that would be released in 2011 under the moniker of Ugly Buggs. During this period, Aston started playing the occasional “odd gig,” where it was just him and an acoustic guitar. It was an exciting and scary experience. “I find myself getting really close to my songs when I do them on my own,” he says. “You’re really on the edge, it’s risky and you’re naked and I just loved that.”

Aston describes his new solo act as a work in progress. It’s even a departure from his two solo releases, 1998’s Unpopular Songs and 1999’s Jezebel. Those albums featured other musicians. His solo shows are far more experimental. “The most important thing is connecting with the moment, how you feel in that moment on stage,” he says.

He recalls his first acoustic performance in Brighton, England, as a complete disaster that nearly put him off of the idea of ever doing it again. “I hated the gig, I thought I was awful,” he says. Why am I bothering? I’m rubbish. Then a friend of mine who taped it, put it up on Youtube, a song called ‘Lil’ Sheltered Girl.’ I just happened to catch it and at first I was going to get angry that they put it up there, but then I saw that I was actually quite good.”

“I do enjoy singing songs in the way that I first did them in the basement of Old Brompton Road in London.”

Those hoping to hear a Gene Loves Jezebel track or two need not worry, as Aston does like to work in a classic track here and there. “I do enjoy singing songs like ‘Stephen,’ things I’ve written like ‘Sweetest Thing,’ those kind of songs in the way that I first did them in the basement of Old Brompton Road in London,” he says.

The Chameleons Vox, Theatre of Hate and Jay Aston tour kicks off in Toronto on Friday, Oct. 11th and snakes its way to Salt Lake City for a show at Liquid Joe’s on Wednesday, Oct. 16.