SLUG Mag Soundwaves
Episode #389 – Bobo
00:00 / 17:54
Spotify Stitcher
RSS Feed
Share
Link
Embed
After a six-month hiatus, INVDRS, one of the region’s most remorseless rock acts, is back, and in fighting fettle. For almost five years, INVDRS labored to establish itself as the musical embodiment of primordial violence, a stated goal for which they offer no apologies. “We don’t hold back,” says drummer Gavin Hoffman. Their album, Electric Church, and their live shows stand as the twin testaments of their gospel of redemption through destruction.

That Mighty Sculptor, Time: The Return of INVDRS 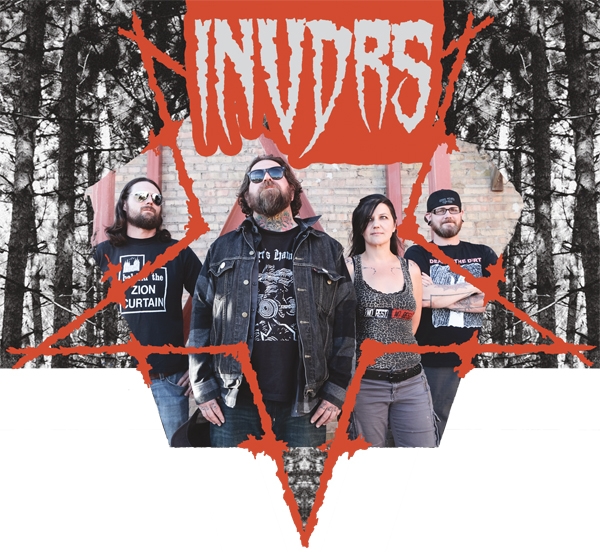 After a six-month hiatus, INVDRS, one of the region’s most remorseless rock acts, is back, and in fighting fettle. INVDRS is a four-piece doom band comprised of Phil White (vocals), Dave Moss (guitar), Julie Stutznegger (bass) and Gavin Hoffman (drums). For almost five years, the band labored to establish itself as the musical embodiment of primordial violence, a stated goal for which they offer no apologies. “We don’t hold back,” says Hoffman. Their album, Electric Church, and their live shows stand as the twin testaments of their gospel of redemption through destruction.

INVDRS began in 2007 when White moved to Salt Lake from southern Calif. Utah, he found, offered a smaller and more tightly knit counterculture. “People look out for one another here,” he says. This not only creates a feeling of real community, but also makes it much easier to get gigs. “In LA, you have to book shows months in advance, if you can get them at all,” he says,

For half a decade, INVDRS took full advantage of Utah’s optimal cultural conditions, but the need for a period of soul-searching lead White back to Calif. He says surfing brought him mental clarity. “Riding a wave is like being engulfed in a monster. Your thoughts can’t be anywhere else.” Such moments of lucidity brought White to recognize that he needed to return to Utah and INVDRS. “It’s still the same band,” he says, “but we’ve returned determined to be heavier than ever.”

Rather than calendar years, one way to chart the band’s development is in terms of its accumulation of amplifiers. Currently, Moss runs three 140-watt Sunn heads through six 4×12 cabinets. The setup is monumental, visually and sonically—one man’s own private Stonehenge, emitting the sound of tubas on fire. The most crucial component of INVDRS’ sound, however, is their writing process. A great deal of today’s gear-driven, heavy-riffing music feels, for better or worse, like hugely swollen blues. Or, it can seem hastily and arbitrarily cobbled together, quasi-structures of unrelated power chords—loud, yes, but formless and eminently forgettable.

INVDRS eschew both these pitfalls to achieve an effect, a scale which might be called geological. Their compositions come together slowly, over the course of long periods of rehearsing and reworking. Each band member contributes various ideas, which are first folded and melded together, then slowly eroded away until nothing remains but solid bedrock, absolutely necessary and utterly unyielding riffs. “They kill you again and again,” White says. To maintain this sound in live shows, it is crucial for the band to focus on tempo. Whereas many bands speed up onstage, INVDRS strive to slow everything down. According to Hoffman, this effort entails confronting two major obstacles. First, the energy of performing encourages acceleration, and, second, faster tempos hide various kinds of mistakes. “At slower tempos,” Hoffman says, “every bad note is fully apparent.”

INVDRS aim for the long duration not only with respect to their songs, but also the band as a social unit. The current members come from highly diverse musical backgrounds, which, in addition to punk, include indie and adult-contemporary.  INVDRS have created a powerful sense of cohesion within the band. The band’s newest member, Stutznegger, began as a committed INVDRS fan. “I came to shows to feel the power. It was a full-body experience,” she says. “Then, one day, they asked me to join.” Nor is it possible to miss how proud they are to work with their new bassist—all concur that she has written some of their heaviest riffs to date.

The band members are not hesitant to discuss their love of musical styles that scarcely resemble their own. White is a long-time fan of Otis Redding, while Moss enthuses over Norah Jones. The common thread connecting the various artists appears to be an innate sense of groove, a grail that INVDRS have themselves grasped and drank. INVDRS aim to diversify the shows they play in terms of genre. “We’d prefer to play shows with different sorts of bands,” Hoffman says, “not just metal.”

INVDRS recently gained greater notoriety when police interrupted a show at Brad Collins’ Raunch Records. Hoffman admits the band could be heard as far away as four Sugarhouse blocks, but still faults the officers. “They were being pricks, and they knew nothing about music. They kept asking me to turn off my drums.” Pricks or otherwise, the police put an end to their performance. Since then, all further shows at Raunch have been cancelled.

The band has no plans for full-time tours or conquering the media. “We have serious commitments here to work and families, but we’ll keep making music out of a biological need,” says Hoffman. “We’re lifers.” If anything prevents INVDRS from accomplishing more of their goals, it is an inconsistency of income. “If there’s not records or merchandise at shows, that’s why,” Hoffman says. The band nevertheless continues to write songs and hopes to record a new album in the coming months. This July, INVDRS will play Outsleazed Fest 2012, in Reno, Nev., and Doom & Gloom Fest on Friday, July 20 at Burt’s Tiki Lounge.