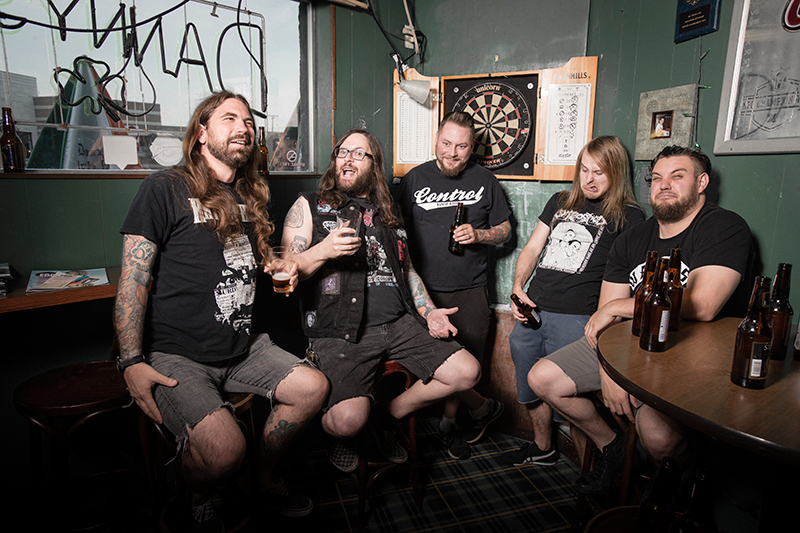 “I Could Feel the Magic in the Air”: Trevor Strnad of The Black Dahlia Murder...

The gentlemen of The Black Dahlia Murder began as heavy hitters in the New Wave of American Heavy Metal and have spent the last 15 years solidifying their place as a foundational death metal band. New generations of musicians are hitting the stage with The Black Dahlia Murder’s catalogue ringing in their ears. SLUG dropped a quick line to vocalist Trevor Strnad to talk about the band’s longevity, the release and reception of their seventh album, Abysmal, and the afterlife punishments for the rest of his band.

SLUG: Abysmal has been out about a month now—how are you guys feeling about the critical and fan reception?

The Black Dahlia Murder: We’re pretty pleased about things right now. The fans seem to really like it. I feel like there’s more excitement brewing about this one than our last, Everblack. The critics have been fairly kind as well. I don’t really put too much stake in reviews honestly, but it’s nice that they have been favorable.

SLUG: How have the live crowds been reacting to your new material?

TBDM: They seem to like the new stuff live. I think a lot of people out there are still catching up—it usually takes until almost the next album cycle before we really see people screaming all the words. Playing “Threat Level No. 3” is pretty insane—that’s by far the fastest and most challenging song of the evening.

SLUG: Do you have your songwriting ritual down to a science, or has each album had its own atmosphere and flow when you’re building it?

TBDM: The albums just come together slowly, piece by piece. There is never any pre-discussion or game plan as to what we’re going to write or how it will end up. It’s all left to what happens in the moment. As each song is completed, the album further assumes its identity—it’s actually a very exciting process for me. I am blown away each time we come back to write music. Brian [Eschbach] and Ryan [Knight] work really hard to always raise the bar for themselves. It’s always an exciting time when I get my hands on new music from them. I think Abysmal, overall, has a more melancholic feel than past albums, but at no point was such a plan discussed. That’s just how things happened to play out this time.

SLUG: When writing Abysmal, what were your hopes for the final product? Any specific goals or changes in mind?

TBDM: I think the biggest change on this record is a return to the raw production style of our first album, Unhallowed. It recaptures that energy and urgency that I think we’ve lacked on some of our more slick productions. Otherwise, we didn’t really have any specific goals other than to write a kick-ass record, but I could feel the magic in the air when this one was coming together. It’s a special moment in our history as a band. I think the band always strives to be catchy and brutal at the same time—to have strong choruses and memorability—it’s kind of our unwritten credo.

SLUG: At this point, you guys have basically been all around the world as touring musicians—what was it like transitioning to this jet-setting tour lifestyle?

TBDM: It was perfect for me. All I wanted to do as a kid was tour. I used to read Get In The Van and daydream about doing the same thing. I don’t know how that book lead me to want it so bad, since it was mostly about how touring is miserable, but it did. When I first met the band and tried out, I was adamant that we try to go all the way and become a touring band. It was my dream. It took a while to really get the hang of it. Once you can make a routine out of everything, it becomes easier to settle in and just live. I used to count the days till I got home, but I don’t anymore. You have to learn to live out here, just as you would anywhere else. I do feel like this whirlwind of travelling has made the last 10 years go by extremely fast. It seems like just the other day that we were young, baby-faced kids, and now we’re old grandpas farting dust.

SLUG: You guys have been around long enough now that you’ve probably been able to see some of the cycles that happen in music and entertainment in general. You said in a recent interview that your crowds are starting to look “half your age.” How has it been for you guys to transition from young-gun startups to a more mentor-like and foundational position? Has it changed how you approach your work?

TBDM: Yeah, we’ve definitely seen a few sounds and trends come and go. We’ve been very fortunate to survive as a band in these tumultuous times of the collapse of the music industry. Always reaching new people is a big part of our survival, I think. We have all ages come out to our shows, but the ones with the most energy are the young ones. I started to know we were getting old when opening bands would be star-struck to meet us and talk to us like we were old, battle-worn legends or something. It’s flattering, but it definitely ages you. I think we are wiser now than we were in our youth. We know a lot more about the business. We’ve also refined what we do musically a lot over the last few years. I think the adulthood of the band has seen us writing far more competent tuneage. I still don’t see an end to the possible growth of this band. As far as I see it, we’re always expanding our sound and growing. That’s part of the attraction to do it—to see what is possible.

SLUG: In your interview, you also mentioned some of the perks of reaching your level of success, particularly that you guys have more leeway when it comes to picking artists—and how some of the old designs on T-shirts make him cringe now. Again, with a transition to this success, how do you feel looking back on your old musical work in that same way? Do you feel like success has also enabled you to reach new heights in that regard?

TBDM: I do cringe at some of the earlier output—particularly my vocals and lyrics. Miasma has some stuff that could be a lot better from my end. I still really like Unhallowed: It’s raw and sloppy, but somewhat charming, I guess. I think the ideas were good, but we just weren’t quite tight enough as a band to execute them yet. It always sounds like we’re on the verge of a trainwreck. We’ve cleaned the songs up a lot over the years, and I still enjoy playing them live. I do feel like success is partially responsible for us becoming better at what we do. It drives you to want more, to strive for perfection.

SLUG: With so many bands dealing with drama (both reasonable and unreasonable), it’s always seemed like TBDM could not be having a better, goofier time. How do you guys maintain that positivity in such a frankly grueling career and industry?

TBDM: There have definitely been some dark times, but overall, I would say that we’ve had a blast. It’s been a one-in-a-million chance that we’ve been blessed with, so we have always felt a responsibility to take it to the extreme, to do every possible thing we can to forward the band. We’ve had a lot of different people [come] through the band, but they’ve always been friends first—that’s been a key for us. You have to have the right attitude for the job as well as the ability. I’m just thankful. We’ve had a lot of successes. I think it’s easy to smile when you have it as good as we do.

SLUG: Extra credit: Do you give the most interviews because you love it, or because you keep losing some crazy bet?

TBDM: I guess they think I’m the most outgoing one. When the rest of the members go to hell, they are going to have to do a LOT of interviews.

Don’t be a jabroni—get your ass to The Complex this Saturday, Oct. 17, and catch The Black Dahlia Murder performing with Iron Regan, Harm’s Way and Maruta.