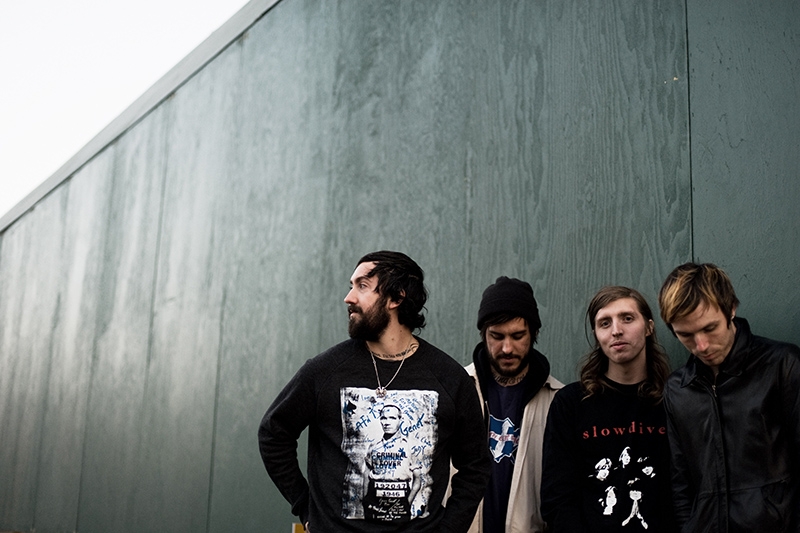 The Chords are Crushing, a Relapse to Nothing

On March 4, a band called Nothing released Guilty of Everything on Relapse Records. In passing, mention of the label renders associations with brutal extreme metal, but by and large, Nothing are a shoegaze band whose sole sonic metal credentials are, arguably, the sludgy characteristics of some of their riffs on Guilty of Everything. Other than that, frontman Dominic “Nicky” Palermo’s soft, whispery vocals float like clouds over celestially intoned guitar chord progressions and even-keeled beats. “I don’t think it fits at all,” says Palermo. He maintains, however, that, “it doesn’t matter these days.”

Whether it’s the characteristics of the sound or a record’s emotive feel, Relapse Vice President and Label Manager Rennie Jaffe suggests that the label’s strategy has consistently, “been about putting out records that are either dark or heavy—or both,” he says. “That can take many different shapes.” Presenting the diversity of Relapse will be their SXSW showcase on March 12 at the Dirty Dog Bar in Austin, Texas, which will include Pyrrhon, Primitive Man, Obliteration, Windhand, Christian Mistress and Nothing, who all (predicated by recent or upcoming releases) “represent the current roster of the label,” says Jaffe. Among acts who play death, doom, thrash, stoner and classic heavy metal, Nothing “prove the rule” of the stylistic qualities that constitute a Relapse band. Truly, Guilty of Everything initially seems out of left field for a Relapse release. Opener “Hymn To The Pillory” eases into the shoegaze malaise with a sparkly chord progression as Palermo begins his vocalic despondency—and then bursts into a musical Rorschach of the catharsis of guilt. This record hearkens to the airy singing of my bloody valentine’s Kevin Shields, but the instrumentation plays out less chunky and is more depressive. Guilty of Everything, even during its upbeat and poppy moments, such as with “Bent Nail,” effectively underlines the “bitter” more than the “sweet.” “Get Well,” for instance, clocks in at about 135 BPM with catchy, major-key hooks—yet the piece spirals to gloom as the lyrics read, “It’s easier to miss/On nights as dark as this/But the black clouds/Still follow us around/There’s gotta be a way/To escape from the rain/But I/Can’t find it.” That’s the whole song—the last two stanzas repeat to surmount the song’s pep with melancholy. Dark themes abound on this record—one of Jaffe’s Relapse-band criteria.

One factor that may have primordially qualified Nothing as a Relapse group could be Palermo’s history. He fronted the hardcore band Horror Show, who released The Holiday EP on Deathwish Inc. in 2004—a band that, Deathwish says on their site, dealt with their themes of violence in real life. Palermo surely did. He was incarcerated for a stabbing incident (from when he was about 18) in 2002, serving two years of a sentence that was originally slated for seven. That’s not to say that Nothing’s position on the Relapse roster is based on violence—in fact, Palermo founded Nothing to propagate peace. Since Palermo’s history roots in the subculture of punk and hardcore and, tangentially, metal, Nothing “come from our world,” Jaffe says. Palermo’s background in a Deathwish band undoubtedly seasoned him for the extra-musical expectations of a prominent underground label, and the strife he faced during his incarceration likely primed him for the “dark” attributes of Nothing that Relapse found attractive. Palermo says, “A lot of the [lyrics] that I used [were] written from the time when I was [incarcerated].”
Atonement is a chief motif in Guilty of Everything. “Beat Around The Bush” ensues with almost sludgy power chords that ride onto a rickety beat. The song’s “got a religious undertone to it, obviously,” Palermo says. A crash cymbal propels the song’s language to climax with “GOD IN MEN/OUR SOULS ARE SPENT/CAN’T BE SAVED/CAN’T REPENT,” transforming a previous mention of “A Thousand Faces In The Dark […] Across The Sea” from peaceful, possibly divine silhouettes on the Other Side to figures akin to criminals. Palermo addresses the theme of the album: “It’s not just speaking on my behalf. It’s almost like the record’s dedicated to human beings being what they are, and everyone is just guilty of being what we are,” he says. The title-track closer finds the speaker “Chasing Sundays” where “In Divinity there’s ecstasy,” but as the, “Stars are pleading/Will you catch us falling down?” he pushes away to say, “I’ve given up/But you shoot anyway/I’m guilty of/Everything/My hands are up/I’m on my knees/I don’t have a gun/You can search me please.” Given that Palermo wrote these lyrics while incarcerated for a violent crime, the image of an arrest and confession flip the switch on the typical, “heavy” violence found in much metal to reflect other emotions and dynamics affixed to that violence. “The record’s all about surrendering, in a way,” says Palermo. As a massacre in a film breeds remorse among the victims, Guilty of Everything humanizes suffering intrinsic in discord and redefines sadness as a palpable and “heavy” extension of carnage (2/2 for a Relapse album), and guilt operates as its contour.