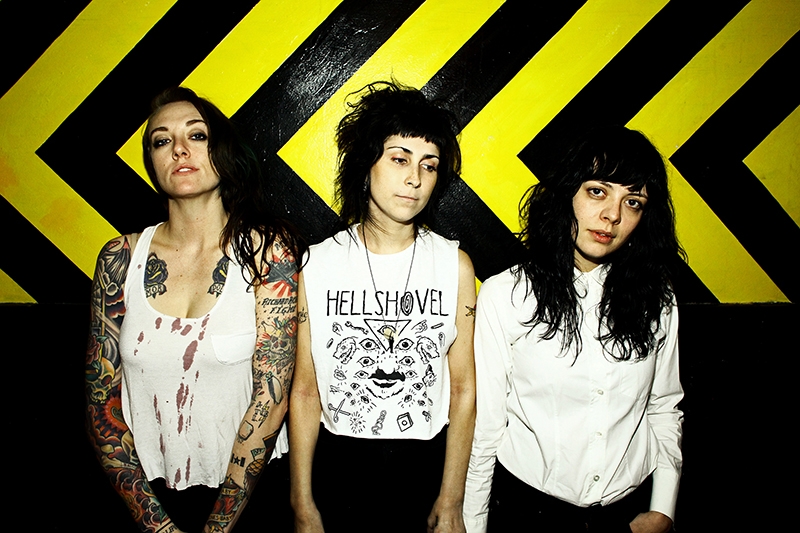 The Coathangers: Suck My Shirt!

“Sometimes I wish I could play drums way more technically better from a drummer’s standpoint, but I don’t think that would help me in The Coathangers. We have our own styles because we kind of just winged it—we just made it up,” says Rusty Coathanger (Stephanie Luke), drummer and vocalist for The Coathangers. “I think that’s what rock n’ roll is all about: It’s not necessarily conforming to this idea of rock n’ roll—it’s actually just who you are, presented in a musical fashion.”
This sentiment is spot-on what makes the Atlanta-based, post-punk, garage-tinged Coathangers so attractive. I came across them on accident at a SXSW Suicide Squeeze showcase a couple years ago, bouncing and yelping on a makeshift stage in a bar that looked like an Al Hirschfeld illustration come to life. Their no-shits-given attitude, paired with DIY style, infectious melodies and fun-poking lyrics led me to their merch table after the set, where I was presented with an armful of 7”s decorated in equally amiable art. I followed them around SX that year like a puppy looking for a best friend until I got an interview, which only proved further that these are the kind of people you wanna be friends with on the weekends.
The trio’s comprised of the fierce Rusty Coathanger, usually found behind the drums, whipping around her whatever-colored hair and singing in a voice that sounds like she’s been taking shots of Drano; Crook Kid Coathanger (Julia Kugel) picks up the guitar with simple but effective hooks, smoothing out the harshness of Rusty’s vocals with her own sugar-sweet melodies and perfectly placed yips à la Kathleen Hanna; Minnie Coathanger (Meredith Franco) rounds out the group, playing it super cool on the bass with a stage persona that screams “Rizzo”—but loveable. The day I was mistaken for a Coathangers band member while wearing their shirt was just about the best day of my life. This year, The Coathangers are dropping by SX for the “sixth or seventh” time, en route to an opening slot on the Black Lips tour, toting a brand new album released on their longtime label, Suicide Squeeze, on March 18. Suck My Shirt is everything you want from The Coathangers: poppy goodness that sticks in your ears like a broken Q-Tip with just enough punk to keep ’em dirty and wanting more—but it’s a lot more refined than their previous full-lengths. “That was kind of the goal on each album: to get tighter and tighter and better at what we’re doing. I think this album was a lot more straightforward as far as making it still us, but it’s still rock,” says Rusty. Even the title, Suck My Shirt, is reflective of their personality, stemming from some spilled tequila at a recording session.
Some of the tunes on the album will sound familiar—“Merry Go Round,” “Adderall,” “Smother” and “Derek’s Song” were all featured on 7” splits with Heavy Cream, Audacity, Davila 666 and Nü Sensae, respectively, featuring artwork by The Thermals’ Westin Glass. The format is a Suicide Squeeze favorite, and Rusty says that, along with vinyl being preferred by the band, splits give them a chance to work with friends. “Everyone’s out for themselves; everyone’s out to make that one hit song—people forget the point of making music … more important than this immediate ‘idea of success’ in the music industry,” says Rusty. “We’re all in this together—all the bands that we chose are just as hardworking and talented as we are … It’s about keeping the community going and supporting each other.”
The spirit of camaraderie has carried on into every creative outlet The Coathangers indulge in, including their music videos, which Rusty says have been made in collaboration with more friends. The videos are as eclectic as the band members, from the dark and weird to more gritty and lo-fi. “What you see is what you get in those videos … It’s just capturing a little moment in time and how we’re feeling,” says Rusty. “We try to be as creative as possible, and try not to be too corny.”
Their latest video for “Follow Me” is reflective of The Coathangers’ fun-loving sense of humor, featuring fellow Atlanta band Mastodon in … Well, just go look it up on YouTube. “It’s hilarious and it’s awesome … We’re always trying to reinvent the wheel, but basically, it goes back to friends helping us out and trying to keep that community alive,” says Rusty.
The band’s super stoked to set out on tour with the Black Lips, who are also part of the Atlanta music scene and were crucial in The Coathangers’ early days in the mid-aughts, helping them get on bills “we should not have been on at all,” says Rusty. “I think it’s gonna go together really well, a full-circle kind of idea …They are nuts, but in a good way—those motherfuckers go hard.”
Right back atcha, Coathangers. Pick up their new album (maybe they’ll have one of the 100 custom mint green records still available) at their show on March 31 at Urban Lounge, opening for the Black Lips, or pre-order it right now at suicidesqueeze.bigcartel.com. Oh yeah, and don’t forget to follow them around SX if you happen to be in Austin.