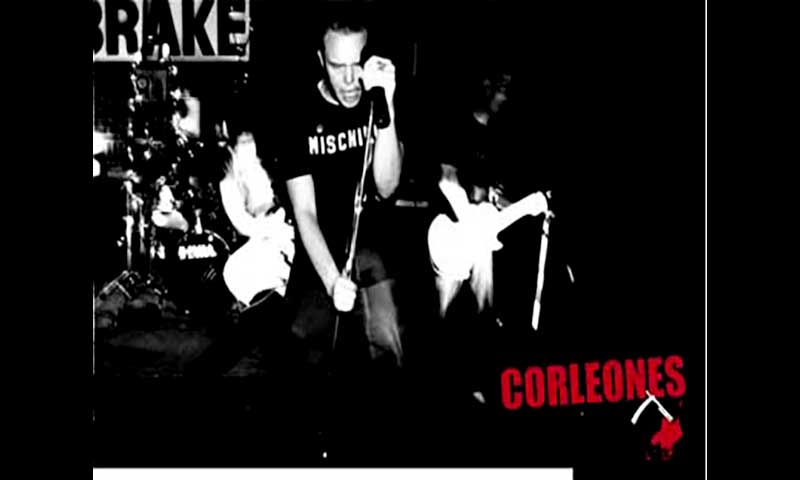 “The Corleones were too dangerous to exist. They played brash, harassing punk rock and paid tribute only to themselves, their cohorts in crime and their insatiable urge to piss off just about everyone. What’s so offensive about a dead naked girl? She was hot!” Nate Martin, “The Corleones,” SLUG’s Death by Salt I CD Compilation

The Corleones formed by accident in the late 90s, and continued on until about 2004, when they released a track on Death by Salt I just before their demise. Ryan Jensen, lead singer, says he was suckered into singing for a band for someone’s birthday party, and said band got such a good reception they kept going for a “bunch of years.” Six, actually.

“I never wanted to be in a band or make music,” says Ryan. “I thought music was a sham for people who didn’t have talent. Unfortunately, I found out they did have talent.”

The Corleones mixed uber-punk attitude with a nasty, dark, pop-punk approach high on venom, defiance and hooks, low on art. They incubated at their hangout, the Hellhouse on 33rd South, and possessed one of the shittiest reputations in town, having been kicked out of pretty much every bar in Salt Lake City. Ryan credits SLUG for helping put Corleones in the limelight. “Without SLUG, we wouldn’t have gone anywhere,” says Ryan. “SLUG took us seriously and gave us exposure.”

That didn’t keep them from having spectacles for shows, though. Once, with oft-showmates The Cronies, both bands got cut off after two songs, Corleones for making smart-ass remarks, Cronies for being “too loud,” whatever that means.

Inspired by Dave Payne’s skillful vocals and Wire (“who were more punk than the Ramones”), Ryan came to the conclusion that he could push boundaries and do “whatever he wanted” with his voice. Ryan kept wanting to put more art in The Corleones and approached them with Dark Wizard, what would be Vile Blue Shades‘ first release, but they wouldn’t have it. Exit Ryan.

“I didn’t want to have this reunion with the Corleones,” says Ryan. “I’m doing it because everyone else in the band wanted to.”

To commemorate this special occasion they will make public a secret full-length recording never intended for release titled, The Rise and Fall of Violent Rock N’ Roll.

Paul Burke, guitarist who helped raise hell with Ryan while they were running for office at SLCC (their campaign motto was “the only party with a keg”) is flying down from Portland to be part of the original Corleones lineup.

“Just sharing a stage with Clear and Iceburn is reason enough to come down,” says Paul. Paul’s first band, The Vomiting Cockroaches (later becoming Sprinklerhead) formed while he was in junior high, with Levi Lebo (The New Transit Direction, The Novelists) and Dan Whitesides (The New Transit Direction, The Used). They played numerous house parties, all broken up by cops.

Paul was also a member of The Downers and the Assassinators and Homesick, and still does Late Night Sleep TV in Portland. Dave McCall was a part of Politically Erect, The Grubs, Calvin Recliner, Bipolar Bears, Frankensystem, V vs. V, and is currently playing in an untitled project. Dave Coombs was in Homesick, Riddilin Kids, The Downers and is in The Pleasure Thieves. Ryan Jensen still continues swanky-strong with Vile Blue Shades. Sean has been on the DL since The Corleones.

This is the last show, reunion or otherwise, The Corleones will ever play.