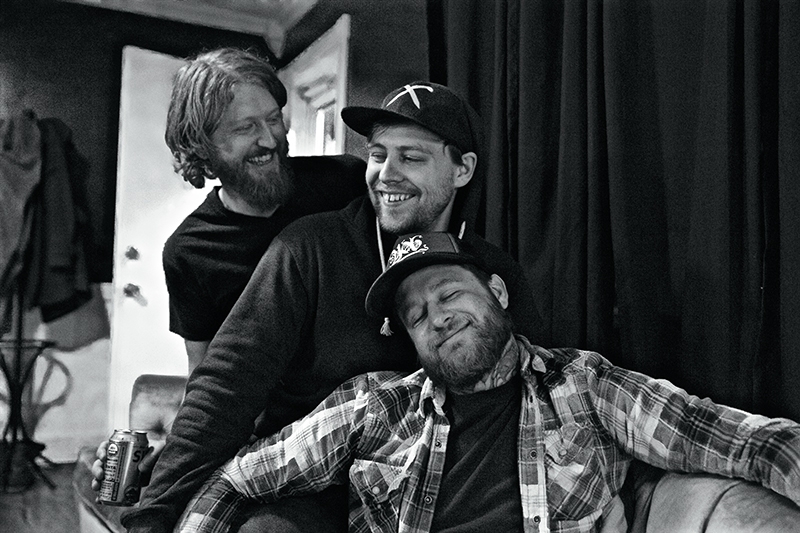 The Ditch & The Delta Make Their Crucialfest Debut

One of the lovely things about Salt Lake’s heavy scene is getting to see familiar faces in new and exciting projects, and there may be no better example of that than The Ditch & The Delta. Though they only formed a few months ago, and their members—guitarist/vocalist Elliot Secrist, bassist/vocalist Kory Quist and drummer Charles Bogus—have contributed to multiple beloved acts like Parallax, Making Fuck, Worst Friends and Maraloka. Now the trio has come together to form something new: dark sludge, heavy with melodic riffs and coarsened with Western-inspired accents. They’ve sharpened their barbed-wire sound live at a few shows already, and now they’re gearing up to hit the stage at Crucialfest 5 this June.

This act has a lot of familiarity to it, with the members having a long history growing up in Provo together and being a part of the scene, and Secrist and Bogus being bandmates in several bands. But there are some interesting firsts: This is the first time Secrist has played in a band that is “straight heavy metal” and done vocal duty, the first return of Bogus to the kit in almost a decade and the first time these three old friends have teamed up together on a project. There is an attractive mix of comfort and uniqueness for both the listener and these musicians, who benefit from years of trust and the ego-killing environment of a tight-knit three-piece act.

The band didn’t have any specific plan for their sound when they began the project, but built it through trial and error and instinct over the course of almost five months. “We didn’t plan any of it,” says Secrist. “The first few songs we had written were soft and really effect-heavy, and [had] like one repeated melodic soft part. But I would look around and we all looked kind of bored at practice.” Thus, they continued experimenting until they reached the band’s current sound. It throws a twist on typical sludge or doom bands by incorporating time changes, melodic riffs and song structures that are reminiscent of post-hardcore or another, more “technical” subgenre. These additions do nothing to soften the dirtiness of it all, but only seem to make it stick to your ribs all the more. All this is combined with the dual vocals of Secrist and Quist to create some sort of dusty desert hymn that really feels like it couldn’t have been inspired anywhere but Utah. Both Secrist and Bogus have flourished in their new roles. “It’s been cool to see Elliot’s vocal style develop, especially when we were in the studio,” says Bogus.

The Ditch & The Delta released their first EP, We Rust, this past February on cassette tape and digital download, and it’s available on Bandcamp. The cassette tape revival has been quieter than the vinyl movement, but is still attractive for many bands. For The Ditch & The Delta, releasing their EP on tape was a decision that was both pragmatic and romantic. “CDs don’t sell, really, but it’s nice to be able to make a product you can hold—an artifact, rather than just a download,” says Bogus. “This way, it’s a cool way to sell the download with an artifact. Putting out vinyl is awesome, but it takes so long and so much money.” Going straight digital would have been even cheaper, but the band refused to give up on the feeling of having a product to hold and put on one’s shelf. They released the album through Gypsyblood Records, owned by guitarist Stavros Giannopolis of The Atlas Moth, whom Quist met when he toured alongside them and SubRosa.

They are all veterans of the live show and have a few shows under their belts with this act, but as all musicians know, this doesn’t equal perfection, and the band is still constantly working with their gear and tones to achieve the thick brutality of their EP. “We literally did a back-to-back Friday and Saturday show, and it was probably one of our best shows followed by one of our absolute worst,” says Bogus. Nonetheless, the band is confident about their performance and is excited to be a part of Crucialfest 5 in this current incarnation. They are all longtime friends of Exigent Records owner Jarom Bischoff (Secrist is his bandmate in Worst Friends), and they feel like the fest is improving every year as experience grows. For show-goers who have not yet had the pleasure of seeing The Ditch & The Delta live, Secrist says to expect a “really heavy, oppressive” atmosphere—“the heaviness of doom, but with a mid-tempo.” Members are stoked on the enormous and awesome list of bands descending on Salt Lake for Crucialfest. “Cicadas always blows me away,” says Bogus.
Like so many talented people in this city, these dudes are busy. Secrist is “on call” for Worst Friends and God’s Revolver—both of whom are also playing at Crucialfest—and attending school for music; Quist is readying for an album release with Making Fuck, set to drop in October; and Bogus is working on a career as a tattoo artist, currently working at Ironclad Tattoo. Nonetheless, the group is planning a short Northwestern tour starting in late June and writing with the goal of a finished full-length in the near future. The Ditch & The Delta are scheduled to headline Friday, June 19 (Day Two) at Area 51 on the 21-plus stage at 4 p.m.
Photos: