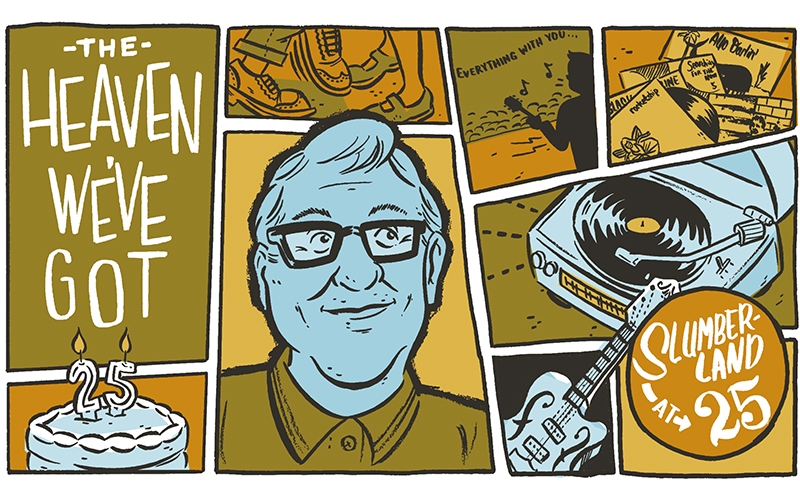 The Heaven We’ve Got: Slumberland at 25

Vinyl records and great tunes are a few of Mike Schulman’s favorite things. Slumberland Records (SLR), the label that Schulman and his friends started in 1989 around those things, has grown into one of the most beloved labels of the “pure, perfect pop” community. SLUG chatted with Schulman about indie pop culture, favorite records and running an independent label for 25 years.

Schulman cites C86 and record labels Postcard, Creation, Sarah, Flying Nun and K as touchstones that informed his sensibilities in the ‘80s when he was living in Maryland, not too far from the D.C. hardcore or the NYC noise scenes. “I went to see The [Jesus and] Mary Chain with one of my friends, and we started a band the next day,” he says. “They seemed to tie together all the things we liked—the pop and the noise. … Doing a single seemed like a logical next step to document these weird, primitive bands that we had.” His band, fuzz-pop pioneers Black Tambourine and his friends Velocity Girl and Powderburns made a 7”, What Kind Of Heaven Do You Want?, which was Slumberland’s first release.

“At the beginning, it was more of a collective thing,” Schulman says, “but the other folks who helped with it were all in Velocity Girl.” When he moved away to the Bay Area in the early ‘90s, Schulman was unsure of what the label would become. Since then, he’s exclusively managed all aspects of Slumberland, from signing bands to filling out mail orders for their records.

At over 200 releases, the SLR catalog is impressively diverse, from the pure, shambling guitar pop of early Velocity Girl, to the earnest strum of The Softies, to swirling shoegaze of bands like Lilys or the energetic noise-pop of Henry’s Dress. The 1994 compilation Why Popstars Can’t Dance showcased the full range of the exploding scene.

“The Henry’s Dress records were really exciting—that was a band that really blew my mind at the time,” Schulman says. “I still feel like those records are some of the best records that I’ve ever put out. The Lilys’ [first] record … felt like a quantum leap from what we were doing before.” SLR released records from legendary bands Rocketship, Go Sailor, HoneyBunch, Boyracer, The Aislers Set, Stereolab, Swirlies and Lorelei, among others.

As bands broke up, moved on to bigger labels or settled down, by the late ‘90s, the label had entered its own slumber, with fewer releases and an eventual hiatus throughout most of the early ‘00s. “I didn’t really have much in the way of bands,” Schulman says. “I didn’t want to put out records for the sake of putting out records.” Though there were a few releases trickling out in that period, Schulman’s focus shifted to Drop Beat Records, another label he started, which specialized in electronic dance music.

After coming back to the scene in the mid ‘00s with more releases, SLR released the debut album of Brooklyn-based band, The Pains of Being Pure at Heart, which introduced indie pop to a new generation of bedroom dreamers and to the burgeoning culture of online music journalism. “I took a month off from work for paternity, and the record was just starting to blow up,” Schulman says. “I would get up in the morning and look at my email and I’d be like, ‘Oh my god, I’ve got 40 orders for the new Pains record overnight … When am I gonna fill these?’”

Though SLR and its catalog have been at the core of indie pop culture since 1989, the term is often misunderstood and abused by critics. “Being around this long has its pluses,” says Schulman, “because the records might get a certain amount of attention paid to them, but it also has its minuses in a way, because there are preconceptions that people have that are extremely hard to shake.”

Indie pop is a highly aestheticized subculture and music genre. SLR puts out great indie pop records and fosters the culture, but that’s not all they do, and the tendency to lump every band in that category is one of lazy habit. “I think there’s a thread in that I value songwriting and I value noise. … I like when they’re put together,” Schulman says. “There’s very little, aesthetically, that binds Weekend together with The Softies. There’s not much commonality there, other than I like them both.”

Despite the stereotype of being cloying and overly shy, a fundamental quality of early indie pop bands was an explicit attention to politics—especially feminism. “There’s still something about the ethics of indie pop that are important and not appreciated by the mainstream indie machine,” Schulman explains. “Twee,” a pejorative that’s been reclaimed by many, often glosses over anything that musicians are actually trying to discuss. Running a label by oneself, like Schulman does, or being in a band that operates outside of a “music industry,” is still a radical posture that defies easy labeling and is still necessary today.

At 25, Slumberland Records is a beacon of DIY pop culture, and Mike Schulman makes it look ridiculously easy. Check out the Mixcloud player below for a SLUG-curated Slumberland playlist, with a more detailed history of Slumberland’s catalog.

The Heaven We’ve Got: Slumberland at 25 by Slumberlandrecords on Mixcloud