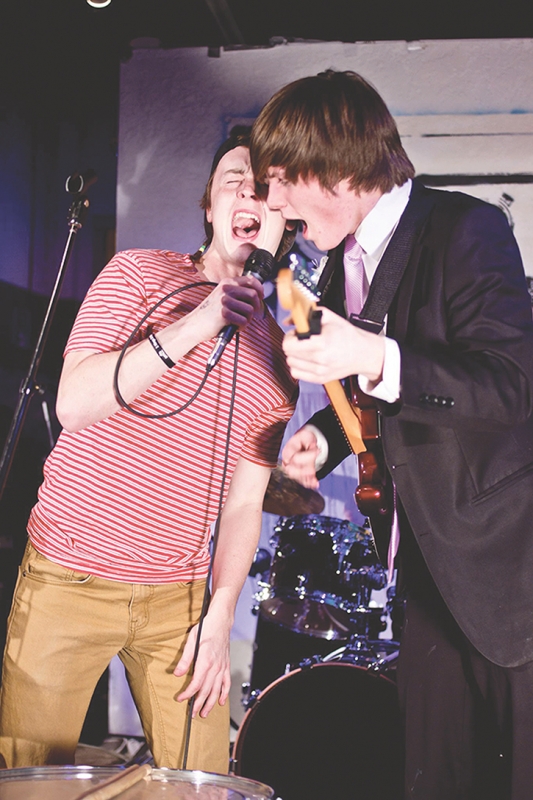 The Kids Are All Right: The 801 Sessions

When you play in a band, you can always anticipate that there are going to be challenges in your creative venture—fighting with your bandmates, finding a good place to play, playing something that is worth listening to and the always-tricky-to-acquire quality recording and footage of your band playing live. YouTube is riddled with shaky, muffled videos of shows that may as well have been filmed from the inside of a blender. They never do the band justice, and are rarely worthy of showing anyone other than your girlfriend. Imagine, for a moment, that you can play at a quality venue, get paid decently for your time, and then jump online to share your immaculately mixed, well-filmed show with your fans. Such a thing exists, friends, and can be found in our fair city of Salt Lake. The only catch is that you have to be under 21 to play—the rest of us get to watch.

801 Sessions is an entirely youth-run music production company, formerly known as Spy Hop Records. 801 Sessions consists of a group of students attending Spy Hop Productions—a nonprofit youth media organization who puts on their own shows every third Wednesday at The Shred Shed. The students find the bands, do all of the promotion, run the sound, the cameras and the lights, and then edit and mix the live footage into one well-composed video that they share online.

Jeremy Chatelain, Musical Arts Instructor at Spy Hop, spent a number of years playing in bands and recording music. He wanted to create a program that empowered youth to create their own scene. “I wanted to give the students with the technical skills and the desire the opportunity to have a real hands-on experience in the local music scene as contributors and artists,” Chatelain says. 801 Sessions started as Spy Hop Records, but needed a new strategy and approach. They weren’t trying to function as a record label, so Chatelain and his students tweaked the program, and 801 Sessions was born, with their first show in December kicking off monthly shows rolling out at The Shred Shed featuring local bands under 21.

I don’t think I do the 801 crew justice by calling them students, because they run the show. Sure, they are learning as they go, but most of the participants have been a part of Spy Hop for a while and have gone through internship programs in areas like sound production and film techniques. They bring high-caliber skills to the table, and are able to implement them in a professional environment—building relationships, learning from mistakes and ensuring that another generation in our fair city will continue to embrace good music. “We are getting involved with real people,” George Metos, 18, says of the experience. “We get the highest-quality product while learning to work with a lot of people all at once.”

When I joined the group at Spy Hop, it was immediately clear that these guys have a great deal of pride and confidence in their craft. They expertly articulated their technical jargon as I asked them questions. I felt like I could keep up with about half of what they had to say—I studied film in college and have played music for a while now, but these guys have clearly taken the time to develop a close relationship with the resources at their disposal. The team agreed that at times, organizing the 801 Sessions feels like a full-time job.

The group has grown close over the course of taking on all aspects of running and recording a live show. Each individual has a key responsibility in making the entire package come together—whether they are hanging lights or promoting, they work well together. “Spy Hop kids have an unspoken bond,” says Daela Tipton, 17, of the group and how they execute the shows.

Rylee Krizman, 16, says, “I play in a band, and through all of this, I have gotten to make connections that I can use to grow and learn,” referring to different community partnerships they’ve made, such as with Jesse Cassar from The Shred Shed. Cassar has been helping the group to better understand how to work with venues and to make sure that their bands are adequately paid.

When you track down some of the videos that the group has produced on facebook.com/801Sessions, or listen to their tracks at 801sessions.bandcamp.com, you will see that the production value is fantastic. The bands are talented as well—Mad Max & the Wild Ones headed up the May show, and other groups like In Transit and The Pelicant’s have also played great sets. And, as I mentioned before, they always get paid.

Typically, the 801 Sessions shows are every third Wednesday at The Shred Shed, around 6:30 p.m., for $6. The next show is July 16, and the next season starts up Aug. 26. I urge you to go, because I have a feeling that these guys will be around for a while—you may just catch a glimpse of the future.