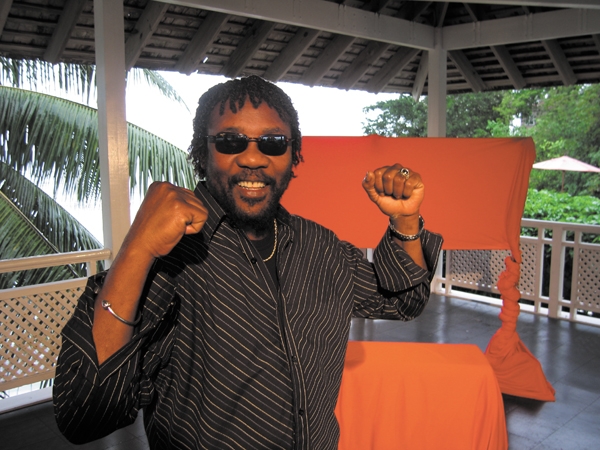 The Man Who Put the R in Music: A Conversation with Toots

While most everyone was mourning the loss of the King of Pop, I was preparing myself to interview reggae legend Frederick “Toots” Hibbert of The Maytals. When I emailed my good fortune to a few friends, they all sent back the same question— “Who’s that?” I wondered how I could possibly call such clueless people my friends. I played them a few classic Toots tracks, “Pressure Drop,” “Monkey Man,” “Sweet & Dandy,” and the results were simply embarrassing! Shit, they didn’t even recognize “Pressure Drop.” People, you HAVE to know at least that track.

It was the day after MJ’s television takeover tribute when I called Toots. He answered from his hotel room in Amagansett, NY, and I immediately noticed his thick Jamaican accent. “I’m a very, very busy man,“ he said politely, “I have only five minutes.” Luckily, I was able to get a few more minutes out of him. Toots’ role in Jamaica’s music scene is monumental. He has been around since the early 60s and since then has been involved with many of the key transitions, ranging from ska to rocksteady to reggae. It’s this musical blend that makes Toots & the Maytals sound unique.

Toots’ career began when he heard soul artists on the radio. “Radio in Jamaica played these great songs y’know, like James Brown, Otis Redding, Ray Charles and Sam Cooke.” He says, “In Jamaica you have ska music, which was originated by the The Skatalites, and I was there singing ska music with the Maytals then the rocksteady sound come in, and then the reggae come in.” Ska is all about high energy, but it was these American soul artists with their slow tempos that really influenced the way Jamaicans played music. In the mid 60s, Jamaicans slowed things down and that’s what became known as rocksteady.

Reggae followed soon after in the late 60s, Toots makes it very clear that he is the reason why we call reggae what it is today. “I was the one who put the R in music, most people know that,” he says. It was his 1968 single “Do the Reggae” that coined the term. “We were sittin’ there, me and my two friends playin’ my guitar and the word reggae comes up. Nothing planned, y‘know. I just simply said, lets do the reggae. Just a few words y‘know and that‘s it.” He says, “Reggae always be positive and sentimental, that’s why I sing reggae and late great Bob Marley, Jimmy Cliff sing reggae. So much music coming from the same place—Kingston, Jamaica, y‘know. It’s all different music, people try to compare it to reggae, but nothing comparable to reggae.”

At this point in our conversation I could hear the horn of a car calling for the busy man. Somehow, I managed to get him to hang on the phone with me a while longer.

In 1972 The Harder They Come was released. It was the first feature film to come out of Jamaica and it introduced the world to reggae music. It also made The Maytals a household name. “Those days I was called The Maytals, nobody knowed that they called me Toots. Toots is my nickname.” The nickname was given to him by his brother when he was a baby, “In those days, I was the number one artist in Jamaica, so they want the number one group to go on the film, they use my songs ‘Pressure Drop’ and ‘Sweet & Dandy’, and my intelligence to help make the movie strong and make it good, y’know?”

“Pressure Drop” is just one of the many great songs Toots has recorded. This song, in addition to his countless other early tracks, influenced many British bands during the late 70s including The Clash and The Specials. More recently bands like Reel Big Fish, Big D and the Kids Table, Amy Winehouse, No Doubt, 311 and Sublime have all taken turns covering classic Maytals songs. When Toots first heard the covers he says he was shocked, but pleased. “I was feeling good to know that I write songs that people want to sing, y’know? My words are good, everything is good.”

Toots is a legend. He has made music and performed for well over three decades. This summer Toots embarked on a tour that took him across the United States. On August 13 Toots and the Maytals will perform for free at the Gallivan Center as part of the Twilight concert series. What can be expected from the performance? “I make very special performance for my audience so they have something to remember years to come. I always have the younger generations coming to my shows and they keep love in me, y‘know, and I keep love in them.”