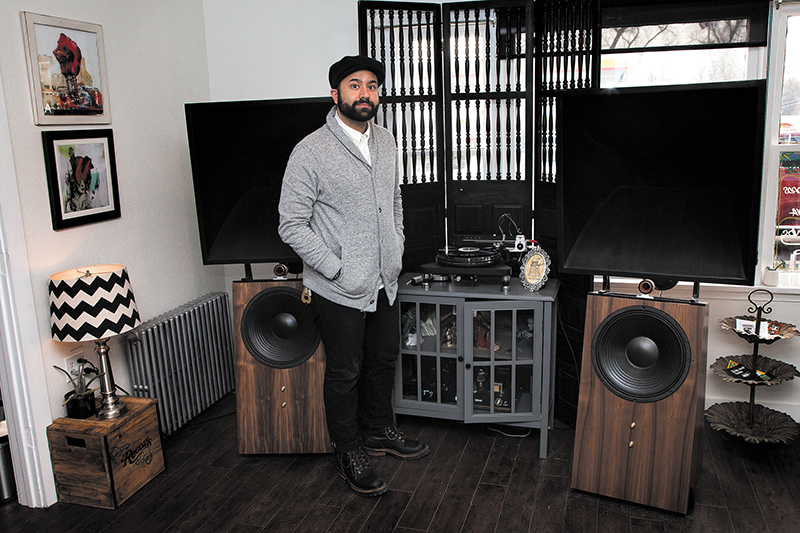 Timo Hatziathanasiou has made Albatross home at the cusp of Downtown and Sugar House.
Photo: Jessica Bundy

Tucked in on the corner of 1300 S. and 900 E., Albatross Recordings & Ephemera announces itself in a mid-Century style font across the glass door of its brand-new location. Inside, the shop’s owner and sole collector, Timo Hatziathanasiou (who’s also a SLUG contributing writer) can likely be found listening to one of his many idiosyncratic records and casually chatting with local patrons. “I’ve been excited to see the reactions people are having to the new place,” says Hatziathanasiou. “I’m happy with how it’s turned out so far.”

The new spot marks the third—and likely permanent—transition for Albatross after a six-month stint with Diabolical Records in 2014 and a 14-month stay at the recently departed 9th and 9th building. Now, as Hatziathanasiou settles in at the cusp of Downtown, Sugarhouse and South Salt Lake, he’s optimistic at the chance to interact more with the creative community.

In only a few short years, Hatziathanasiou has earned a local reputation (such as “Best Eccentric Nostalgia” by City Weekly) for his assemblage of offbeat recordings and strange but alluring pieces of art. “People have described the selections as more niche, but I don’t really know how to describe it,” says Hatziathanasiou. “I think that the initial idea for starting this was just [my] wanting to be surrounded by all the things I like in one place … If I were to go into a store, what would I want to see?”

Though stated fairly simply, the result of Hatziathanasiou’s intuition has created a kaleidoscope of artistic commodities that wouldn’t likely be sold together in another shop.  In part, this could have something to do with his growing up in a diverse musical background among family and friends. “I got into it pretty early,” he says. “My uncle owned [Sound Off Records] at one point, so I was around them and … in my dad’s case, it was Greek rebetika; in my mom’s case, it was jazz fusion … and my older cousins were all over with early ‘90s alt-rock or whatever else they had sitting around. If I was over at a friend’s house, I would usually pick something up [from them] and listen to it later.”

Though Hatziathanasiou has been on the lookout for new piques of interest for most of his life, his personal library shrunk significantly after moving to Queens, New York, for school in 2003, and he had sold most of his collection before his return to Salt Lake City in 2010. When he decided to start up Albatross a few years later, he had to start a new collection almost entirely from scratch. “It was kind of cool starting again … [however,] it’s frustrating to see how some things that had been easier to find or affordable are pretty much out of range for a lot of people nowadays. For example, when I was back East, I was able to get Prince’s Sign o’ the Times on the sidewalk.”

Despite recent changes in the market, the rising interest in analog music reception has proven to be a positive movement for Hatziathanasiou as more people share his preference for vinyl. Though he believes that personal listening styles are completely subjective, his personal love for the medium is rooted in the form’s physicality. “There’s a tactile quality to vinyl: The larger jacket, it’s like opening a present every time. It’s something you can hold and feel and touch,” he says. “Just working with the machines is a pleasant experience. It can be tedious to dial something in. It takes a little patience to get everything in the right place, but once it’s done, it’s worth it.”

In the new location, you can hear this conviction for yourself as Hatziathanasiou’s impressive setup sends waves across the store. Now that all of the materials are on the same level, as opposed to the 9th and 9th location arrangement, patrons are free to ask questions directly about music suggestions, new material or just shoot the shit while they’re browsing. The goal of Albatross is both to offer a comfortable space and to encourage any music listener’s desire for finding new treasures. “The back room is all the $5 and under, and that seems to lead to the most discovery,” says Hatziathanasiou. “A lot of the time, there’s more excitement when you come across something that you didn’t know you were looking for.”

If this is the kind of experience you are seeking, then Albatross offers plenty of opportunities. Though music is the main focus of the shop, Hatziathanasiou also holds ephemera such as books, zines, pins, figurines, paintings and other collectibles that reflect the personality of their finder. Oftentimes, these are pieces that are purchased directly from the artists themselves, and Albatross can be a great way for locals to become involved as well. “I’m always open to people bringing their stuff in,” he says. “I’ve got some good art from those who relate to the store in some way and decide to bring their own works in.”

In spirit, Albatross models itself similarly to other community-centered businesses that thrive in environments where people participate and share interests with one another. If you’re in the area or just want a break from the digital music world, stop by and visit. You’ll surely find something you never knew existed.