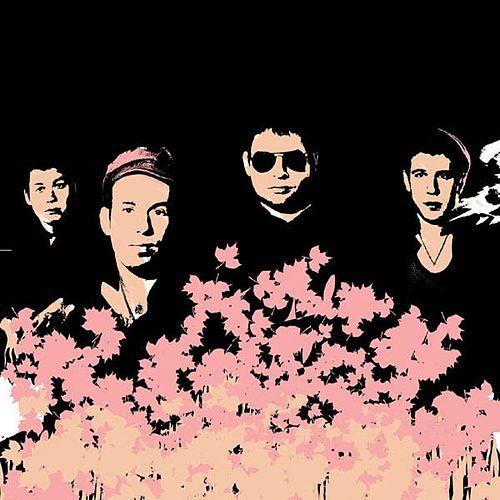 The Plot To Blow Up The Eiffel Tower

[Plot to Blow Up the Eiffel Tower, cartoon-style]”I just remember getting to the Lo Fi Café and seeing a lot of tough dudes around and two boring tough dude bands playing and then getting on and doing what we usually do, which is spazz out and throw spit around. [Lead singer] Brandon [Welchez] provokes the crowd, usually in a sexy, weird, gross but awesome way. Some of those guys didn’t take too well to it. We finished the set and I packed up my guitar and Brandon came up to me real close and said, ‘We’re gonna die. Do you have my back?’ I said ‘Yeah, of course.’ And then right as we got off stage four or five guys came over and got in Brandon’s face and backed him into a corner.”

This was an account given to me by guitarist Chuck Rowell of the first show The Plot to Blow Up the Eiffel Tower ever played in Salt Lake. I was at the show, it was great. Four scrawny art school kids from San Diego taunting, sneering and spitting at a crowd comprised mostly of thuggish, burly hardcore kids there to see the opening act and playing tunes from their debut full-length, Dissertation, Honey (2004), the album to which they account for the words “jazz punk” emblazoned on their bony, white asses. Their second LP, Love in the Fascist Brothel, comes out this month on Three.One.G/Revelation. It might not be what you’ve been expecting.

Dissertation was like nothing you’d heard (except for the maybe The Minutemen…kind of,l ike I said, nothing you’d heard). It was fast, snotty punk that wrapped its grimy little fingers around free jazz saxophone sounds and untimely scales. “It was easy for us, when we did that first album, to replicate jazz,” says Chuck. “In free jazz, there’s a huge gray area, you’re either super good or you’re super terrible. And if you’re super terrible it kind of sounds like you’re super good because there’s no professionalism. It’s just what you’re feeling. So it’s easy for us to be skronking away and not making any sense.”

Things change, though, and people get tired of the old ways. You won’t find any jazz on Brothel, and credit is largely due to cuntface music critics like myself. “We were totally pigeonholed,” Chuck told me. “Every interview was like, ‘Jazz punk. Jazz punk. Hardcore with…jazz!’ We couldn’t be like that forever. We don’t want to. We wanted to move into other darker areas that some of our other favorite bands have been into like Bahaus or Birthday Party or Pit Boys.

“I think a majority of writers don’t have an original idea. Rather than developing the real reason they like the band, they just hear someone say, ‘Hey, check out this band. It’s a jazz punk band. Punk and jazz. Check it out.’ It’s the accepted term ‘This is jazz punk. This is what it is.’ There is absolutely no jazz on the new album. There’s a saxophone that sounds really weird and it leads the songs sometimes, but no jazz. I still see it in the CD reviews we’ve gotten for the new album, though.”

I asked Chuck if Brothel was a big Fuck You to those guilty of christening them the American jazz punk all-star band. “That’s exactly what it is. The whole thing about the whole album was supposed to be a, ‘Take a look at how the punk scene is and take a look at how the political climate is.’ It was supposed to be shocking and a complete departure from anything we’ve done. We were on the road six months out of last year and we played lots of shows where we would go balls-out and, whether we were wearing Nazi uniforms or not, kids would run for the hills. They would back up and get offended and then we’d hear about it in emails, on message boards- ‘You can’t do this,’ ‘You can’t do that,’ ‘Why do they do that?’ ‘Fuck them.’ This album is a backlash. And I think it’s because people saw us completely different with Dissertation, they saw smiley guys who wanted to meld jazz and punk and be cool and jam. It’s not that way anymore.” “The tough dudes were yelling at Brandon to go outside and saying how they were going to kill him and Brandon was kind of being witty but ultimately scared shitless. Then one of them swung and hit our drummer Brian in the face and he fell down and covered his head. A fight broke out that had nothing to do with our argument, which was really weird. It was just a lot of people in one little area up by the merch tables. Luckily [Lo Fi manager] Jimmy [the Tooth] and some of the bouncers broke it up and divided everybody and we had to sit behind the merch tables for the rest of the night.”

True originality only comes from living naked in an empty box with no windows. Only then are you free from the outside influences you unconsciously imitate. Fortunately, something resembling true originality appears when one views the ways of the present world as stagnant, dishonest and naíve. People become angry. People want something new. People scream until they’re heard. This is the sort of thing that happened in the late seventies when punk rock’s first absurd buds began to blossom, it was a complete departure from anything (for all intents and purposes) that had been done before. This sort of thing is happening now.

Chuck and I spoke of this, and he stressed that those goddamned kids these days have points of reference too close to the present (“A lot of kids are holding up a band like Orchid like it’s their Sex Pistols“). I said it’s better to have no point of reference and fuck imitation and idol worship, and a bunch of other pretentious, stupid shit like I always say, and he said, “I do understand that but I think that kids not knowing that there were these other bands around that had that same spit and vigor is a bummer. Bands, when they start, should set out to destroy everything that came before and ignore it. But with three decades [of punk music], you can’t ignore it. And you should definitely know about it and listen to it. Crass did stuff that has still never been done or outdone. Kids should see and understand that and listen to it more because they had a lot of great things to say and they did a lot of crazy things with their music, not even just what Steve Ignorant was ranting on about.

“The problem with punk and hardcore these days is that it’s just bands repeating the same album over and over, and every review is like, ‘Great hardcore! Great hardcore! Once again, another great hardcore record!’ Bands aren’t treating every album as a cornerstone in the lineage of their band. They’re treating it like, ‘Dude, let’s go in and record some more tracks. We’ve been writing the same song now for like, five years.’ But kids like it. Kids like when bands scream and have their breakdowns and then there’s the quiet parts and then they get loud again. I just think that ninety-five percent of the bands in the punk and hardcore scene just repeat the same album over and over. Unfortunately the kids are ok with it and it just keeps going on and on. Someone develops a sound and it gets repeated and you get down to the lowest common denominator and that’s all anyone wants to do is play that same sound over and over and over.”

“The show kind of went the way we wanted it to go. We want to provoke people. We don’t want to get hurt, but there’s an achievement in provoking somebody so much that they can’t just lay back and laugh at us for being as silly as we act sometimes. At the time of it, though, we were scared. It’s a bummer that we could’ve all gotten beat up or our van destroyed or something, but at the same time that was crazy- it was awesome! We totally escaped this fucked up situation and provoked them the way we wanted to. We provoked the right people because they’re the people we don’t even want to like us. It’s the same way when our tires get slashed or when we get shit thrown at us. We give the crowd what they give us. Most of our west coast shows are love-fests. Kids are onstage dancing and singing along. We don’t say, ‘Fuck you we hate your city.’ We embrace that. Clothes get taken off and fun happens. But when we play and there’s a negative reaction or there’s no reaction, rather than going about it as if nothing happened we’re going to make something out of it.”

Love in the Fascist Brothel is in stores this month. It includes the track “SLC Hunks.” xoxoxoxox