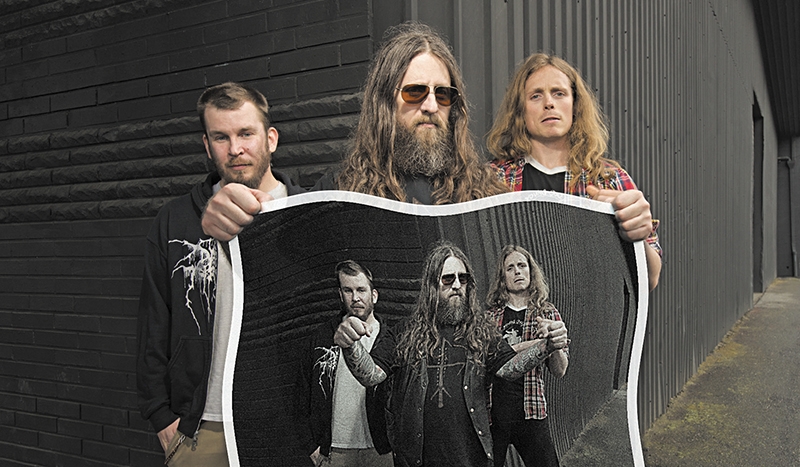 The Quest for Water: A Conversation with YOB’s Mike Scheidt

Seven records into their career, YOB are becoming elder statesmen in the republic of doom. Their stature derives from their output of consistently wrought-iron albums, but also from discernable wisdom and humility. Frontman Mike Scheidt insists on his determination to remain a constant learner. Scheidt spoke to SLUG about numerous influences and sources of inspiration, but when making YOB’s latest, Clearing the Path to Ascend, “I stopped listening to music for a while,” he says, “until I had the vibe of the new music dialed in.”

The band had few preconceptions when creating Clearing. Scheidt says, “Our goals were simple: complete inspiration in the new music, and brilliant sound production. We’re happy with it.” While YOB’s previous release, Atma, brought down hammering riffs, the album was unique in the YOB catalogue. In quest of authenticity and immediacy, production was kept minimal. The album brought YOB within range of the dry and airless sound of post-Damaged Black Flag. By contrast, Clearing brings a wider array of textures and a broad dynamic range. “Parts of our new album are indeed pretty dense,” Scheidt says about the second track, “Nothing to Win,” “but other moments are as wide open as we’ve ever been.

“My goal is to have each album have its own feel,” he continues, “but also [to evolve naturally] and [stay] true to our sound.” Such organicism does not arise without effort. “YOB definitely jams out,” Scheidt says, “but that’s just goofing around. Writing actual songs requires a lot of concentrated time at home.” Eventually, Scheidt presents his elaborated compositions to the rest of the band. “For this album, there were lots of potential songs on the chopping block, and the four that survived were those that resonated most powerfully with all of us,” he says.

The novelty of Clearing is most apparent in its two concluding tracks, which introduce occasional keyboards and evoke the moodier moments of Emerson, Lake & Palmer’s Trilogy. “The more dynamics, the better, provided the song calls for it,” says Scheidt. This expanded reach owes much to Scheidt’s foray into solo acoustic performance. “My roots as a musician are all over the place. For eight years, I worked in a high-end guitar shop. Our specialty was vintage, collector’s-grade acoustic and electric instruments. I was exposed to folk, country, swing and country blues.”

“I don’t think a song like ‘Marrow’ could have emerged without my acoustic meanderings,” says Scheidt, although he says that he never considered performing solo until after two transformative events: “I got my first Townes Van Zandt album, and it blew my mind how powerful the music was,” he says. The second event was seeing Scott Kelly opening solo for Sleep. “I had spent years working on finger-picking and country blues, but I never thought about going solo until then.” While the spirit may be willing, the flesh is often all too human. “Musically, it is the hardest thing I do, playing solo,” he says, “but watching footage of Michael Gira, Daniel Higgs and Kelly continually motivates me, and the discipline of performing solo has made me a better musician.”

Side projects such as VHÖL and Lumbar, meanwhile, have proved rather liberating. Scheidt says, “In both, I have a lot of freedom with my vocals.” Scheidt’s vocals—which range from uncanny alien whine to bellowing ogre—are perhaps the most distinctive and captivating aspect of the YOB sound.

“I love a lot of styles of singing—more colors of paint,” he says. For a doom band, YOB display a vast range of feeling. “I experience every emotion in life, but I try to focus on the positive. In music, I work through life’s ugliness in a constructive way. If all I brought were rage, I’d be just another burning tree in the forest fire. I also want to bring water.”

While Scheidt claims to have used “just about every amp you see in doom,” after years of experimenting, he has whittled down his gear to six basic components— “Every piece is highly specialized to YOB,” he says. Scheidt admits he loves killer tone, though he insists that tone alone is hardly sufficient. “With tone, a live band can skate by on so-so riffs, but that won’t carry an album,” he says. “My stage setup can give a false sense of awesomeness, so I write every YOB song in my bedroom on a $50, piece-of-shit amp. If it sounds good on a 6-inch speaker, it will sound good on my full rig.”

Scheidt is an avid reader and travels with multiple volumes in his backpack. “I thought about getting a Kindle,” he says, “but I like actual books. Tablets aren’t sexy.” Books offer Scheidt far more than mere diversion. “Reading has everything to do with what I write,” he says. Scheidt’s literary tastes are as diverse as his musical interests, but Alan Watts has proved a crucial source of inspiration. “He can express esoteric concepts in a way that allows an average person to feel as if they had understood his ideas all along,” says Scheidt. One of the few predetermined elements of Clearing was the use of key excerpts from Watts’ lectures. “His choice of words and the energy behind them, definitely anchored me and helped the new album emerge,” says Scheidt.

YOB has graciously played some intimate, yet engrossing shows in Salt Lake. My suspicion, however, is that those nights of sparse attendance are forever gone, but you can find out firsthand. YOB will appear in support of their new album with Enslaved, Ecstatic Vision and SubRosa at Bar Deluxe on March 13.