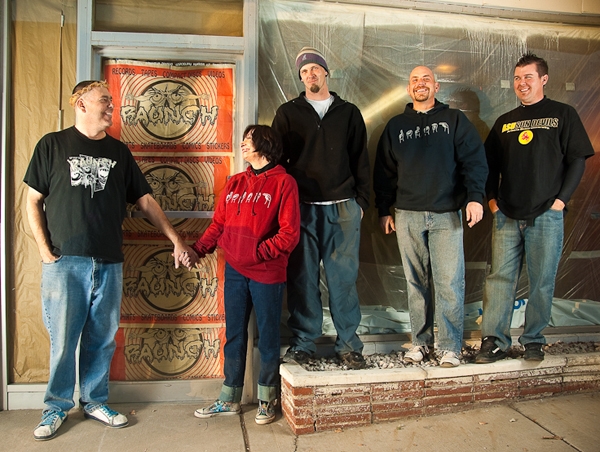 The Rebirth of Raunch Records

History is always prone to repeat itself.  Within a closely-knit subculture such as the one we participate and perpetuate in this City of Salt, certain shared ideas continue to linger over the years, whether they deal with art, music or politics. Some of these ideas are passed down from generation to generation, reignited with an interest of the origins or history of all things cool—or all things opposite of the local conservatism. Some of these ideas disappear into obscurity, only to be triggered by a reminiscent conversation of the early days of the Utah underground scene, or perhaps even déjà vu.

Depending on your age or the amount of time you’ve spent in this town, chances are you’ve, at the very least, heard the name Raunch, or seen the logo on a t-shirt or hoodie.  Graced with the skull-heavy commissioned art of world-renowned skateboard artist/Septic Death vocalist Pushead, these iconic images will always be synonymous with many local punk and counter culture endeavors of the past 25 years.  For the older locals who set out to acquire the loudest, angriest or the most bizarre music available, Raunch Records was one of the few places in the 1980s that had those records available for consumption.

“I’m kind of interested in the culture right now, the kids are more responsive.”

Nowadays, record stores are becoming an infrequent and rare staple in present day “punk” culture. The internet, social networking sites and YouTube have become the major musical reference point for many people, young and old.  Long past are the independent photocopy zines from various cities around the world and the self-addressed-stamped envelope inquiries for catalogs and stickers from your favorite bands or indie record labels.  Brick-and-mortar record shops are still around to browse and hang out in, but the immediacy of the electronic age has taken the discovery and exposure aspect of hearing something new, something extreme, into the full control of the listener, who may rather be homebound instead of being in the actual element of the music and the culture they so pursue.

So, why in the world would someone want to take the risk of opening a record store, in a time when music is less about the physical manifestation of a record or CD, and more about instant digital gratification of the music itself, cheaply downloaded, and portable? Why would someone invest in a business in the middle of a panic-stricken recession, and deal with the burden of schizophrenic economics?

Brad Collins is going full-on with the resurrection of Raunch Records, knowing all too well what a financial gamble it may be. His reasoning is not for any kind of “get rich quick” aspirations, and he acknowledges that others may question his intentions of this business endeavor. “There’s been a couple guys that are going ‘You’re a dope! What are you doing it for?’” Collins says, “As far as the [current] economy goes, most people are saying ‘you’re crazy!’. Even the distributors that sell the music are sayin’ [I’m] crazy …Well?…. I really liked doing it before…it was fun!…for the most part, I really want to see everybody again … fuck, I don’t know! I’m 52 fuckin’ years old. Am I going to relate to the 16 year olds? I’m not sure yet.”

Raunch Records opened at its first location on July 4th, 1984 on the corner of Fourth South and Fourth West. The building that housed Raunch would soon after be known as Positively Fourth Street, which was also the home of rehearsal studios and the legendary Painted Word all-ages music venue, which brought in most any cool, touring band of the time if the neighboring Speedway Café couldn’t accommodate them. It was in the worst part of town at the time, hidden by a now non-existent overpass, just south of the then-drug addled and homeless populated Pioneer Park.

Collins, along with his partner in crime Daphne Menden, started Raunch with the intention of carrying the most underground of underground music, from international anarchic-politico punk bands like Crass and Conflict to noise and proto-industrial bands ala Throbbing Gristle and the Butthole Surfers as well as bands from the first incarnations of the So. Cal and Straight-Edge scenes and any local that happened to have a self-produced tape or vinyl record out.  Along with the diverse and hard-to-find music selection, the two curators were also very much into promoting the live music scene happening in town, supporting shows from both local and touring bands alike. The doorway of the store always had stacks of flyers promoting upcoming shows at the Painted Word, Speedway, Alice’s Café and Cinema in Your Face as well as any of the numerous Fairgrounds concerts. You could also find the first issues of the newly-published “Salt Lake Under Ground” magazine, still in it’s smaller, newspaper format.

Daphne moved to Los Angeles around 1990 after the city closed down the Positively Fourth Street building due to zoning violations. Brad relocated the store to the somewhat more accessible address of 800 South and Main Street. This incarnation of Raunch was short lived and produced mixed results. Business may have increased somewhat, but the shop didn’t have the same dirty/cool vibe of the 400 South locale.  It wasn’t until Brad uprooted yet again in late 1992 and moved shop to the Sugarhouse district on Wilmington Avenue that business thrived yet again. The timing was perfect for Raunch, due to the always supportive and ever-growing skateboarding scene as well as the independent feel of the area businesses he was a neighbor with. “The Sugarhouse store was really killer…for some reason, you know, we were on the cutting edge of some fashion thing that happened…[along] with the skateboard industry…so, it really was an awesome place, Sugarhouse was. It was a busy store before I even had the ‘Open’ sign up.”

“The Sugarhouse store was really killer…for some reason, you know, we were on the cutting edge of some fashion thing that happened.”

By then, Brad had expanded his selection beyond punk and hardcore and was exposing the store’s supporters to dub and reggae, as well as appeasing the skaters with a selection of boards and gear. Never short on alternative reading material, Raunch also expanded the magazine selection, and brought in books like The Anarchist Cookbook, always willing to appease the open-minds of the punks and their punk-at-heart cohorts. 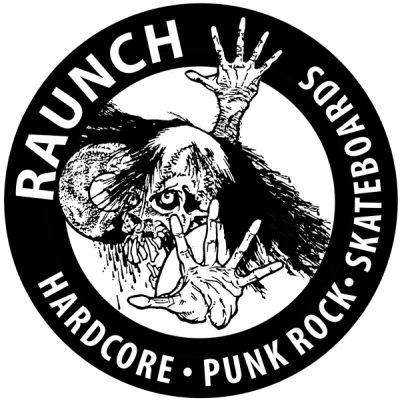 While this location thrived for a few years more, the realities of running a shop with month-to-month leases and the looming and inevitable corporate make-over of the quiet and charming Sugarhouse area became an unfortunate motivation to relocate again in late 1996. The fourth (and final) location of Raunch was located on Salt Lake’s east bench in Holladay, but by then, business had decreased so dramatically, that Brad decided that it was time to take a major break from what he had worked so hard to keep afloat and work a normal job in the sports and recreation industry. Raunch had to reluctantly close its doors in the spring of 1997.

“I didn’t listen to the music for a while…I don’t know if I was burned out, but I just found a new interest. I started playing a lot of golf,” Brad admits, with a level of complacency.

During the 11 years since the closing of Raunch, Brad pursued his hobbies, went out to the occasional show, and decompressed from the scene that he indirectly influenced through his efforts as a supporter, promoter and a go-to reference of everything non-mainstream within the city. Just as Brad has been cheekily deemed by some as the “godfather of the Salt Lake scene,” he also is quick to pay homage to those before him who helped maintain diversity and give this town a desperately needed voice of free thought.  Brad will quickly name-check people like Steve Holbrook, one of the founders of KRCL, who motivated Brad to play the loud and fast music he loved on his long running Saturday night radio show “Behind the Zion Curtain” which ran from 1979 through the late 1990s. Brad also acknowledges the underground and indie shops of the pre-Raunch era, like Tape Head Co. and Wally Records, as well as Raunch’s contemporaries of the early days like Randy’s Records, the Heavy Metal Shop and Grunts and Posture, as well as Cosmic Aeroplane, regarded as one of the premier Utah alternative bookstores which was open from 1977 though 1991. Brad described Cosmic owner Steve Jones as “instrumental in a lot of us becoming who we were in the underground. There was nowhere else to get that stuff,” Brad says of the eclectic books, t-shirts and records that Cosmic was famous for. Brad would by no means admit that his sole efforts with the record store had changed and nurtured the subculture of Salt Lake as much they did, but would rather give props to all who strived for the diversity in a collective and communal sense.

With the new location, once again in the storefronts of what’s left of “Old” Sugarhouse, Brad has no specific focus, only drive to re-start what he enjoyed for so many years before. With a re-ignited interest in Raunch t-shirts as well as the public’s increasing preference of vinyl LPs over the dying format of compact discs, there seems to be a growing nostalgia for the hey day of local punk. The new location, housed at 1119 East and 2100 South, will share the classic elements of the original 400 south location, as well as the vibe of the original Sugarhouse store, complete with the crazy painted walls and old fucked up floors. Expect the vinyl-friendly store to carry many LP reissues of classic punk rock, as well as stuff you’ve never heard of. This time around, Brad is also going to focus on more proprietary stuff adorned with the Raunch name, like skate decks and a full line of Raunch logo wear, no longer just sold through word of mouth or eBay. And expect the lack of convention of normal retail, since the rules never really applied to Raunch.

“There’s a pretty good selection of underground stores here. I don’t know where our niche lies, really… but I’m thinking it lies with the hardest and the fastest [music].”

“I really don’t think [the re-opening of Raunch] has anything to do with me,” Brad states. “It’s like this feeling, this scent, the smell, the look, the remembrance…I’m not sure exactly what it is…and I’m trying to re-create it here in a way, [but] in another way it will be totally different. I’ve always tried something different…I think that’s what this store is all about.” Brad sarcastically warns, “There might be a bin of blues, jazz, world, and reggae music in here,” which is itself a statement of diversity, deadpanning that “you can’t live on hardcore alone.”

“I’m kind of interested in the culture right now,” Brad admits with subdued excitement adding, “the kids are more responsive,” open to new music, new ideas, as well as rekindling interest of punk and its origins.

Brad understands the need for co-existence within the independent business community. “There’s a pretty good selection of underground stores here. I don’t know where our niche lies, really..but I’m thinking it lies with the hardest and the fastest [music],” and half-jokingly adds If the stuff isn’t hardcore enough for some of the die-hard customers, Brad requests that you “start your own fuckin’ band!”

Raunch Records officially re-opened their doors on Black Friday. The store is located at 1119 East 2100 South and is open Monday through Saturday 11-8 and Sunday 12-6. Club Vegas will host a Raunch Party on Friday, January 1st.