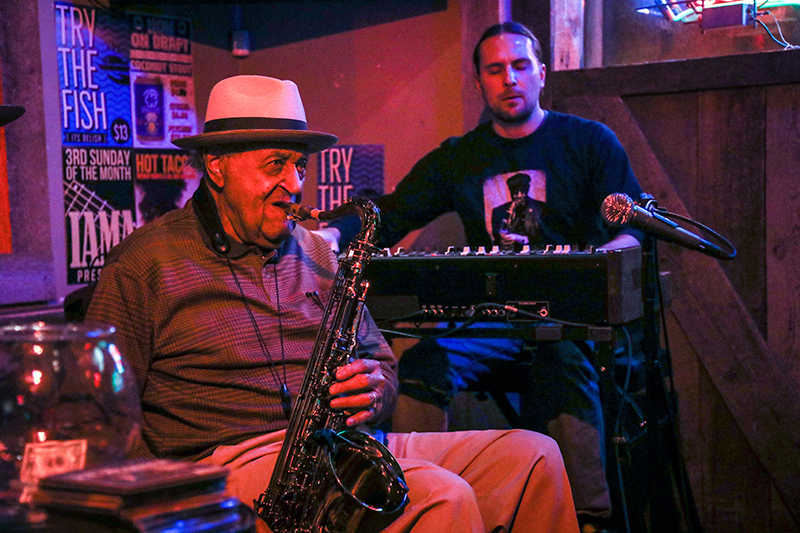 Ogden-based tenor saxophone virtuoso Joe McQueen belts into his tenor saxophone voraciously at Garage on Beck. McQueen is an almost monthly fixture and attraction at the Garage—the crowd hinges on every musical phrase, having braved the unpredictable April weather on the patio to watch him play when I saw him there. The audience, as well as McQueen’s bandmates, tap their toes to keep the time with every catchy, arpeggiated solo that McQueen belts out with incredible vigor. He sits center stage with a bottle of O’Doul’s to “wet the whistle,” taking swigs, adding dynamic embellishments, and snapping along as his bandmates take turns improvising solos. At the conclusion of the piece, McQueen announces his upcoming 100th birthday, and the crowd goes wild.

While being 100 years old and in good health is a feat in itself, McQueen’s legacy is all about his impressive prowess as a musician, and one who performs as often as he does. His legacy is also deeply intertwined in Ogden’s history.

In 1945, McQueen, along with wife Thelma McQueen, came through Ogden on a tour with his band at the time. Famously, one member of the band gambled away the group’s earnings from the tour en route to Ogden. When that member was kicked out of the group, McQueen reformed the group and ended up making a home for himself in Ogden.

Frequenting jazz clubs in the days of segregation, McQueen is most often associated with the legendary Porters & Waiters Club, run by AnnaBelle Weakley, who was known affectionately as the “Queen of 25th Street” and the first black woman to run a business in Ogden. McQueen, who is often cited as a forerunner in helping racially integrate Ogden’s jazz scene, is humble about his role in Ogden’s history. “I don’t particularly care about that legend business,” he said in a 2007 interview featured in the documentary Ogden: Junction City of the West, when asked about what it is like being a living legend for Ogden. For him, the decision to push Ogden’s boundaries by refusing to play venues that wouldn’t allow black people in the audience was simple: “If my friends can’t come in here and hear me play, I’ll just play at places where they can.”

At Garage on Beck, McQueen performs with his usual group: guitarist Brad Wright, drummer Don Keipp and organist Ryan Conger, with McQueen’s good friend Brad Wheeler making cameo appearances on harmonica. Pieces include Herbie Hancock’s “Watermelon Man,” which McQueen says is the closest to rock n’ roll he will ever play, as well as indulging the audience with his own composition, “The Thing,” which he wrote at 95 years old. “The Thing” is a bubbling, bouncing piece that oozes energy and excitement, fitting for McQueen’s playing style and tone as he nears his 100th birthday. One story McQueen tells during a performance at Life in Christ CRC in early April is of the spin he put on Duke Ellington’s composition, “Take the ‘A’ Train,” which McQueen created his own ending for. “[Ellington] was in Ogden, maybe 60 years ago, and I played [“Take the A Train”] that night. [Ellington] said, ‘Where’d you get that ending from?’ I said, ‘Mr. Duke Ellington, you’re not the only one that writes music.’”

After playing the same horn for 50 years, McQueen was recently gifted a beautiful new saxophone—complete with his signature engraved on it—from Sandy–based Cannonball Musical Instruments, according to the February 2019 article, “About to turn 100, Joe McQueen gets a new sax—and a state proclamation,” on McQueen in the Standard-Examiner by Mark Saal. For McQueen, his tenacity and endurance as a saxophone player is something that he attributes to “the good Lord”—and his saxophone. The ever-humble McQueen picked up a saxophone first as a high schooler, and is self-taught, soloing and playing jazz standards completely through memorization and feel. From the audience’s perspective, McQueen has no problem as the band leader of his current group, soloing with a strong, gritty tone, similar to the tone of his voice.

There’s something completely unique about watching McQueen perform, as a living testament to the height of jazz music. While the audiences of his performances give standing ovations every time, McQueen humbly nods his head, mouthing the words “thank you” to their praise. His sage advice, which he sprinkles in with his stories in-between the pieces of his set, follow along the lines of doing good for others and putting your spouse before yourself in marriage. In fact, as his 100th birthday approaches, he seems more proud of his also upcoming 75th anniversary to his wife, Thelma.

McQueen, who can boast of playing with jazz legends such as Charlie Parker, Count Basie and Dizzy Gillespie, is a musical testament to the glory days of jazz music. There’s no doubt in my mind that McQueen’s refreshing take on jazz and incredible stories could grace Utah audiences for years still to come.