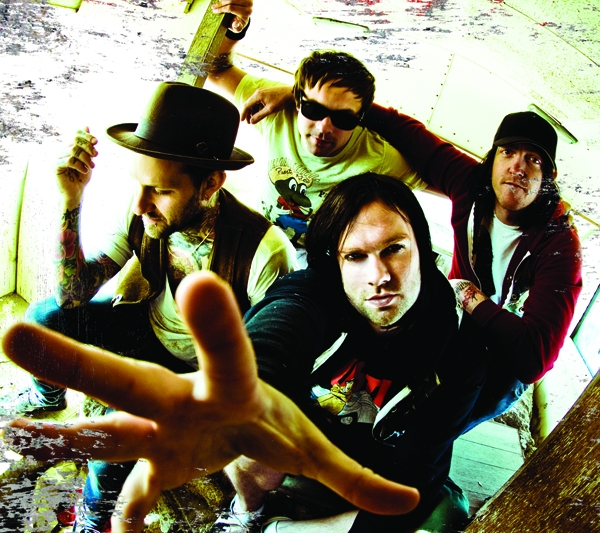 The Used: Fuck You Cakes and French Movies

Say what you will about Orem’s The Used, but I have a small place in my heart for the first local band I ever interviewed on air and the first rock band to really “make it big” outside this small bubble. Bert McCracken has also been known to call my work line when he’s in town and really, really drunk to talk about his life as a rockstar in Venice Beach, Calif. The last time we spoke, it was to reminisce about Asian massage parlors on Pico and Bundy (no shit). This time it was a bit more professional as Bert got away from the music and started dishing on his life outside of rock and roll.

“They’re called ‘Fuck you cakes,’” McCracken says, explaining a culinary creation he’s been working on lately. “It’s like this little kind of chocolate souffle that I’ve kind of perfected over the years.” That was just one of the many foods McCracken was crafting for a barbeque to celebrate getting home from Germany a few days ago. The rest of the meal, including some beer-battered shrimp and a pork butt he’s been roasting for tacos, shows McCracken’s recent fascination with food going in further directions. “There’s tons of chefs that I would love to cook with for sure. I’m really obsessed with new up and coming chefs––even old school established chefs. Mario Batali––I’d love to hang out with that dude in the kitchen all day. He’s one of the Iron Chefs. He’s a badass.” For somebody who has already met one of the kings of rock (remember that little TV show called The Osbournes featuring Ozzy as the Doddering Old Fool character?), it is apparently time for McCracken to work with luminaries from different disciplines.

I’ve never really asked McCracken about his take on that show and MTV in general. “Fuck MTV. I wish MTV would play music,” McCracken says in response. “I really have no regrets about my past or the way they tried to present me on the show. I met a girl who was cool and it became this really big blown-out-of-proportion thing. What can you do? They’ll do whatever they want to do,” McCracken says. As somebody who first watched that show solely to see MTV make McCracken fall on his face, I was surprised by his response. “We all have things in our past that aren’t the raddest things. I’m still good friends with her, she’s a really cool girl.” McCracken also adds that he thinks it was “pretty punk rock” the way his character was depicted on screen.

There does seem to be a disconnect between his on-stage character and the off-stage/screen representation, which McCracken acknowledges with a word about names. “All my friends call me Rob, my wife calls me Rob. I was in a punk band called I’m With Stupid. It was with a kid named Robby and he gave me the nickname Bert. I like it. It’s kinda the ‘crazy guy’ who’s on stage––not the guy who’s making ‘fuck you cakes’ in his kitchen.”

McCracken always waxes nostalgic about his time in Utah, if you can ask him about it during a moment of lucidity. He has this to say about why he left such a beautiful place: “I kept getting arrested in Utah. I figured instead of paying 15 grand for a lawyer for every time I got fucking busted, I’d come out here and not have to talk to any cops.” It seems to be working: No shocking headlines have followed McCracken since he moved to California, which you wouldn’t think coming from a guy who kept getting busted for “just driving around drunk with our guns and doing cocaine.” Utah County pigs just didn’t appreciate that, apparently.

If you’re curious about what McCracken thinks about this little publication he still has fond memories, “I remember almost the very first interview we ever did was with SLUG. We did a little photo shoot up in Salt Lake City. And all the banging punk records––like I heard about The Bronx first from SLUG and they’re fucking sick––one of my favorite bands.”

When he’s not reading SLUG, C.S. Lewis or the latest Chuck Palahniuk––“His new book Pygmy is off the hook”––McCracken is doing something else you might not think he enjoys. “I’m obsessed wtih  foreign film. One of my favorite movies is this French movie called Irreversible. I saw it in a theater and half the theater walked out,” McCracken says––due to the 20 minute rape scene which McCracken actually used as a selling point for the film. He is also interested in, and already is, making his own cinematic work. “I guarantee within five years me and Quinn [Allman of The Used] will have made a movie.” That’s not the only project he’s envisioning though, “The Used is in pre-production for a short horror movie with Alec Gillis, who did all the special effects for Alien and Predator. It’s about a small concept we came up with,” McCracken says. A concept involving a bus gassing and a creepy basement where organs are harvested.

The Used will be coming back home very soon, and McCracken’s final words are meant for you, dear Used fan. “Some of the most hardcore Used fans are in Utah and I’d like to send all of the love in my heart. We’ll see you in Salt Lake in October.”

On Saturday, Sept. 5 The Used will do an in-store Graywhale in Orem at 1 p.m. and another at the Taylorsville location at 4 p.m. The band will play at The Great Saltair on October 10th.