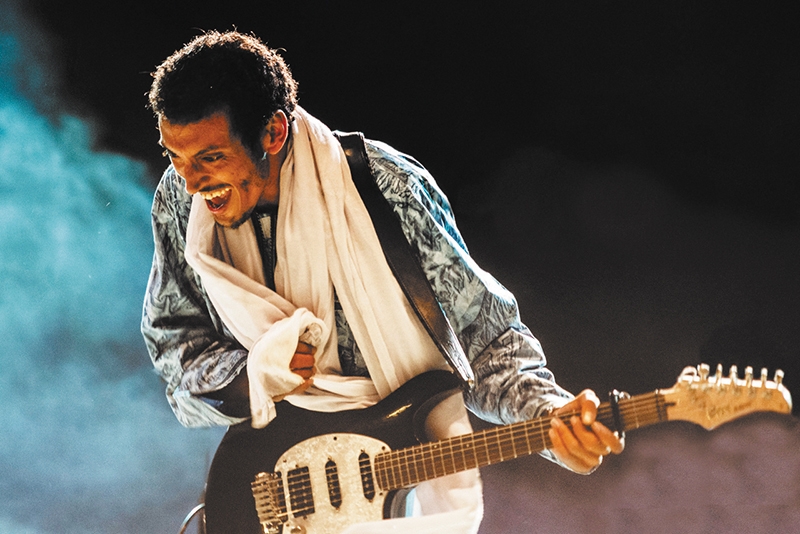 The Wanderer’s Tradition: An Interview with Bombino

Omara Moctar, known internationally as the Nigerian psych-rock hero Bombino, is the local and living legend of a small tribe in the country of Niger. While on his international tour, Salt Lake will have the good fortune of seeing him at no charge at The Salt Lake County Building on May 15–17 (along with over 70 other talented musicians from around the world) for The 30th Annual Living Traditions Festival this summer. Recently, SLUG was able to interview Moctar about his music and his message. All responses have been translated by his manager, Eric Herman.

Bombino is a member of the Tuareg tribe, who are known historically as nomads—dwelling around the Saharan Desert as merchants, fighters and explorers. In 1990, the Tuareg rebelled against the Nigerien government and were eventually exiled to surrounding countries. It was at this time, at just 10 years old, that Moctar first picked up a guitar. Because the Tuareg used folk songs and music to spread the message of their struggle, Moctar’s introduction to music was under rebellious terms. Regardless, “I was not interested in fighting against the government,” says Moctar. “I was interested in music, in playing my guitar [and] in making people feel joy through my music.”

By 1996, he lived in Algeria and Libya, but returned to Niger in ‘97. While Moctar was living in Libya, he met some musician friends who exposed him to the likes of Jimi Hendrix, Mark Knopfler and many others. Throughout the following decade, his skills skyrocketed, and Moctar ascended from being a backup guitarist to a band leader to touring to releasing a record with filmmaker Ron Wyman. He released his first major record in 2013—produced by none other than Dan Auerbach of The Black Keys at his Nashville studio. It was through this latter record, Nomad, that Moctar gained the attention of audiences worldwide.

“We had the very good fortune of being invited by Dan to go to his studio and record our album there with him,” says Moctar. “Dan is a genius, and he really understands how to extract the best things from the musicians he works with. I came with all the songs already in my head with the exception of one jam we did all together, [‘Niamey Jam’]. Apart from that, all the songs are [either] songs I had written or traditional songs adapted often by different musicians in Niger.”

Blending the sounds of traditional Tuareg folk songs with Western blues and psychedelia, Bombino is the embodiment of a unique cross-cultural style, which is inviting to any ear. Moctar typically begins a song with melodic, repetitive riffs that build with mesmerizing note noodling and full-bodied polyrhythms. To say he is just psychedelic or just Nigerien folk, though, is to miss the point. In his mind, all music is akin. “Of course, there are many similarities between our folk music and especially the music of Black Americans like the blues, like rock n’ roll, like funk and jazz and hip-hop,” says Moctar. “All of these styles come from the same source of African music. We are a big musical family. This is why I fell in love with artists like Jimi Hendrix and Dire Straits right away. Their music touched my heart immediately. I did not need to learn about it. They were speaking my language.”Using few but powerful lyrics, Moctar repeats the message of his songs throughout in a mantra-like chant. The effect is hypnotizing. In his playing and singing, Moctar seems to invite the listener into his circle, entreating them to dance or to contemplate his words about Tuareg unity, heritage, women’s rights and the goal of peace.

It is this patient, thoughtful quality of Moctar’s that is perhaps the biggest factor in hearing and appreciating Bombino. Certainly, the songs in Nomad do not feel rushed or slammed into your ears. Moctar’s goal is to not incite rebellion and anger. Rather, his music is a welcoming gesture toward community and of questioning the Tuareg’s direction as a people without resorting to violence. “To feel angry or depressed, these are normal feelings, but they are not productive feelings. They are not useful feelings,” says Moctar. “To have patience, this is very useful. Patience is perhaps the most important quality for someone to have because, if you are not patient, you will do things that harm yourself in your life.”

For more information on Moctar and his project, check out his website at bombinomusic.com and look up his upcoming concert in Salt Lake City at livingtraditionsfestival.com.