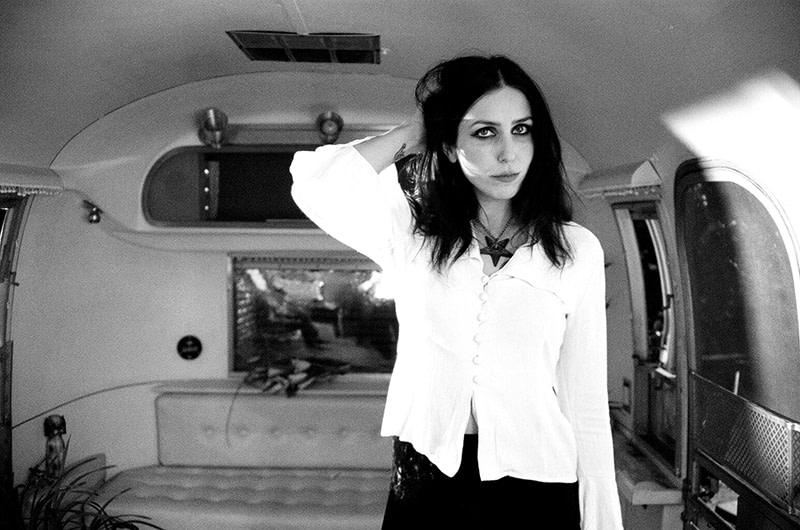 The World Smolders Within Us: Chelsea Wolfe and True Widow

“A lot of different forest habitats need to burn in order to germinate new life… I think that’s something that’s also reflected in us. We have to go through hard times and painful times in order to learn,” says Chelsea Wolfe in regard to the title and theme of her new album, Pain Is Beauty. Known for the liberal use of elements from different genres in her eerie, macabre yet pretty music, Wolfe adds elements of industrial and witch house to her canon with her new album. She has embarked on a tour to promote Pain Is Beauty, which was released Sept. 3 on Sargent House.

In response to the Wolfe camp’s search for tour support, the management of “stonegaze” trio True Widow, who released Circumambulation on July 23, reached out and secured their spot on the tour. These two acts on the same bill generate a notable synergy—True Widow highlight the cultic ritual of making and creating music, which they impart to listeners, while Wolfe reveres the natural world and questions humanity’s permanence on the earth, where pain underpins a sense of absolution found in natural disasters and love. These two complementary yet quite different musical forces will culminate kaleidoscopically at the tour’s Salt Lake City stop on Sept. 25 at Urban Lounge.

Following Wolfe on Instagram (@cchelseawwolfe), I stumbled across a photo by Logan White that Wolfe posted from a shoot originally for a Subbacultcha! feature from 2012: Wolfe lies in a yellow shirt on a beach, her skin white and hands in the repose of a fresh corpse—with her jaw open and eyes blank, she looks veritably dead as nighttime waves lap at her body.

Though this photo came about at White’s suggestion for their shoot, it may well have foreshadowed Wolfe’s fatalistic naturalism in Pain Is Beauty. “I was really … interested in the earthquake and tsunami in Japan.

I watched a few documentaries that had a lot of firsthand footage, and it was just so intense to see how something like that can happen so fast, and just the fact that [it happened] to many lives,” says Wolfe. “For this album, it’s definitely reflected as nature that’s bigger than us, and the fact that, in a second, it could all be gone, and we have no control, really.”

The penultimate track, “The Waves Have Come,” directly addresses the gargantuan, melancholic loss that people who suffered through the earthquake/tsunami experienced. The song features mournful piano that leads into a burst of violin weaving atop a subtly disjunctured beat that becomes thicker and lusher to provide a climax for the record.

The lyrics read, “all you know gets older when the sun goes down and everything begins to fade away the waves have come and taken you to sea never to return to me.” The closer, “Lone,” operates as a denouement for the record, and starts as a bare-bones acoustic song with Wolfe’s melancholic singing, which then eclipses its minimalistic character with spaced-out, otherworldly synths and looming electric guitar. The lyrics illustrate the wind sweeping a post-human Earth. Certainly, the wolf howls in the lyrics point to world’s solace, where the planet ends the struggle to coexist between humans.

That being the conclusion, Pain Is Beauty moves from introspection to outward apocalypse, thematically adhering to different strata of human pain. The strident electronic-bass percussion of the primal “Feral Love” bubbles underneath language that chases an elusive, dark Other. “We Hit A Wall,” with its doom-like gait and riff-based guitar work, deals with the struggle of simply loving: “It’s really just the idea and the fact that love isn’t always easy, that it’s a lot of hard work,” Wolfe says.

Here, Wolfe says that she aimed to undermine the pop-cultural notion that love is chipper or freeing—“That’s why, at the end, it’s like, ‘I’ll show you how to love’—it’s ‘an endless war,’” she says, quoting the lyrics. The “endless war” of love in “Sick” continues to mar loving, as two people take turns hurting each other. The funereal organs that transform to kraut rock bass traverse guilt and spite in a song that begins with “this suffering brings me closer to you/and time is broken and moves slow.”

Indeed, as Wolfe explores different levels of suffering linguistically, Pain Is Beauty runs a diverse soundscape to form a record that comes together as a cogent body of work. Wolfe says that the band has been working on the album’s chief electronic songs for “a few years now,” and originally planned to release them as a separate project. After experimenting with the songs live, though, they let them flourish as Chelsea Wolfe songs, and developed them into the eclectic ensemble of tracks that is Pain Is Beauty. She says, “I know some people don’t understand my way of putting whatever genre I want onto one album. [On the acoustic album, Unknown Rooms,] I tried to hone it in a little bit more.

With this one, I felt like the concepts of the songs fit together in a certain way—the feel of them fit together, so it was OK to put a bunch of different genres into one home.” Wolfe asserts that she allows the audial-narrative arc of her albums to play out naturally—“I don’t usually approach any song or album with ‘This is what I’m going to do,’” she says. Referring to her vocal inflection in certain areas of “House of Metal,” she styles her voice as an instrument in itself rather than solely a vessel for language. “Rather than just singing over something, I sort of sing ‘into’ it,” she says.

From the rock styling of debut The Grime and the Glow and breakout album Apokalypsis to the Rudimentary Peni tribute, Prayer for the Unborn, it would appear that her genre crossover stems from an approach to making work that, simply, sounds good. Acknowledging her previous insecurities of being a self-taught musician, Wolfe says, “Over time, I guess I became more comfortable with it.

I think maybe a lot of this album is a culmination of me becoming more comfortable with who I am as a musician as well—doing what I do and trying to do it the best I can.” From joking that she had multiple personalities as a kid to manifesting this multiplicity in her music, Wolfe feels that she has earned a genuine listenership. She says, “I’m just really grateful that people are willing to listen and enjoy it for unnamed reasons … They find something in it that they like and can relate to, and they’re happy to listen to it.”

True Widow bassist and vocalist Nicole Estill says of the tour with Wolfe, “I think it’s going to be a really good pairing. I think that she’s got quite a huge fanbase behind her that I didn’t even really know about—all my friends are, supposedly, secret Chelsea Wolfe fans.”

True Widow are no slouches themselves—they sent Internet reviewers into raptures with Circumambulation’s release on Relapse Records. “Circumambulation,” the exercise of moving around a sacred object within a ritualistic framework, is an apt name for an album that elicited my own introspection and continual devotion to hearing it the whole way through—“I think that, pretty much anytime you listen to music, it’s going to affect you in certain ways.

A lot of times it’s emotional—a lot of times it’s mental, and I think that that in itself, the act of sitting down and listening to something, is something that can be spiritual, too,” Estill says. The album does not pay homage to any religion or codified spiritualism, but suggests that music can be “its own deity,” as Estill puts it.

True Widow constantly create music and work on new material even when they’ve recently put an album out. Even before they released Circumambulation (at the time of this interview), the band had played a few songs from the new release. Estill says, “We’ve played a full handful of songs on this new album live, and people seem to like it!”

Although True Widow have not made any large departures from their cornerstonegaze sound, Circumambulation functions as a reevaluation of the band’s dynamics—it ekes itself out in a self-reflective way. “It’s, to me, like one big, long breath,” says Estill. “It starts slow and crescendos and exhales at the end in sort of a release. So, I think that it becomes more singular in that way.”

The album begins sparsely with “Creeper,” with little guitar and solely guitarist/vocalist Dan Phillips’ singing, until Estill bursts in with another vocal hue in “Four Teeth.” The album is by no means a concept album, but Circumambulation’s aural storyline bolsters its unicity and each True Widow member’s synecdochal relationship to their music.

In her own songwriting process, Estill says that she starts out with lyrics first, whereas Phillips begins with melodies and sound. Either way, their songs snowball in ways that continue to be self-referential—“The lyrics, for us—they’ve always been pretty personal,” says Estill. “I think that anybody who writes lyrics, they kind of have to, or else they become uninteresting to you.”

Songs like the even-keeled “HW:R” feature both singers, but the song maintains a solid “I”—“I can’t sleep./I’ve tried elixirs too. Dulled it out but still I knew,” it reads. With drummer Timothy “Slim” Starks’ pulsing beats, Estill and Phillips lend their voices to the roles that their songs demand, but for a reflexive satisfaction all the while: “We just make the music that we want to listen to … We like to listen to it—in a weird way—more than most people,” says Estill, with nary a trace of arrogance.

Their ceremony of introspection translates as perfect music for practicing yoga or watching a rainstorm. NPR seems to agree with this, as they featured “Four Teeth” on June 19, deeming their music “perfect for hiking.” As shown by this marker for their success in melding stoner metal and shoegaze, True Widow, too, retain an optimal appeal for listeners.

“It’s surprising, actually, how versatile that it is for many different fans,” says Estill. “We didn’t think that it would be so widespread.” Chelsea Wolfe acknowledges the clout that True Widow bring to this tour, saying, “They kind of just came out of nowhere, and I was excited because I really like their music.”

With Wolfe’s circumambulation of nature or True Widow’s ritualized self-reverence, these two sets of artists will amalgamate in an exceptional showcase at The Urban Lounge on Sept. 25. The stage is set for us to gather to introspect at the behest of this music, to situate ourselves and reflect.

Estill ponders writing music in a way that’s applicable to experiencing music at all: “I think that it’s also kind of an act of revolving around yourself, too, when you’re sorting your thoughts out or sorting out the world.”