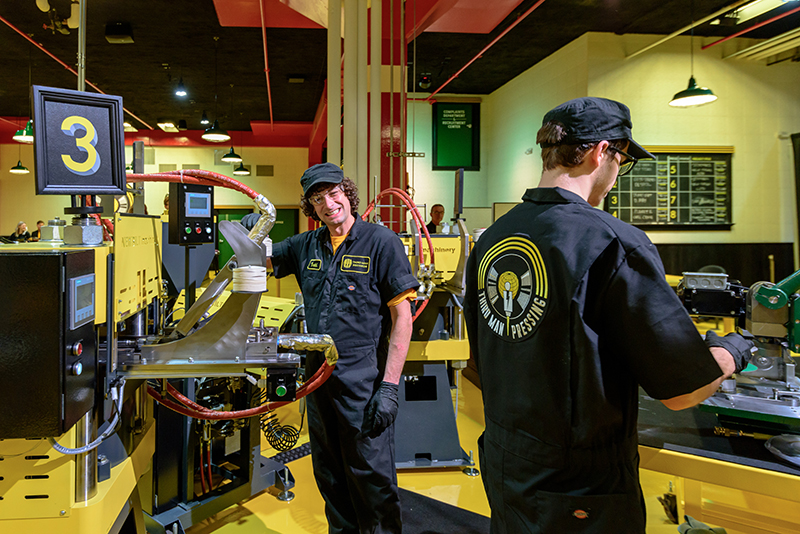 On Feb. 25 in Detroit, the impressive and ambitious Third Man Pressing opened its doors to the public.
Photo: Doug Coombe, Greg Siemasz

The independent music scene is wading past the threshold into a brand-new frontier, and Jack White is making some pretty colorful waves doing it. His Third Man Records label is beginning to answer a question that we’ve all asked at some point in time: How do you maintain an independent, DIY music ethic when your platform is no longer sitting on a personal level? Luckily, we managed to get ahold of Ben Blackwell, drummer of The Dirtbombs and co-founder of Third Man Records (even if he’s not really sure about that title). But, he admits, “I’m not sure of anything that makes any more sense.”

Third Man Records has two storefronts, one in Nashville and one in Detroit, but their mindset is larger than that. “I think it would be delusional to think that we’re just these small, local things,” says Blackwell. “I sometimes long for those days when you could just be a local label, but when you’re pressing 100,000 copies of a Jack White LP, you’re not a local label.” That’s why Third Man is getting a lot of attention lately. Their own vinyl pressing plant, Third Man Pressing, opened on Feb. 25, pushing their status up alongside the giants of the industry. But that’s not the only thing they’re juggling, and it’s not the only thing that’s setting them apart. “When you have a venue that is connected to a record store and also cuts live to acetate and also has a record label attached to it,” says Blackwell, “I mean, there’s no real comparison.”

The direct-to-acetate recording isn’t anything particularly new, but the spin that Third Man puts on it is singularly their own. Most direct-to-acetate recordings are done in a studio, but Third Man have set it up so that when a band is playing a live show at their venue, they’re cutting the master vinyl at that very instant. “What you get in the process is: You don’t get any overdubs, you don’t get any re-dos, you can’t start and stop, you’re kind of flying without a safety net,” says Blackwell, “and there’s something of the moment about that, which keeps the artists engaged and keeps them pushing harder to make it a great record.” It’s a challenge that some seriously veteran bands are looking forward to taking on. “When you get bands like Mudhoney and Pearl Jam and Melvins, all of whom have been around near on 30 years, jumping at the opportunity to record this … they’ve all recorded numerous live albums,” says Blackwell. “The reason they’re jumping to do this is because it’s cool. It’s unique. It’s not something you can just do anywhere.” This is a label that is placing itself soundly within the vinyl-revival scene by taking on the medium in innovative ways.

Blackwell himself never really left the vinyl scene. “This goes back to being a music fan when I was a teenager,” says Blackwell, “and realizing, being a fan of these bands, [that] if I wanted to hear the entirety of these bands’ back catalogue, I just had to be able to listen to vinyl. Everything wasn’t available on CD.” But necessity isn’t the driving force behind his love for the medium. “It’s just an extension of being a music fan,” he says. “Yes, I want it to be around. Yes, as someone who operates a record label, I know that when I’m buying vinyl, it’s the right thing to do. It’s one for the cause.” With the threat of the music industry going under because of the free availability of streaming music, vinyl is a way for anyone to help support independent artists.

This brings up the question again: How can DIY and large-scale production coexist? “I feel ‘DIY’ as a designator is incredibly scalable,” says Blackwell. “DIY works great if it’s one person in their bedroom self-recording, hand-labeling. But it also works great if one person owns the company and they have direction, they have a vision, and can point everyone to that vision—and that’s what Third Man is. It’s owned by one person. There’s not a board. There’s not stockholders. Third Man is Jack White. It is one guy who owns a pressing plant, who also owns a record label, who is also an artist. You can’t get more DIY than the artist owning the pressing plant … This is kind of next-level shit.” Blackwell sees the label as being run by artists for the artists, and he’s “unaware of, in history, any other pressing plant that has been artist-owned.”

The way Third Man is trying to make sure that they don’t change is by making their vinyl pressing plant open to anyone. “We want to be available and accessible to everyone, but we want to try to make a focus toward independent and self-released artists, because those are the folks that, in our opinion, drive the industry,” says Blackwell. “They’re what keep everything cool and cutting-edge and new.” It’s an exciting time for Third Man, and it’s an exciting prospect for bands who may lie outside the mainstream and who now have some serious access to the world of mass vinyl release. Whatever direction White and Blackwell pursue with this project, it’s not hard to see the vision they’re seeing. What is hard is trying not to get excited about the prospect of artists liberating themselves from commercial restraints.