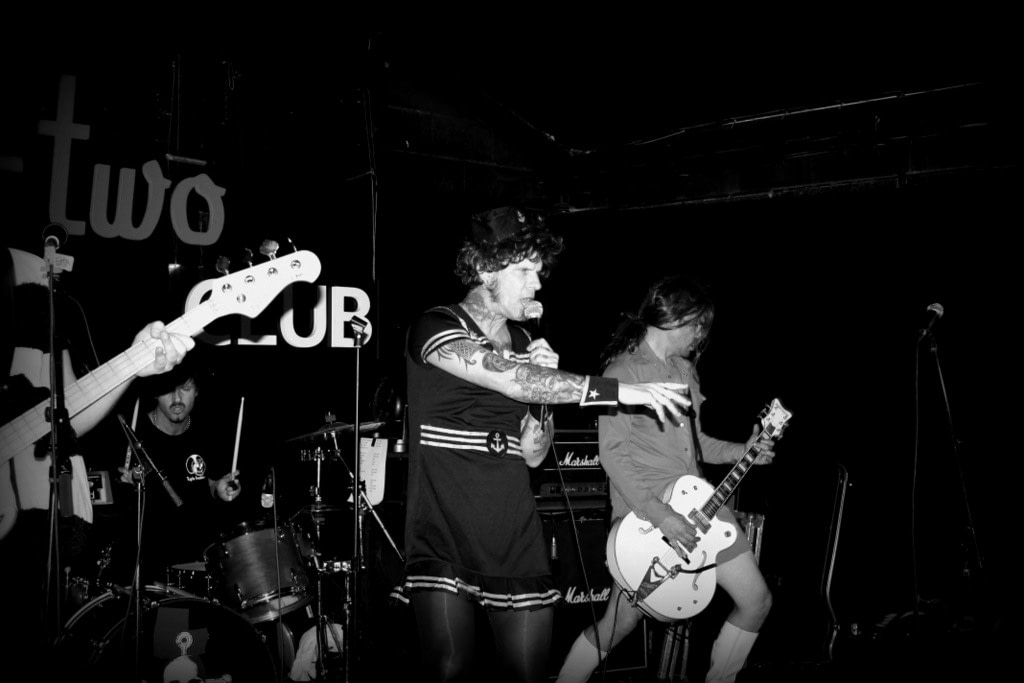 Beware of the Dogs
Throw Rag : A medical observation

The following is an interview conducted with Sean, (aka. Captain Sean-Doe) lead vocalist of the musical ‘group’ Throw Rag. Doctor Kevlar was monitoring symptoms of the Rock n’ Roll sickness that the members of this ‘band’ were displaying. Kevlar notes that only an accelerated case of this disease would cause the members of Throw Rag to exhibit such extreme behavior, as made famous by the band, in front of an assembled group of watchers. Thus begins his account of the insightful interview. As the nurse lead the drooling Captain Sean-Doe in, I fixed Sean with a good long stare, turned my tape recorder on, set pencil to notepad and asked my first question in an attempt to understand this mental condition. This question dealt with how the identity of Throw Rag became different over time. Sean’s head rolled around for a little while and then he set a solid eye on me, “The first disc was more like a country-punk disc that had a lot of rockabilly to it. Desert Shores is actually our third disc, the second one was never released. Desert Shores was more rock n’ roll because it worked better live, playing those songs like that. It was never a conscious effort to change the sound. We were into a band called The Humpers and we wanted to write songs that had that kind of energy. The second un-released disc, called 2nd Place, was kind of the bridge between Tee-Tot and Desert Shores. 2nd Place had songs that sounded like stuff off the other two albums; one day I want to put out that second album.” He then began to babble about his dog chewing on his wallet. However, I knew I had to forge ahead with my next question, which was about the future of his ‘band’, if he ever became sane enough to leave the hospital. That question brought Sean to sudden attention and he excitedly answered, “We plan on putting out a new disc in February, it will be called 13th Street and Rising and it will be a little different then Desert Shores. We recorded Shores quickly, not focusing on redoing things over and over again. Shores has that live raw fill to it, which was great. On the new disc it will still be raw, we did not want to over produce it but we wanted it a little bit more thought out then the last one. It will have a ballad, and it will have some weird symphonies on it. Jacko will sing two songs and they will be ones that he wrote himself. We will also have a live DVD coming out in October on Kung-Fu Records.” Sean began to lurch in his restraints until he tired himself out.

Once he was giving his medication by the nurse and he began to show signs of response, I asked my third question about the idea of a washboard player in what seems to be a conventional rock n’ roll band. Sean threw my candy dish full of Jelly Beans into the air and then told me, “I met Jacko when I was putting the band together and he seemed cool, so I asked him what he played and he told me the accordion. However, when he came down to the studio, he was not very good. I asked him if he could play anything else and he told me a washboard which sounded really good, so it was added to the sound.” Sean tapered off here as he began to lick each of the Jelly Beans that had been in the dish at least once. I pointed to Sean’s sailor hat and asked him about other journalists attempt to classify Throw Rag’s sound, my favorite being ‘Pirate Rock’. Sean giggled hysterically while throwing the licked Jelly Beans at me and then answered, “I have heard some pretty funny equations of what we sound like. We sound like too many things to be easily compared. People equate Throw Rag with the sailor hats, I just hope I don’t have to wear this hat for ever.” He then began to scream lyrics from “Beware of the Dog” and “Bag of Glue” which he had written in a haze of insanity. I thought I would query about those lyrical scribbling’s. Sean clamed down and whispered, “I write things I have seen or things that I thought I saw. It’s mainly about experiences in life. Secretive meth cooks whose mission message is to have everything a secret, stuff like that.” Sean began to ask for some whisky and beer, which meant the interview was coming to an end. I asked my final question about the bands equally maladjusted “fans”, masochistic groups of people who range from underground social groups as retro-rock n’ rollers, rockabilly, punk rock, and ska. I wanted to know why Throw Rag had so many followers from so many different genres of music. Sean became instantly serious and explained with sign language type hand gestures and motions. “We like anyone who has an open mind about music. We will play with anybody, and hope that their fans will like it. I think kids of today are bored with what’s out there and are looking for something different. Hopefully, we are able to give them something different.”

Sean began to bang his head on the table in frustration at what could possibly be his inability to communicate what he really wanted to say. I had the nurse come and lead him back to his room while I pondered my notes, Obviously, I sent in my recommendation that he was too mentally incapable of being released. Unfortunately, he escaped with his “band” mates and is on the loose. Readers are advised to keep a cautious eye open since authorities suggest they are headed for Salt Lake City.