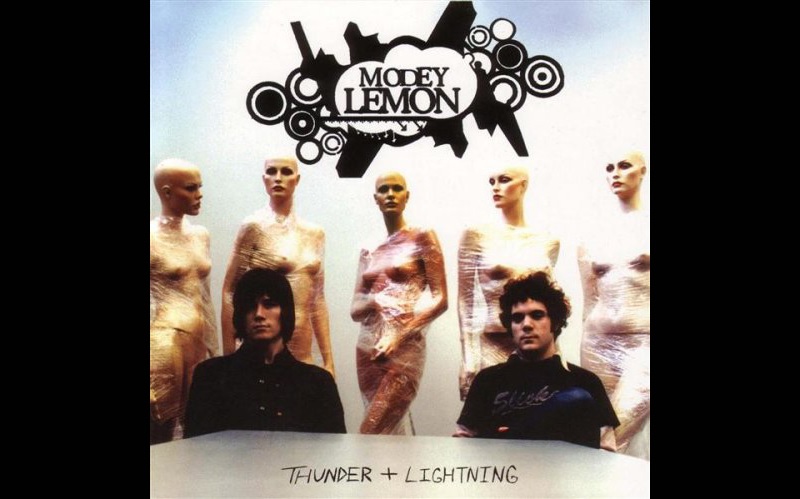 Thunder and Lightning: A Late-Night Encounter with Modey Lemon

While Phil made a final comment, “If you like the Liars new record, then you will like our new stuff,” the three of them stepped out into the night. The door slammed shut and I was alone, quaking from the encounter. The storm raged outside. My mind began to deconstruct the events of the evening, working backwards to the beginning of that dark and stormy night.

[Modey Lemon]Phil continued with his answer to my question, “We have 12 new songs. The new stuff will be different then the older, but it will still rock pretty intensely. The new songs will just be stronger. We haven’t played any of the new stuff live yet and we’re excited to see how it turns out when we hit the road in September.”

The three of them retreated to the doorframe. Behind them, the rain came down in sheets and lightning flashed constantly. I knew one more question would get them out the door and fortunately, I knew what to ask, the most cliched line in rock journalism: “What is the future of Modey Lemon?”

Sweat rolled down my head from the intensity of the situation I was in. In desperation, I thought back to my earlier research. Suddenly, a revelation sparked in my head. The three began to lean over me as I shouted out, “You guys started as a two-piece guitar-and-drums combo, but you added a third member just recently, why?!”

Phil leaned back smiling and answered, “As a two-piece, it forced us to be more creative; it was more of a challenge. We were able to deconstruct our influences until it was what we wanted. For our new material, we wanted to try more texturing and depth. We added our friend Jason, who also produced the second album. He plays guitar and keyboards, which frees us up to pursue more things musically.”

The demand came again: “Ask another.” Fearful of the consequences, I complied. “What is the mission statement of the band?”

Phil replied without pause, “We try to channel the music that we love and admire. We don’t want to completely replicate those sounds but incorporate them together, but with a degree of musical freedom -psychedelic, garage, electronic, folk, repetitive monotonous sounds that are like Kraftwerk. Basically, we make records that I would want to listen to. An album that could be listened to early in the morning, when I’m sharpened but delirious from lack of sleep, so that I would be able to focus on all the sounds that come out in one song.”

The three of them moved menacingly closer. I was filled with immense dread and decided I better think of better questions, starting with the one that nagged at me the most: “What exactly is a Modey Lemon?”

The three figures backed off a little. Phil quickly replied with eager enthusiasm, “It does not really mean anything; it’s just an absurd name. We wanted a name that when people heard it, they would associate it instantly with the band.”

There was another pounding knock on my back door. I quickly opened it, expecting to see the announcing crow on its balcony perch again. Instead, there were three hooded figures. I fell back into my chair and stared in shocked bewilderment. They silently entered and stood in front of my chair. One of them threw his hood back and I instantly recognized him as Phil, lead singer/guitarist/keyboardist of Modey Lemon. He stared at me with a hardened, puzzled look on his face and then said starkly, “Ask me a question.”

Modey Lemon is a three-piece band from Pittsburgh which is made up of two guitarists; one which sings, and both alternating with keyboards and a backbone drummer. They have two discs, the latest on Birdman, which is also the label of The Warlocks. However, there is a darkness and menacing approach to Modey Lemon’s blend of metallic garage and keyboard mixture lacking in The Warlocks.

The door flew open and I spied a crow sitting on the railing. It tilted its head and croaked the words, “Modey Lemon, Modey Lemon!” It then flew off, leaving me puzzled as to its appearance and message. I closed the door and went back to the search engine on my computer to find out what a Modey Lemon is.