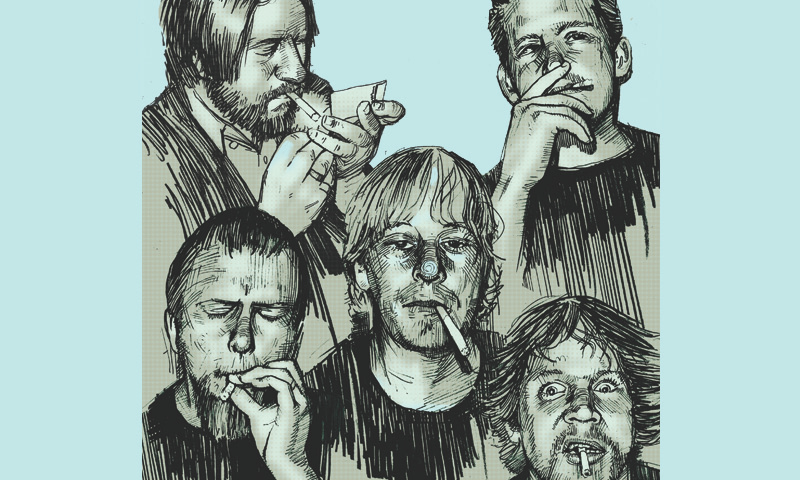 Thunderfist was put on this planet for one reason and one reason alone: TO ROCK! Singer/guitarist Jeremy Cardenas describes the band’s sound as “straight-ahead rock and roll,” and he ain’t lying. Gig posters of Turbonegro and Supersuckers are plastered around Cardenas’ living room, and their influence is apparent in Thunderfist’s music. No-frills, high-energy, beer-soaked rock is Thunderfist’s game, and they play it better than most. 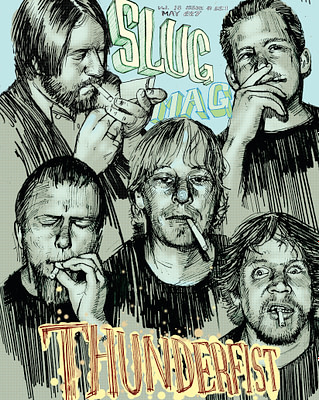 Thunderfist has been painting the streets of Salt Lake City red with their brand of balls-out rock for about eight years now, and though only Cardenas and drummer Erik Stevens survive as original members, the lineup changes have only helped Thunderfist to better evolve into the rock-n-roll monster that they are today. Current members of Thunderfist have served time with such notable Salt Lake acts as Silent Sevens, High Beams and The Decomposers. Though the members of Thunderfist come from unique backgrounds and bring their own influences to the table, their collective passion for their music holds them all together. Cardenas said, “I can get behind anyone as long as they’ve got soul. I don’t care what kind of music they play’ I’ll play with ’em as long as they play their guts out.”

For their 2007 release, Too Fat For Love, Thunderfist once again enlisted Jack Endino as producer. Endino’s credits include albums produced for Supersuckers, The Melvins, and even pre-mainstream Nirvana. Clearly, the guy knows how to make bands sound loud, hard and heavy. Endino’s expertise in creating raw rock-n-roll makes Too Fat For Love a perfect re-creation of the experience that is a Thunderfist live show. “There aren’t a lot of studio tricks or Pro Tools editing or things like that,” Cardenas said, “It’s just how we sound.” The result is a raw and energetic album that’ll cause your speakers to drip sweat and spit at your body as it’s rocked from one side of the room to the other.

Thunderfist isn’t one of those high-concept, hoity-toity art-for-art’s-sake bands. They’re a genuinely honest rock-n-roll band out to have a good time and provide you with the perfect soundtrack to a drunken night of rockin’ out. “We don’t really have a message,” said Cardenas, but he says if you go to a Thunderfist show, “You’ll get everything we have to give.” Really, Salt Lake City couldn’t ask for a better band to represent it at the Hyperactive Music Festival. Sure, when its all said and done their memories might be a little too fuzzy to give a clear account of what happened in New Mexico on that fateful night, but it’s a safe bet that some faces will be melted off completely by the rock n’ roll behemoth that is Thunderfist.