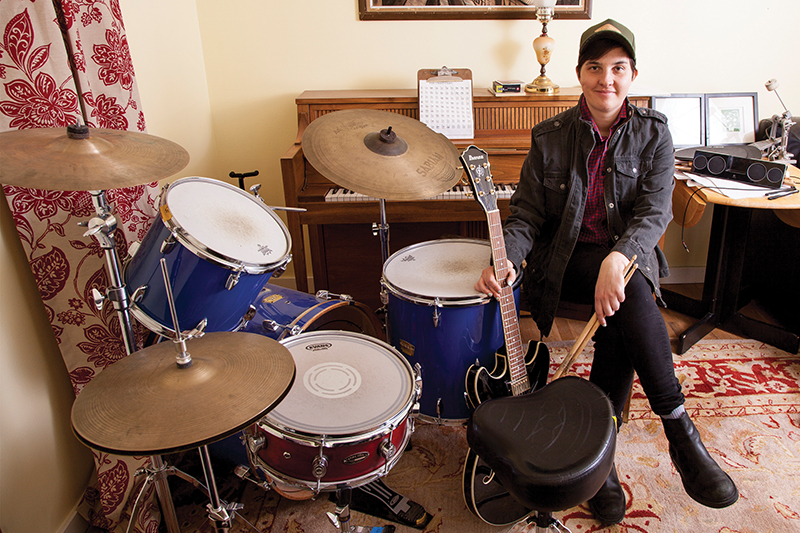 Time For a Tempo Check With Cathy Foy

I’ll admit: I thought that my years of drum lessons were behind me after I joined a band and started to develop my own style. I thought that I could learn everything else I needed on my own, studying books or watching my favorite drummers’ videos. When I sat down with Cathy Foy the other day, however, she gave me some convincing points about why I shouldn’t be so quick to move on from music lessons. Foy is a local music teacher primarily focused on budding drummers and guitarists—but she also has some useful things to teach musicians who want to take up any instrument. She runs drum and guitar lessons out of her home studio, which is where we took a moment to discuss her unique musical vision.

It didn’t take long to determine that Foy has her head on straight. She has a relaxed air about her, and the cool confidence that assures her beats are right in the pocket. “For drummers, I try to teach humility,” says Foy. “Nobody wants to play with the guitar player who noodles around the entire song, and it’s the same thing with drums.” Foy’s studio has a calming effect with simple décor, and a plethora of musical instruments name it a place of music. Foy’s message is about growth—about becoming the best person you can be. “I think the best teachers are the ones who don’t think they’re experts,” says Foy. She’s always learning—when she sits down to hammer through some guitar chords and theory, or when she’s tutoring her students. “If you approach [teaching] in a humble way, then there’s actual, real growth that happens … With music, nobody’s an expert,” says Foy. “The drums held a certain amount of magic for me—even just the snare drum, I thought, was the coolest thing to hit.” Foy started rocking the kit in her childhood: “For a kid like me, [playing music] was so valuable to the way I thought about my world and myself and having self-esteem and confidence,” she says. She’s a role model for her students, and since most of the students she teaches are young, before long, you might be hearing the results of her music lessons in Salt Lake’s future bands as those students graduate into the local music scene.

What makes a good student? “Having openness to making lots of mistakes,” says Foy. “If you’re taking lessons, you’re a courageous person … Being watched doing something is very hard.” With that said, Foy is adamant that music lessons are worth your worry. “If you just try to do it alone, you don’t have anyone to be accountable to,” says Foy. “I try to approach it in a way that is emotionally empowering for my students.” As opposed to teaching students by a strict curriculum, Foy searches for those elements of music that drive her students to learn, and emphasizes those in her lessons. Above all, Foy teaches effective learning, with focus on fundamentals and exploration. “I’m always like, ‘Expand, expand, expand!’” says Foy. “I try to emphasize playing in time. I teach them how to read music and to play dynamically.” Foy is the head drum instructor at the Rock n’ Roll Camp for Girls, where she helps aspiring musicians create original music. She then brings those lessons back for her other students in an effort to prepare them for playing in bands.

Speaking of bands, there’s a good chance that you may have heard Foy playing at any one of our local venues. She leads Strong Words, playing guitar and singing. The band is the culmination of Foy’s experience in many bands you might know, like The Future of the Ghost and Browser. Foy manages her band with a selfless attitude. “I want it to be about other people,” she says. “If you’re a writer or a painter, you can just be on your own. But if you’re playing music, you’re playing with three other people, so there has to be selflessness in what you’re doing.” Strong Words use rich emotional sounds that remind me of The War on Drugs—full of groove and feel-good riffs. The band’s multifaceted style is exactly what I’d expect from Foy. “Any time I’m growing as a musician, it directs Strong Words,” says Foy, and listening to the band’s progression from album to album, it’s clear that Foy has been growing a lot these past few years.

Strong Words released an album in January, and they’re eager to continue sharing it with Salt Lake City. Keep an ear out for them on SLUG Soundwaves, at your favorite local spots or opening for your go-to national acts. Foy is pushing her musical career every day, constantly growing and helping those around her to do the same. If you’re trying to do some of that musical growth yourself, Foy is ready to set you off in the right direction. Email her at cmfoy29@gmail.com and visit her website, facebook.com/cathyfoymusic, for more info about lessons, and check out Strong Words on Bandcamp at strongwords.bandcamp.com for some killer tunes.