00:00 / 18:49
Spotify Stitcher
RSS Feed
Share
Link
Embed
Tolchock Trio, the group best known for being a performing contradiction by playing as a quartet, are finally calling it quits, three years after everyone already thought they did. However, they did accomplish two things most bands never do: They made more than two albums and stayed together longer than 18 months … So that’s something. 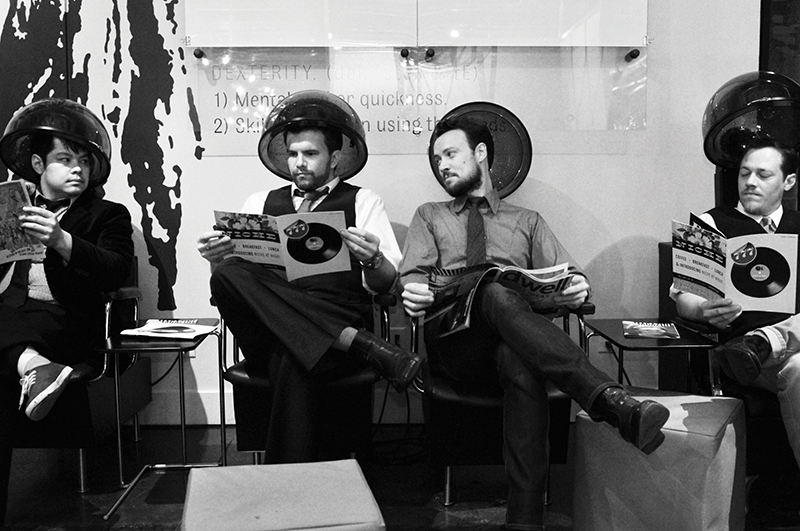 Tolchock Trio, the group best known for being a performing contradiction by playing as a quartet, are finally calling it quits, three years after everyone already thought they did. However, they did accomplish two things most bands never do: They made more than two albums and stayed together longer than 18 months … So that’s something.

Tolchock Trio stood as one of the most influential and constantly rocking SLC bands from the ’00s, or 2000s, or whatever you call the first decade of this century. The original lineup did indeed consist of a trio, featuring Oliver Lewis on guitar, Ryan Fedor on bass and Dan Thomas on drums. That quickly ended with a revolving door of additions including Nate Paxman, Eric Jensen (who appears on their first album), Jeremy Smith (who also served as their record producer and engineer for the first two records), Chad Murphy (who appears on the group’s third album), and finally, Tommy Nguyen, who came on board in 2009.
Their discography, while not the usual length for a band over a decade old, has held up well over the years, and, to be honest, sounds rather refined, having been done in actual studios. The group produced three albums in total: 2003’s Hello Bird, 2005’s Ghosts Don’t Have Bones and the critically acclaimed, 2008 album Abalone Skeletone—one of the few to be played frequently on KRCL for the first year of its release.
A milestone moment for the band was being one of the first to have an underage member (Nyugen) play outside the venue while the others rocked on at the now-dead Zephyr. Another badge of honor was being able to stay together for so long and actually act like professional musicians. The band has always boldly experimented with lineup changes, yet they broke the mold by being a standard “local band” who refused the stereotype of disbanding shortly after becoming popular.
The group also has the distinction of being one of the few local bands to open for a national band who has been overplayed on every radio station across the country—in this case, it was Weezer. The band got 45 minutes to “wow” an audience just starting to pour into the arena, and then enjoyed a well-earned rest in their dressing room, which turned out to be the locker-room shower for visiting hockey teams. The “trio” managed to steal booze and a couple games of foosball from Weezer before the latter went to lipsync their latest album onstage. We would like to believe that Rivers Cuomo himself proclaimed in the dank halls of the former E Center, “Damn, they play a good game.”
Since 2009, the band has always been rumored to be working on “something new,” and even joined Fedor’s Ex-Umbrella Records after he brought it back from the dead, but weren’t able to produce anything for the label. Alas, whatever fourth album was in the works may never see the light of day. The group recently expanded to a fifth member in SLC’s legendary David Payne, completely destroying the hopes of whatever audience was patiently awaiting any kind of real “trio” to return, but instead got to hear the theremin skills from one of the state’s most accomplished musicians.
The deathnail of the band came in the form of a departure when Thomas announced he was leaving for Los Angeles to work with the Joshua Payne Orchestra (brother of David Payne) and conquer the thriving nu-jazz market in a city of people who tip with $100 bills.
“I don’t think any of us have thought that much about the future. It’s been a busy year, but Tolchock as a band is over until Coachella offers us a million bucks,” said Thomas, as he sped away in his freshly purchased VW conversion van headed west.
While this may put an end to the “trio,” the surviving members can still be found in various projects, including The Pentagraham Crackers (Fedor) and the Salt Lake Electric Ensemble (Fedor, Lewis), continuing to influence the local music scene without a very tall drummer.
When asked about the future, Fedor seemed mildly optimistic about their future endeavors: “I plan on doing as much fishing as possible, maybe playing some music, too,” he says. He will be looking to conquer the growing restaurant market in SLC as the assistant manager at Eva, Lewis will be competing against him with his brother, Charlie, in the Lewis Bros Food Truck, Nguyen will continue his training as a master sushi chef at Takashi, and Dave Payne will continue to amass video games, work on his new mansion and try to join every band in SLC.
It goes without saying: Tolchock Trio will be missed immensely. Their power guitars and little-to-no nonsense style made them a standout on the rock end of the Utah musical spectrum. We can’t wait until three of the members decide to buy a drum machine and reform as a synth-rock band under the moniker Deltoid Duo. –Gavin Sheehan
Photos: