SLUG Mag Soundwaves
Episode #392 – Homephone
00:00 / 17:29
Spotify Stitcher
RSS Feed
Share
Link
Embed
Beginning with 2008’s Meanderthal and continuing with the band’s newest release, Harmonicraft, Torche has steadily written material that has more in common with Led Zeppelin than with Black Sabbath. “We get a lot of shit for not being as ‘heavy’ as we used to be,” says drummer Rick Smith. "Not everyone is supposed to like your band.” 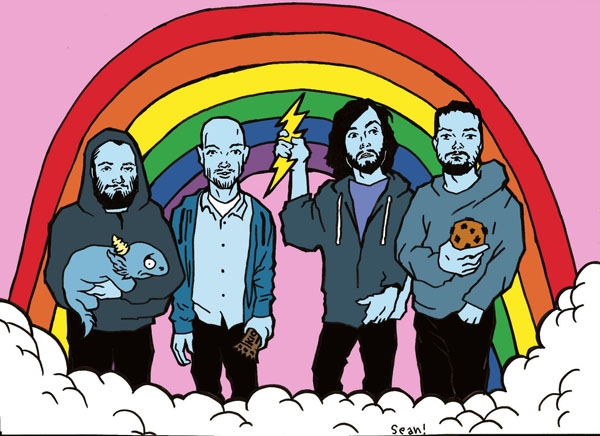 At the time of this interview, Torche’s drummer, Rick Smith, is in the process of moving and essentially becoming homeless. “I’m trying to float as long as I can,” he says. “I’m hoping to not have to find another place until closer to the holiday season, when I’m less busy.”  Smith currently resides in Gainesville, Florida, and the rest of the band is somewhat scattered—guitarist/vocalist Steve Brooks and guitarist/vocalist Andrew Elstner both reside in Atlanta, Georgia, and bassist Jonathan Nuñez still resides in Miami, where the band was formed in 2004. Torche begins a three-and-a-half week jaunt with Corrosion of Conformity on June 1 to promote their latest full-length release, Harmonicraft, followed by Metallica’s Orion Music Festival in New Jersey, alongside such bands as Arctic Monkeys, Best Coast, Modest Mouse and Metallica. Following that is the 305 Fest in Miami with an insane lineup of bands that includes The Bastard Noise, Dropdead, Noothgrush, Iron Lung and many others, and there is also a European tour in the works. As if the band’s summer schedule wasn’t crazy enough already, Smith is also in the bands Post Teens and Shitstorm (with fellow Torche member Nuñez), so it seems that this is the perfect time for him to forego traditional living in favor of the nomadic lifestyle that is seemingly essential to a band that tours almost ceaselessly.

Torche’s music has definitely evolved since the band’s self-titled album back in 2005. That release seemed to be somewhat of a logical extension of the bands that members of Torche had previously been in, such as the absolutely amazing Cavity and Floor. Beginning with 2008’s Meanderthal and continuing with the band’s newest release, Harmonicraft, which was self produced by the band and mixed by Kurt Ballou (of Converge fame) at GodCity Studios in Massachusetts, Torche has steadily written material that has more in common with Led Zeppelin than with Black Sabbath.

“We get a lot of shit for not being as ‘heavy’ as we used to be,” says Smith, “but the funny thing is that Harmonicraft has more songs tuned to drop-A than Meanderthal did.” He goes on to explain that he feels like the age demographic—younger kids, specifically—and some people’s fickle musical tastes cause the band’s fans to not be as appreciative as they could be of the band’s entire catalog. “It seems like a lot of young kids are told by older folks to listen to specific albums,” Smith explains. In his estimation, kids are being told things like, “You should listen to this album because it kicks ass, but don’t listen to those other albums because they aren’t as heavy.” Torche played to an almost strictly metal crowd for so long that some people aren’t as accepting of the maturation of the band, specifically regarding song structure, melodies and presentation. Of course, everyone is entitled to their own opinion, but Smith sees closed-mindedness as being a direct hindrance to people discovering and enjoying Torche’s releases. He concedes that this isn’t meant as a blanket statement or an indictment of closed-mindedness directed at any specific crowd—he explains his standpoint almost as a lament as opposed to an accusation aimed at any group of people.

“I think the idea of playing slower was easier than actually doing it,” Smith says about his transition from playing in metal/grindcore bands, such as Shitstorm, to playing in Torche. “You can listen to the last track on the first [self-titled] Torche record, and you can hear how stiff the drumming is.” Smith is nothing if not his own worst critic, but he revels in being what he calls a “rock drummer” as opposed to a “metal drummer” these days. “Playing with good musicians—dudes who know how to play really well—it really makes me step up my game, and it’s taught me to play more tastefully,” he says. Smith goes on to further praise his bandmates, and explains that Torche is a “live band,” stating that the band’s full-length releases are written and recorded very quickly, so more time can be spent touring.

Smith cites the band’s 2008 tour with Japanese drone-experimentalists Boris in support of Meanderthal as somewhat of a launching pad for the band. “I think after that tour is when people really began to take notice of Torche, especially as a live band,” Smith says. “I think that’s the most touring I’ve done in a single year, easily.” Smith estimates that Torche was out for over 150 days in 2008. “I remember being gone pretty consistently for about half of 2008,” he remembers. “We did two tours in Europe, three or four US tours, and a tour in Japan. We’re usually received pretty well overseas, and they take really good care of us in Europe,” Smith says. “We play to roughly the same size crowds in Europe as we do in the US, but the Europeans are really on top of their shit, in terms of hospitality,” he says. “In the States, we’re lucky to get some beer, water and towels, whereas in Europe they have dinner set up for you, and generally have hotels or some other form of lodging taken care of for you.”

Eventually, our discussion circles around to Torche’s latest full-length release, Harmonicraft. “I couldn’t be happier about the record,” Smith says. “I mean, I love having a new record out, usually, and this one is especially awesome.” When the topic of reviews is broached, Smith has a very honest and engaging opinion: “Most of the reception we’ve been getting has been positive, but even the negative reviews have their place. Not everyone is supposed to like your band,” he says. Musicians, take note, as truer words were never spoken. “I just think it’s cool having so many people talk about the record,” he continues. “We touch so many different influences on this record that every single review highlights different tracks as the standouts.” Smith relishes the fact that Torche relies on classic rock hooks, albeit written and performed on a somewhat heavier level. He doesn’t like the band being referred to as any sort of “pop” band, and he hopes that the band can continue to produce music of this sort. “As of right now, I don’t see us running out of steam or running out of ideas any time soon,” he says. “As a matter of fact, I feel like we’re just kind of hitting our stride, and I think that we’re going to be able to continue to mature and evolve as a band for the foreseeable future.” Summarizing, Smith simply hopes that the band will be able to enjoy the longevity and productivity that the bands who have influenced Torche, such as the Melvins, have experienced.

Torche deserves your attention. They are thoroughly dedicated to what they do, and what they do is knock people on their asses with extremely catchy, loud and energetic music. Check them out with the legendary Corrosion of Conformity at the Urban Lounge on Friday, June 15.