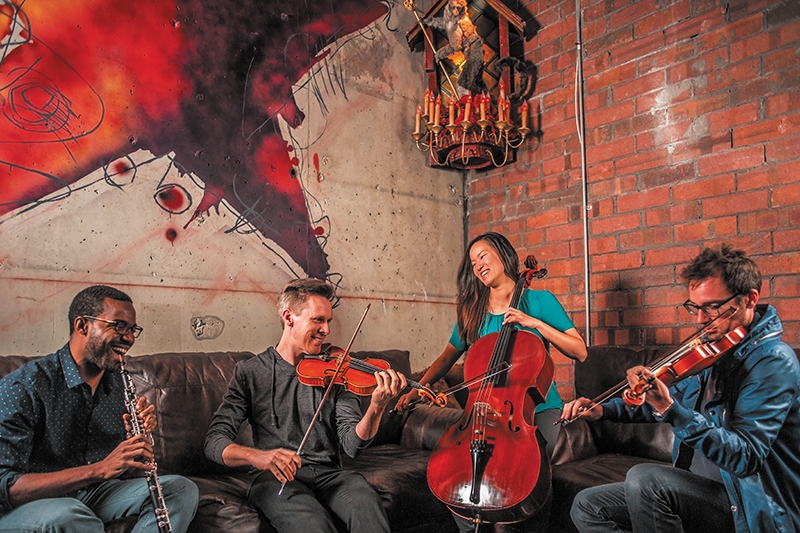 Transcending Stages with David Porter & Musicians of the Utah Symphony

There is a good deal of music that tries to transcend traditional elements in order to breathe life into a genre that has become set in its ways. None do it better than MOTUS—Musicians of the Utah Symphony. MOTUS are currently transcending the concert hall filled with tuxedos and evening dresses for a more casual environment, and with an upcoming performance at The Red Door on Feb. 28, there has never been a better time to expose yourself to classical music. MOTUS founder David Porter is a violinist for the Utah Symphony who has been playing the violin since he was 5 years old. Porter wanted to offer classical music to a new kind of audience, and says, “I don’t want classical music to seem out of reach, or for people to feel it is too complicated to approach.” Thus, he started MOTUS—a revolving group of professional classical musicians who have taken their repertoire of classical music pieces to the Salt Lake bar scene. MOTUS are a combination of violins, violas and woodwinds, all amplified in order to awaken the traditional spirit of classical music

During a recent performance at O’Shucks in November, MOTUS performed an excerpt from Dvorak’s “American String Quartet,” which received a phenomenal reaction from the audience. When asked about the performance, Porter responded by saying that he “couldn’t have been more impressed by the turnout. There were so many people, and the reaction was amazing.”

The recent event at O’Shucks and an upcoming performance at The Red Door have broken down the wall between neophytes and classic music. MOTUS are more than an experiment in art—this is actually classical music returning to its roots. The concept of concert halls and fine attire is a very 20th Century concept. Porter says, “Often, people feel that classical music is unapproachable or that it is something strictly for a certain class.” Nothing could be further from the truth. Classical music is about pain, loss and triumph, and builds a soundtrack that reflects its composers’ darkest times and most glorious achievements. Porter went into great detail discussing the tragic lives of classical greats such as “Beethoven and his struggle being a composer after losing his hearing, or Franz Schubert, who died at 31 from typhoid fever,” he says. MOTUS do what artists of today do: take real-world experiences and give them an added dimension by performing music

In their prime, classical composers like Beethoven, Mozart and Bach were truly rock stars in Europe, performing in small venues and engaging the audience to riotous applause. Often, the downside of performing in a traditional concert hall is all the preconceptions that come along with it: clap at the right moment, don’t cheer, and sit quietly and listen. In addition to being heard, the work of these composers is also meant to be enjoyed—a bar setting may just be a uniquely perfect fit.

It seems surreal, like a scene from a well-scripted movie, but this is the reality Porter and MOTUS have created. At the upcoming Red Door performance, MOTUS will have cards with the URL of their new website, which will provide further information about the pieces and compositions they’ll play at The Red Door, such as “Opus 131.” Porter says, “This is a great way to offer something new and insightful on the type of music we are presenting. It will also allow those who are interested a way to find the composition they enjoy and further seek out similar music.” After MOTUS perform at The Red Door, their aspirations for 2015 are large. MOTUS hope to perform some sort of large-scale event with a full stage, full-size piano and amplified instruments. Porter also says that he “hopes to play in any city that will welcome a new take on classical.” “MOTUS in Park City” has a certain ring to it, and the moment we discussed other cities, I could not help but hope for the group’s further success.

Classical music has been alive and well for well over 600 years, and for good reason. Regardless of whether it’s Beethoven’s “Opus 131” or Schubert’s “Death and The Maiden” (both of which MOTUS will perform at The Red Door), this music was meant to evoke emotion and curiosity about culture and society. MOTUS have taken an old-school classical mindset and have brought it to the modern era while maintaining tradition and technique. Rather than thinking of classical music as a formal, high-society event, look at it as if you were about to hear the soundtrack to a moment in one individual’s life. MOTUS are doing what all great artists do: taking what they have mastered and giving it to a new audience. Next time you are at a bar and see a group with violins and other orchestra instruments, pull up a seat, grab a drink, and be prepared to hear classical music in a very new yet very traditional way.

For further information, check out MOTUS at musiciansutahsymphony.com.