I had the chance to sit down and chat with Jahan Yousaf, the older of the two feisty sisters who provide lyrics and energy to Krewella, on Sept. 24, the day their debut album, Get Wet, was released.

Trolling with Style: An Interview with Krewella 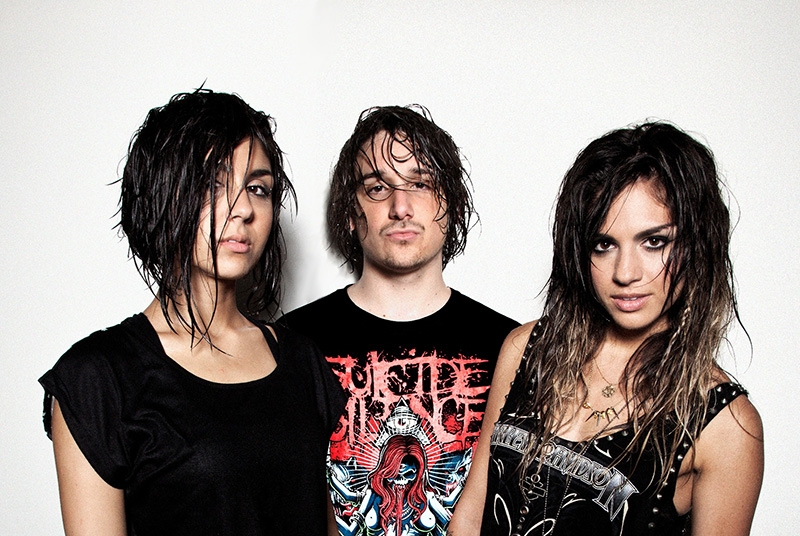 In the last year and a half Chicago–based trio, Krewella (Jahan and Yasmine Yousaf and Kris “Rain Man” Trindl), have gone from up-and-coming DJs to the next biggest thing in dance music. Since releasing their first EP, Play Hard, they’ve shot to the top of the dance charts and have played festivals such as Miami’s famous Ultra Music Festival and the Electric Daisy Carnival around America. For those of you who may not be familiar with their music, you may have heard their hit single “Alive” on the radio in the last few months. I had the chance to sit down and chat with Jahan Yousaf, the older of the two feisty sisters who provide lyrics and energy to Krewella, on Sept. 24, the day their debut album, Get Wet, was released.

SLUG: Get Wet has already reached Number 3 on the iTunes top new album charts, how does it feel to have literally blown up overnight?
Jahan: In a very small community I would call it blowing up, it’s really all because of our fans. It’s an amazing feeling to see something that we’ve been working on for two years reach so many people.

SLUG: Were you surprised that the album went straight to the top album charts and not just the top dance charts?
Jahan: Normally it’s been dance charts that we’ve had a lot of luck with as far as charting goes, so it’s so cool to be up there with Kings of Leon and Drake, who is Number One right now, and Cher, who is a legend.

SLUG: You collaborated with Gareth Emery on a track on Get Wet, how did that collaboration come to be and what was that creative process like since his musical style is different from yours?
Jahan: That is “Like Thunder,” which is a bonus track, and he actually reached out to us after he heard our EP Play Hard, and he wanted to do a collaboration. He sent us an instrumental demo and asked us to write over it. It took months to finally come together just because he’s traveling all the time, but we were finally in LA at the same time and got to go into his studio to work on the beat more.

SLUG: How were you able to move forward from making music as a hobby to making music as a profession? Was it ever frustrating?
Jahan: We were juggling school and paying jobs at the same time we were doing Krewella. Between the three things, we decided to pick the one thing we were most passionate about, which for all three of us was Krewella, so on June 8, 2010, we decided to quit our jobs and drop out of school and dedicate ourselves to Krewella. We have that number tattooed on our neck because you can never turn back once you tattoo your neck.

SLUG: I know Kris works on the production side of the music while you and your sister write the lyrics, but do the three of you ever produce together? If so, how does that process differ from working separately? Do your tastes mesh easily?
Jahan: We all collaborate together. Sometimes Kris will come in and change some of our melodies or lyrics. Sometimes we work in the studio with Kris, it’s a very collaborative process and our hands are on everything. Yasmine and I almost always agree on everything [sound wise] and we usually just disagree with Kris. Sometimes there will be a passionate argument in the studio, but we always end up going with our gut.

SLUG: Your song “Alive” that you released just last summer has had such a huge response and was recently remixed by Hardwell. What did achieving that level of success mean to you at the time?
Jahan: It’s amazing because if you look back to the night “Alive” hit the radio, it was New Year’s Eve 2011 and we were lost in Chicago. We weren’t booked for a show and we were just drinking cheap champagne. It’s so crazy to look back on that two years later and see thousands of people singing along to the song at a show.

SLUG: Do you have any crazy stories from shows you’ve done in the past? You openly party and I’ve seen too many pictures of you crowd surfing to count, so you must have some fun experiences.
Jahan: My favorite thing is seeing people in wheelchairs crowd surfing because that shows that no matter what physical condition you’re in, dance music can make you rise above your condition. That was one of my favorite moments at a show in Texas.

SLUG: How does coming from Chicago contribute to your musical style? You’ve said in the past that you come from the environment that your fans do. Were you ravers in high school?
Jahan: Chicago is huge for house music, but we never really went out—we maybe had a two-week stretch of clubbing. The three of us really just stayed in and worked on our music, but once we started playing shows we played at these little dive metal bars that had a lot of dubstep and hard dance music.

SLUG: I can tell from the lyrics in the songs on your new album that the music is personal. What are some of your favorite tracks and how long have you been working on the entire process?
Jahan: The entire project has been about two years. One of my favorites is “Human,” which is more of a ballad and has more of a chillstep vibe to it. We spent so much time crafting the lyrics, but that song specifically took one day. “Enjoy the Ride” is another song that took one day to write, but the production took months. Those are probably two of my favorites.

SLUG: You and your sister are some of the only well known women in the electronic music industry. How does it feel to know you’re one of the first groups of women to make it huge as a DJ?
Jahan: It’s an honor, but Yasmine and I don’t like to be treated special because we’re women. We see ourselves as people, and it doesn’t matter if you’re a boy or a girl, because it’s all about work ethic. I think a lot of girls aren’t pursuing this because they’re not willing to dedicate themselves and abandon things like their social lives and fashion and partying—that’s really what it takes to be successful in the electronic dance music scene.

Krewella’s new album, Get Wet, which was released Tuesday, Sept. 24, is a thrilling adrenaline rush of a dance album with catchy pop elements to the lyrics. If I were casually describing my liking to this album to my friends, I would probably say something along the lines of, “Krewella’s new album is fucking sick, oh my god,” but I guess I have to elaborate a bit more here. The album includes hits from their EP, such as “Killin’ It” and “Alive,” as well as a few of their more recent chart toppers, “Live For The Night” and “We Go Down.” Krewella keeps their signature sound of upbeat lyrics with wicked dance drops that will melt your face (I’m sure you know what I mean by that if you’re an EDM junkie). However, the album also shows a different, slower tempo side to their musical styles, with songs like “Human” and “Pass The Love Around.” Two of my personal favorite tracks on the album were “Ring of Fire,” an angsty dub track that slows into a trap tempo after the drop and just sort of makes you want to scream and toss your head back and forth, as well as “This Is Not The End” featuring Pegboard Nerds, an up-tempo dance track with heavy electronic drops that blend their pop star lyrics and grungy style into something that will attract every type of EDM fan.

You can catch Krewella at The Great Saltair in just a few weeks at this year’s Get Freaky on October 12. Until then, don’t forget to get their album online at Krewella.net or follow them on Twitter.