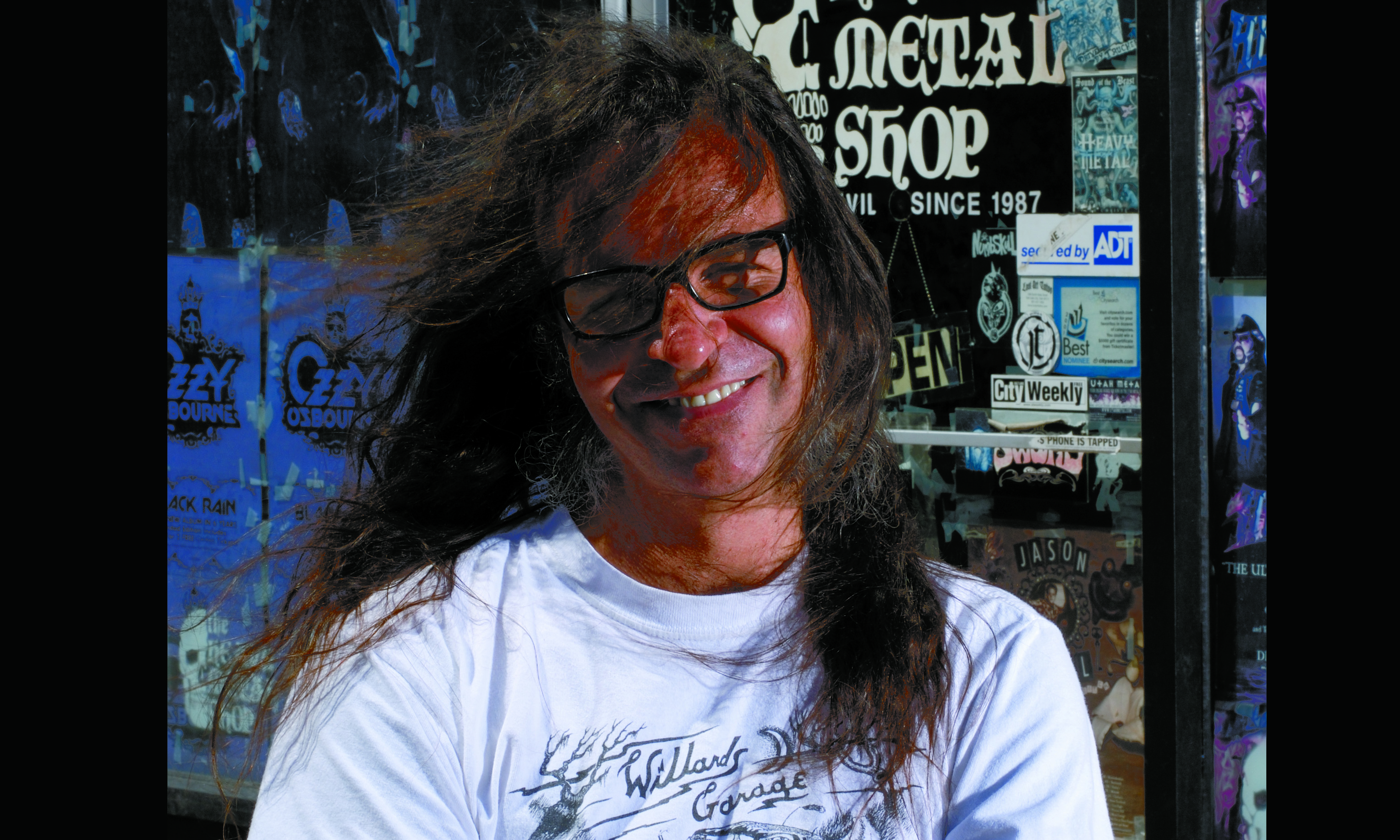 Two Decades of Peddlin’ Evil: A History of The Heavy Metal Shop

“I imagine there will be somebody that will want to take it over,” said Kevin Kirk, owner of the Heavy Metal Shop. “I never really put that much thought into it: it is really cool I’m still doing it. I’m getting pretty old now; I’m 45—look at Mick Jagger, though. I’ll do it until I can’t. Why not?”

The HMS opened its doors in 1987 in the conservative SLC suburb of Sandy. Kevin was able to open the store after the initial investment in his first store, CD World, tripled in six months.

“My love of music was my inspiration to open a record store. Initially I carried all types of music, but it made sense to specialize, since I was into the heavier stuff. I wasn’t very good at selling jazz to yuppies anyway—especially with Slayer blaring in the background,” Kevin jokes.

Two years later, in 1989, the shop moved into the heart of Sugarhouse (remember the giant Slayer sign?), next to the Blue Boutique. Kevin says that the move from Sandy to Sugarhouse was easy because it was like he was moving up in the world. Ten years later, a new landlord took over the building and forced the shop to pack up within 30 days. Kevin wound up moving everything to his house and stayed closed for over a month. Kevin says it felt strange not having the actual shop. He sold some stuff online but it didn’t feel the same. “I loved the interaction with people, and loved talking with them face to face, discovering new music and turning people onto new music or just talking about old music. I kept running into my customers, and they were missing the shop as well.” The HMS’s next location was in the Redman Building, but after two short years the building was destined to become condos, and the shop moved to its downtown location in Exchange Place. Kevin says the current location reminds him of the Sugarhouse store, in both size and feeling.

The now infamous half-skull logo was designed by a patron of Kevin’s original record store. The designer was more of a, “jazz, yuppie type guy,” said Kevin. “The first logo wasn’t actually a skull—It was a half of a record.” Not satisfied with the initial design, Kevin asked for something more metal. The designer came back with the current logo. “It was just luck really,” says Kevin. As payment, Kevin gave him some “non-metal” music that didn’t fit the store’s new direction.

Selling music isn’t the most profitable part of the Heavy Metal Shop. Kevin’s merchandise (hoodies, t-shirts, cozies, underwear, mugs, etc.) are hot items for any self-respecting rocker or Hessian. This is true not only in Utah, but around the globe. The gear has had help from Tom Araya, Dave Mustaine and other famous metal icons who sported the clothing in national videos and magazines. The shop functions in a similar way as touring bands, where selling merchandise is more lucrative than selling their actual CDs. “It wasn’t really a plan to market my clothing; when I first did shirts it would be my family and friends wearing my logo to advertise for the shop. We started selling more and more. Now you see the shirts and sweatshirts all over. It’s really cool. I feel a real comradery with these people, like they are part of the family; it makes me feel good.” Kevin had some special shirts made to celebrate the shop’s 20th anniversary. There is also a new logo from artist Wes Freed, known mostly for his Drive-By-Truckers cover art.

Another big part of the Heavy Metal Shop experience is its history of in-store band appearances. The shop’s sordid history of in-store music performances include Dark Angel, Testament, COC, Fight (of Rob Halford fame), Primus, The Deftones, The Supersuckers, Prong, System of a Down, Lamb of God, and countless others. During one of Slayer’s multiple appearances the street was lined with fans and full on bonfires. The police were called in to help handle the crowd. Kevin remembers that Tom Araya refused to stop signing autographs and meeting fans until the line was completely gone. He stayed well into the early hours of the morning. I recall going to a Gwar in-store and witnessing a clumsy (or intoxicated) Oderous go to sit down, miss the chair completely and fly back into the CD racks. I was also witness to Throwrag and Red Planet playing full electric sets on the shop’s makeshift stage.

There is no question that the mighty shop is destined to be a part of Utah culture for years to come. Its influence can be seen on the streets, at concerts (for which you can buy tickets at the shop), and just about anywhere else here and abroad where people brandish that famous half-skull logo. Kirk is obviously proud of his shop, and with loyal customers that keep coming back, he has good reason to be. He says that, just like many of his customers, he feels at home in the shop. It is a familiar and friendly place where fans of metal culture can feel at home.