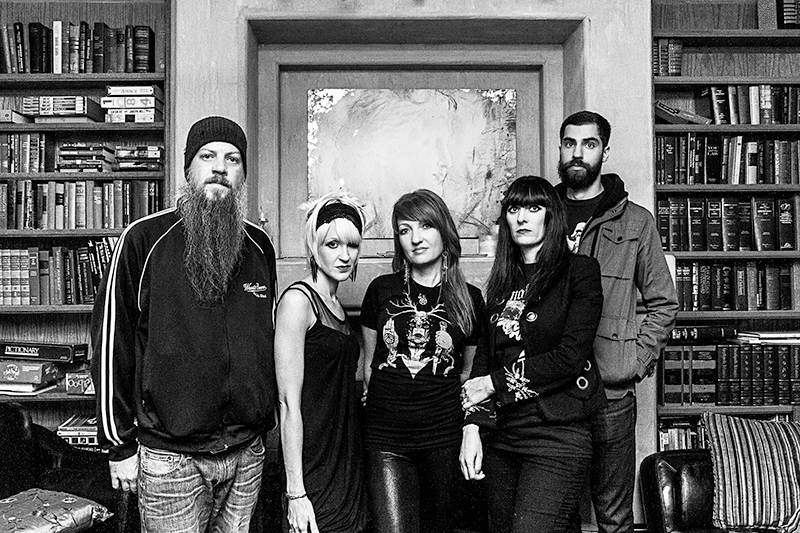 Under the Rose: Thinking About Death with SubRosa

Over the last five years, SubRosa has grown into one of Salt Lake City’s better-known metal bands, and with the release of More Constant Than The Gods on Profound Lore Sept. 17, the band has shown that their high profile is well-earned. This third full-length release shows a startling amount of growth in lyrical and musical quality from No Help For The Mighty Ones. Guitarist Rebecca Vernon calls it, “By far, the most grueling album I’ve ever put together,” adding that “it was a lot of hard work, but it was worth it.” The rest of the band heartily agreed with her, seeming content to relax in the wake of its release. Violinist Kim Pack reflected on the early stages of songwriting: “It was so hard for me. We were going through all these phases where our stuff just sounded awful. I felt personally challenged to push myself and get over my personal fears.” she says.

In a sense, this difficulty in songwriting also arose from the personal nature of the album’s theme. Vernon’s mother passed away prior to the songwriting stage of the album, and she decided to make this album a reflection on the nature of death itself. “I started seeing death in a new way. I saw how horrible life would be without it, how absolutely unbearable life would be without death,” she says. “Death really is this noble thing, this pure thing. Part of the reason it tastes so sweet is because you really have to hit rock bottom to truly appreciate it.” The other members of the band expressed that part of the difficulty of writing this album came from trying to “let go” of a style they had played for the last five years. Violinist Sarah Pendleton felt that part of letting go was making room for new creative avenues to grow. She says, “I wanted to remain free and away from No Help For The Mighty Ones. I didn’t want to repeat myself and wanted to make sure that I was growing musically.”
Another theme the band brought to this album is one that’s quite familiar—an analysis of spirituality and religion. Bassist Christian Creek observed that our culture values ritual and assertiveness over genuine spirituality. “People go through the motions without thinking about what it actually means because they’ve been told to,” he says. “They might get a sense of fullness and worth, but they’re close with their tongues and not with their hearts.” The album isn’t anti-religion in any way, but it takes a much-needed moment to consider the social impact of fundamentalist religious views on our culture. “We live in a world where there are always powers greater than us, and we feel so small,” says Pack.  “I think it’s about being empowered, having a voice and resisting the patterns that have been set into motion.”
Metal bands have always existed at the margins of popular culture, and the genre has often served as a counterpoint and criticism of dominant social power structures. Having a strong metal scene has been a positive influence in Salt Lake City in particular. “We have an incredible metal scene. I think it rivals just about anywhere else in the world,” says drummer Andy Patterson, who has been heavily involved with the scene for a number of years. He says that we have avoided the stereotype of an archetypal “Salt Lake City sound” and instead embraced a more varied and eclectic profusion of genres. “We really do have the most vibrant group of people playing music,” says Pendleton with a smile. “They’re all really good, too.”
Patterson’s involvement with SubRosa started when he filled in for Crucialfest 2012 and culminated with his current status as a permanent member of the band. He’s known for his recording prowess and fantastic beard. He stepped up to the task of writing and recording with an altogether different approach. “I feel a little bad because my experience with writing the record was easy,” he says with a hearty chuckle. “They did a lot of the work at home. My job is to be, y’know, a tasty drummer. So I wasn’t involved in most of the legwork.” Yet, the rest of the band disagreed, saying his professional input on the songwriting process was invaluable, helping More Constant Than The Gods to realize its full potential.
The band plans to set up a series of short tours through the States, kicking off with a one-week tour with Samothrace through California. They have also entered their names into consideration for Roadburn and Maryland Deathfest, hoping to get involved in a larger national-scale metal festival. “We just want to keep people excited about the new album, and keep touring to support it,” says Patterson. Vernon has also expressed an interest in filming a music video for the new album. “It’s something I’ve always thought would be cool to do because I always see images when I hear our music,” she says.
Ultimately, SubRosa’s plans are to keep writing new albums and pushing the boundaries of their creativity. As More Constant Than The Gods has shown, the band is willing to reinvent itself—to try new approaches to songwriting and to continue the legacy of incredible musical variety found in Salt Lake City.
Photos: