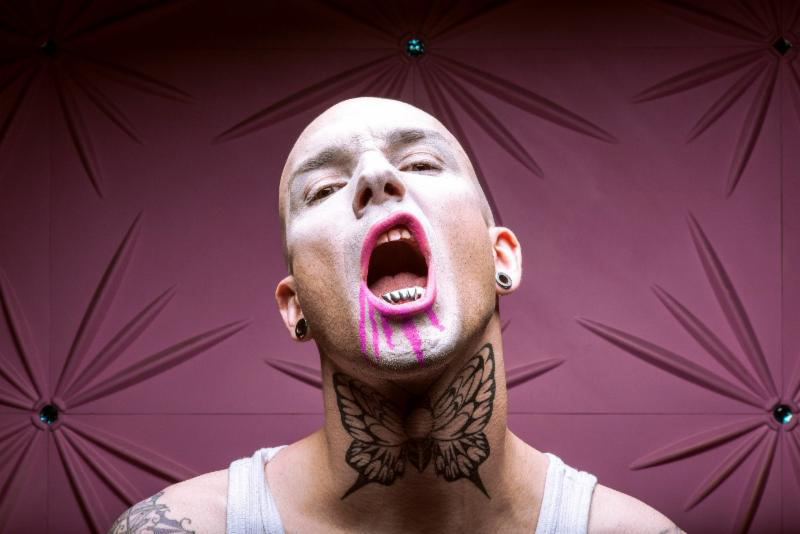 Physically, Graves underwent sinus surgery a few months ago, and it has opened up some options for him. He feels that his falsetto sounds better and he does not have to push as much, and his signature screaming is better because of the resultant head resonance. Graves still sounds like himself, only better. He is grateful he had the surgery because the sinus issues were impacting many areas of his life. Flying was one of those issues. He experienced extreme pain because he could not equalize the pressure in his sinuses due to the outside air pressure. The need to be out of this painful experience was dire in conjunction with the fact the he has recently moved to Europe.

Graves has recently moved to his wife’s homeland of Austria to support her in her career. He says, “Basically, I just follow her career around.” She received another job back home, and since Graves has the luxury of working wherever he pleases, they moved. All he needs to be creative is a computer and a place to work. He’s proud of her and supportive of her career. He says, “It’s a new adventure and I am stoked to go on it.”

“It is always good to continue to challenge yourself with change.”

Graves compares the change of pace from the busy Los Angeles area to the countryside of Austria as “Reverse Beverly Hillbillies.”  The village they moved to only has 1,100 inhabitants, and he has noticed that small-town politics are actually a thing that happens. It gives Graves space to be creative and gets him into a different headspace and cultural vibe. All of these things are very inspiring to him and he says, “It is always good to continue to challenge yourself with change.”

The change is not only in him and his location. The members of Aesthetic Perfection have also changed. His current bandmates are Elliot Berlin, who plays keyboards, bass and guitar, and Joe Letz on drums.

Graves has been in the business for a long time. He feels that being young and naïve may had something to do with it, but he previously believed that he could do it on his own and ran Aesthetic Perfection that way. Over the last couple of years, he has realized how dependent he is on other people to make progress with the band and has realized that a team is the best way to obtain long-term success. He says, “To be so egotistical to believe that you can do all of the things on your own, you are setting yourself up for failure.”

“It’s a new adventure and I am stoked to go on it.”

Berlin, Graves’ long-term colleague, is a fantastic multi-instrumentalist and a sound engineer by trade. He also has a positive attitude and a strong work ethic. Graves felt that it was an obvious choice to make it official and add him to the lineup.  After Tim Van Horn left the band, he turned to his old friend Letz to fill the bill. The former Combichrist drummer has also undergone change: He is sober, dedicated to his craft and has had a phenomenal career in the industry. This also seemed like an obvious choice to Graves. He says, “I have never really had an incarnation of the band where we all feel like we are firing on all cylinders and we are all headed towards the same destination.” He adds, “Everybody loves playing music, loves what they are doing and wants everybody to succeed and be happy.”

As for the creative process, when Graves writes, he is usually not conscious of what he is writing about. It just streams out of him. It is only toward the end where he starts putting the pieces together of what the song contains. “I have to decode my own songs most of the time to see what I am trying to express,” he says.

Graves has been processing many things from his childhood, and on the track “No Boys Allowed,” it shows. Here, Graves addresses some of the issues that he faced while dealing with the his emotionally abusive stepfather who was always putting pressure on him to be his vision of what a man should be.  “He was a football player, a body builder and I was just this skinny goth kid wearing makeup,” he says. “He hated it and would insult and threaten me, and I never felt like I was good enough.”

“Everybody loves playing music, loves what they are doing and wants everybody to succeed and be happy.”

Luckily, Graves did not conform to his step fathers masculine ideals and has found comfort in being who he is. Creativity often comes from uncomfortable places, but with it comes a powerful healing force. Graves is incredibly grateful to have a lot of people that support him and believe in him. He did not have it back then but showed the strength and pushed through it. He says, “I think it is a sign to other people that may be going through something similar, that it really can get better. You can get out of these situations.” Following Graves’ experience, if you are in an emotionally abusive situation because you are different, try to find a support group or community of people who think like you do and will love you for who you are. It’s really important and healing to have a support system in place. Sometimes life feels like you do not have an escape route, and these feelings can take you down a dark spiral of despair. There is a road out.

The lead single from Aesthetic Perfection’s new album, “Gods and Gold,” was a tough track for Graves. This was the first time he experimented with collaborating with other songwriters on an album. Many talented people contributed. Mick Kenny from Anaal Nathrakh played the first round of guitars, Jinxx from Black Veil Brides played the second round of guitars and then, at the last minute, Rammstein guitarist Richard Z. Kruspe brought new melodies on board and put the finishing touches on the polished version  of the track that is on the album today.  This “labor of love” took nearly a year to complete, and all of the time and effort certainly shows with energy the song contains. Graves reiterates that he can’t do all of these things by himself and says, “Working with talented people is a blessing.”

“I think it is a sign to other people that may be going through something similar, that it really can get better.”

The video for “Gods and Gold” was directed by none other than the talented Clint Carney from the band System Syn. Carney is mostly making movies these days and has made a couple feature-length films. His movie Dry Blood was just released on Amazon Prime. Carney and Graves are longtime friends as well. Graves says, “It is just crazy to see where our lives have gone and the paths we have taken.”  Graves turned over the creative reigns to Carney’s visual skills. The video-production team was loaded with just as much talent as the music track had. Graves said his part was just the actor in it, and the talented people around him made the video what it is.

As for the defined narrative of the video, Graves feels that art needs to be as subjective as possible. He says, “Everyone takes something different from it. What makes art so powerful is our individual ability to read our own story and have that speak for us.” Graves wanted to address things as he sees problematic in human nature—greed, vanity, loneliness and desperation are just some of the issues the characters he played expressed. He wants to distill raw emotion and put it to music or express it with video.

“What makes art so powerful is our individual ability to read our own story and have that speak for us.”

The title of the band’s new album, Into the Black, can mean two things: In retail, it means profitable gain, and the band has had great success recently. He has added great musicians to Aesthetic Perfection, developed a great a great network and has recently gone independent, which helps him both artistically and financially.  The second meaning speaks to Graves’ dark mental breakdown. Graves could not understand why this happened, because all of the things in life that he wants are coming true, and he has so many things to be thankful for. “It is my exploration of the darkness that I felt in my life at a time when my life should have been great,” he says.

The Dark Arts Festival of Utah takes place at Area 51 from Oct. 11–Oct. 13. This three-day festival is packed with music, art, dancing and fashion. Indulge in the exotic darkness of your mind and express your individuality with others like you. Save yourself a few bucks and buy tickets in advance and don’t forget to Uber or Lyft to party safely.