In a simple sense, OM is a band that makes and plays music. A straight dissection of the band’s musical elements may mislead the interpreter. The subject matter isn’t direct and the music fits into realms from traditional rock to experimental, drone and world music. “Things in my life are incredibly inspiring. They’re a hundred times more powerful than some shitty album from some shitty band," says Al Cisneros. 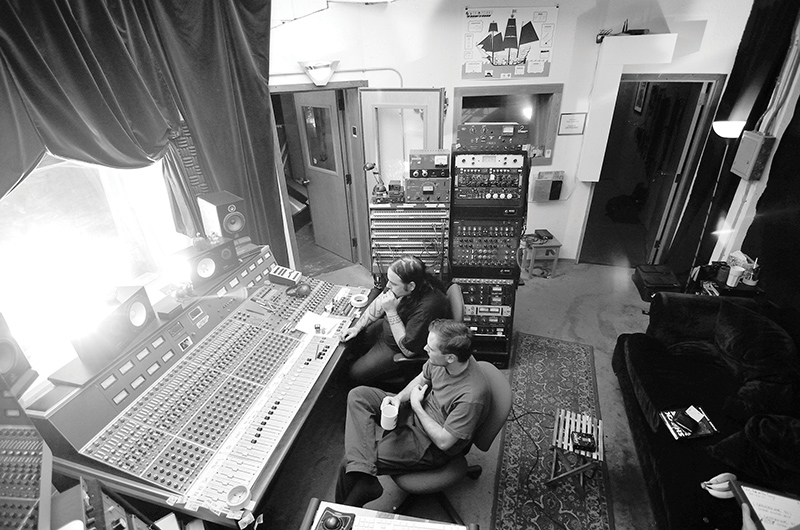 The transcendent and heavy sounds of OM will blare from Salt Lake City for the first time on Feb. 12 at The Urban Lounge. Photo: Jason Roeder

Talking to Al Cisneros, founding bassist and vocalist of OM, brought back memories of my conversation with him seven years ago, which helped redirect the way I understand music. I talked to Cisneros in the early stages of OM for SLUG in 2006 (June, Issue #210), and his description of OM’s music resonated with me above all else from that interview: “It’s just life with the amplifier hooked up … an extension of what you already feel.” Personally, my life is a shadow of what it was seven years ago. I broached the subject of time and life with Cisneros and asked how life has been for him since then. “That’s heavy. I don’t know—I think it’s constant. It’s we who evolve. Life is like a substrate. It’s there continually, sustained constantly. I don’t think life can be bad or good. It’s life—it’s consciousness,” he said. OM branched out from the disbanding of notorious stoner/doom trio Sleep—who have since reunited without original drummer (and former OM drummer) Chris Hakius.

In a simple sense, OM is a band that makes and plays music. Like life, music is not a black and white, or even a grey narrative. It’s like looking into a multi-dimensional prism, and, on any given day, whatever light exists, you will see something a bit different through that prism. The musical sense of OM has been planted strongly in intense rhythms—the core instruments being bass guitar, vocals and drums—traversing typical song structures with a sole intent on patterns. “Om,” after all, is a Hindu syllable for the natural vibration of the universe.

Sonically and lyrically, OM has always been a spiritually driven band, as evidenced by “At Giza,” the first song from their second album, Conference of Birds, moving on with their third album, Pilgrimage, and playing a live set in Jerusalem that lasted over five hours. The very title of the band’s 2009 full-length God is Good, screams “Religion!” at first glance. But OM is far from pushing any form of “one-way” thinking. Their most recent album, Advaitic Songs, was released in 2012. It gets its title from a Hindu philosophy, Advaita Vedanta, and the album’s cover depicts John the Baptist. From a strictly secular point of view, it seems out of sorts. “In our lyrics, you can see that there is not one religion—it’s a combination of all these different approaches towards the goal of life from different parts of the world and different times in history. They’re different roads going to the same place,” said Cisneros.

Anyone can listen to OM and gather their own thoughts, but a straight dissection of the band’s musical elements may mislead the interpreter. The subject matter isn’t direct and the music fits into realms from traditional rock to experimental, drone and, as some folks are calling it, world music. “Things in my life are incredibly inspiring. They’re a hundred times more powerful than some shitty album from some shitty band. Like the lives of a saint and the lives of these great thinkers,” says Cisneros.

Cisneros said he started playing music because it’s what he wants to be doing to make the best of his life—and to evolve in his own forms of spirituality. Cisneros may have started musically in other thought spaces in regard to the content and style of Sleep, but OM, while at many times calm and almost trance-like, is heavy in matter and ideas of self discovery—looking at something from a point of view you may disagree with or find foreign. “There’s much higher inspiration than some shitty life problems being put into lyrics—like how most music is, talking about whatever and their stupid fucking life,” says Cisneros.
Cisneros has recently launched his own music label, Sinai, and released solo material with a 7” titled Dismas. He says he will continuously strive to create music outside of OM as a practice of his expressions and desire to help expand the senses of the current sound of OM.

Cisneros and drummer Emil Amos have enlisted the talents of Robert Aiki Aubrey Lowe (of Lichens and 90 Day Men), who adds more instruments and elements, layering and making Advaitic Songs a different listening experience recorded and live—definitely something new for OM. If you want more than a straight rehash of OM’s recorded work, attend their live performance, prepare for something different, and digest as you see fit. OM plays Salt Lake City on Feb. 12, at The Urban Lounge.