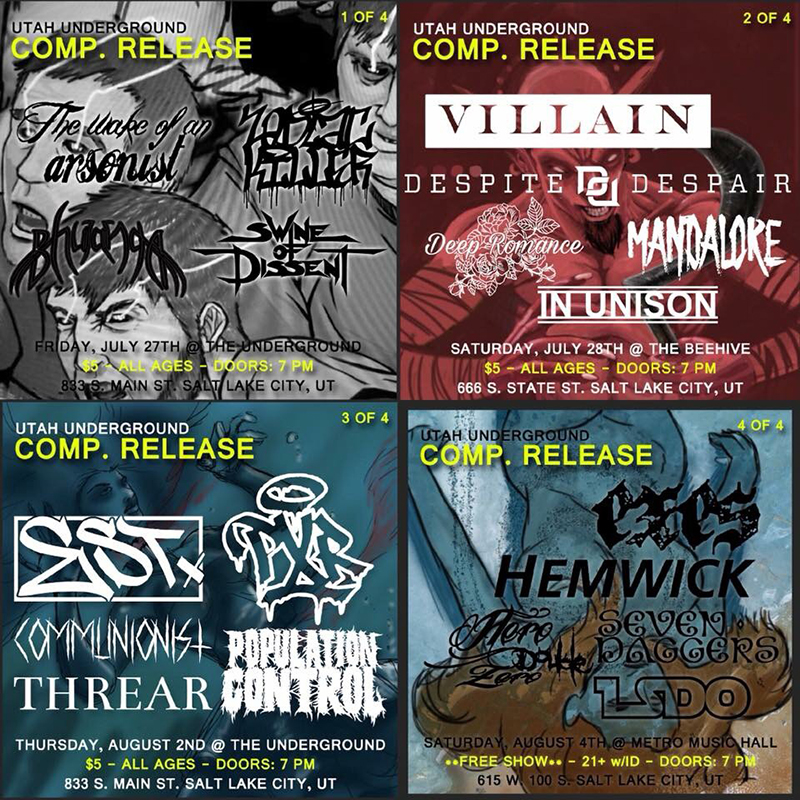 Sean Dugger and Trent Falcone are celebrating the coming-together of Utah hardcore, punk and metal bands with four showcases of bands on the Utah Underground Compilation.

“Let’s give a big shout-out to Sean Dugger! He put all this together!” I can’t tell you how many times I’ve heard this line being said in the last two Utah Underground Compilation release shows I’ve been to. I expect to hear it a million more times in the upcoming ones. Dugger deserves a substantial amount of credit for spearheading this project, including gathering the bands, booking the shows and basically coming up with the idea back in the winter of 2017. However, he hasn’t been going it alone—Trent Falcone of Villain has basically been a right-hand man to Dugger since the beginning. “When I heard he was trying to put this together, I reached out and said, ‘If there’s anything you need, I’d be more than happy to help out,’” he says. Dugger and Falcone met up and talked about which bands to include, cover ideas, how to promote it, and the shows. “We talked about trying to do one show in one day with everybody and it just evolved from there,” Falcone says.

The idea for the compilation blossomed as a result of a Facebook post that Dugger made about the 2003 Mean Streets SLC Hardcore compilation and asking if any of the modern local bands would be interested in doing something similar. “Basically, every band came to me off of that post,” says Dugger. Falcone says, “He already had a pretty good lineup of people that were interested, and everybody knows each other and everybody talks all the time and everyone who’s active wants to be involved.” All told, there were 23 bands that appeared on the final cut of the CD, despite having a few drop for one reason or another. “I think some bands had some issues with recording and a few couldn’t get in, but not many,” says Falcone. “This is close to the original list as far as I recall.”

The songs were all recorded, mixed and mastered by Andy Patterson in his studio The Boar’s Nest. While some songs were repeats from the bands’ previous albums, the majority were recorded specifically for the comp, some of which—such as “Time’s Up” by Establish, “Lucas” by Population Control and “Esprit de Corps” by In Unison—are debut releases. “That was the plan for The Wake of an Arsonist, to exclusively release “Grade” for the comp,” says Dugger, “and a lot of people started dropping their singles, and we said, ‘Fuck it—we’ll drop ours, too.’” Villain recorded a session for the compilation as well. Falcone says, “We did two songs, but it was an obvious choice for us because it’s a Utah hardcore compilation, and our song is called ‘Skerv,’ which of course is inspired by our buddy Scott ‘Skerv’ Arave (RIP), so it seemed like a no-brainer.” In today’s digital age, it’s really easy to just copy and paste bands’ tracks onto a playlist and hit play, so the swell of new songs help to enhance this comp’s exclusivity. Also featured is new group Unfinished Business, consisting of Patterson, Matt Mascarenas (Reviver, Westing, City Ghost) and Cache Tolman (Iceburn, CIV, Rival Schools).

Another aspect that one would notice about this comp is that every band featured has a unique sound. “It doesn’t sound like the same band 23 times,” said Falcone, “I don’t think there was anything on there I didn’t like.” It’s tricky to pull off a compilation like this and not only have bands that only sound different but also flow so seamlessly. “The order of the songs was random,” Dugger says. “I put the song titles on this app called Who’s Next and had it shuffle them.” The CD review of the compilation will go into more detail about its content and how different the songs and bands are from each other, so check that out!

The idea for the shows were more or less part of the plan for the release—really, any excuse to put on a show is a good one, and this was no exception. “It’s fun to play with everybody,” says Falcone. “My disappointment is that it would’ve been cool to play one or two shows with everybody on the same show, but it’s pretty impossible to pull off.” What started as a blueprint for a festival-type lineup was quickly fragmented into four separate bills on four different nights showcasing each band on this comp. “Once we decided we couldn’t pull off one thing, we talked about four different shows, then we can get everybody on it,” says Falcone. “We talked about weekends and trying to guess when it would be ready, and it kept getting later and later.” Dugger was rolling with the punches on getting the shows booked, lineups finalized and locking down venues. “We ended up booking three venues because there were seven bands on each show, and that was too many, so I locked down another venue—The Underground—to spread it out a little bit more,” says Dugger. “It’s one of my favorite venues because of the intimacy.”

The tumultuous support he received from the scene indicates not only the necessity of keeping it DIY but also that this project didn’t happen with one person—Matt Lloyd (PXR, Establish) and Kole Campbell (Deep Romance) helped with promoting the show and also making the fliers. Konrad Keele (Mandalore) and Derek Wetenkamp devoted their respective venues, the Beehive and Underground for the release shows. For the CD, along with Patterson providing what was needed to record it, Anthony Davis (Seven Daggers) helped out with finding new bands after some dropped, Matt Hardy (Basura) and Zak Prescott (Mandalore) helped to get the comp in a physical format. Samson Martinez created the cover art, Nicole Davis provided the photo for the back of the CD, and Dugger’s wife, Natalie Dugger did the “easy disc work” (downloading songs and artwork, and getting all the track titles, which is a comprehensive task itself). Dugger kept a pretty tight-knit group of friends in his corner to help him pull it off. And he thanks and loves every last one of you!

“It’s an incredibly supportive scene, and we certainly feel lucky that the younger bands, for the most part, respect their elders, and I know that people who come to see us that are older were just blown away by In Unison and Establish,” says Falcone. “We’ve seen a lot! We’ve been around a long time and for us to be excited and blown away is pretty cool. It’s always fun to play with other groups you’re not familiar with.” That’s what this whole project is—it’s a culmination of musicians and fans, both old and new, no matter the genre, coming together to support a common objective. It is a living, breathing beehive.

Be sure to catch the third show tonight at The Underground and the fourth show on Saturday, Aug. 4, each at 7 p.m.