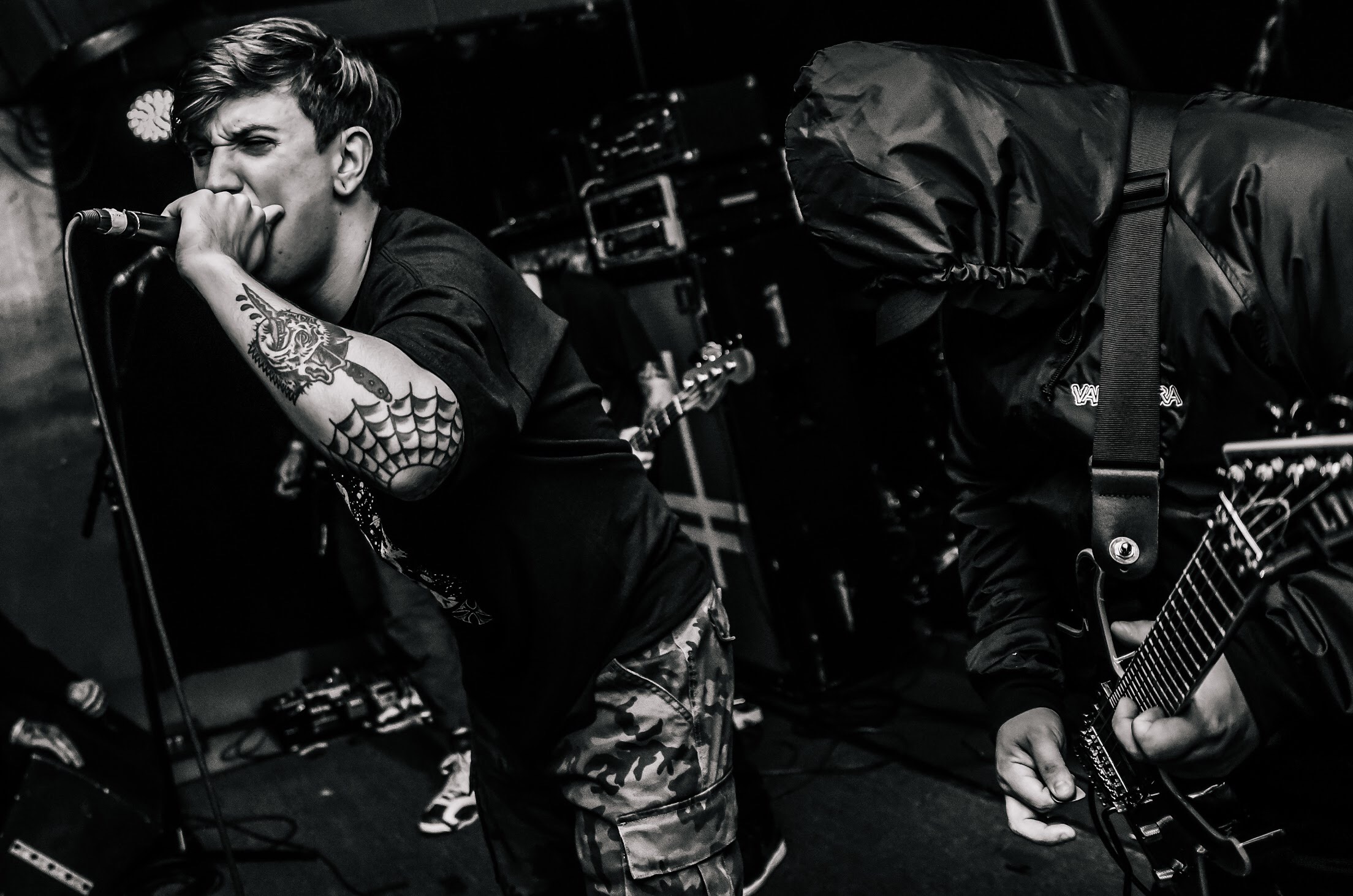 Victims of Life: An Interview with Vamachara

After performing at This is Hardcore 2018 and catching the attention of hardcore kids everywhere, the up-and-coming Vamachara are keeping themselves busy by hitting the road with Judiciary and Creeping Death. By combining metalcore, beatdown and hardcore, Vamachara are bringing that late-’90s–early-2000s revival heat that the scene can’t get enough of right now, and they’re pulling it off with style on their most recent release, Despondent, which debuted earlier this year.

In anticipation of their Salt Lake City date, Vamachara discuss their early-days, musical evolutions, and of course, tour life.

SLUG: Would you introduce yourselves and what role you play in the band?
Vamachara: Vamachara is Alex on vocals, Davey on guitar, Xavier on guitar, Nico on bass and Josh on drums.

SLUG: To start off, what does “Vamachara” mean and how does it represent you as a band?
Vamachara: Vamachara means “The Left-Hand Path,” basically just obtaining bliss through a darker path. We definitely go for a darker sound, so the name just fits with what we’re doing. It was actually suggested as our name but then tossed out when we first started. It wasn’t until we booked our first show and needed a name that we decided to go with Vamachara, after all.

SLUG: What goals did you have when you started Vamachara? How have those goals changed since your popularity has increased?
Vamachara: I think our goals are relatively the same—just touring a lot and writing music we enjoy playing. We didn’t think we would be actively touring when we started, but we just started working with James at State of Mind and left for a tour, along with a really crazy amount of touring next year.

SLUG: The surprising elements of Despondent are in the little details. Songs like “Reign of Hate” and “Total Armageddon” shine in that light—how do you combine elements of beatdown, hardcore and metalcore to make them your own? What do you think gives Vamachara your signature sound?
Vamachara: The sound of Despondent comes from a culmination of everything we love from some of our favorite albums. Everyone brings pieces and ideas to the table from their personal influences, and we try to put our own spin on it to create the strongest final piece we can. We typically draw heavy influence from bands like Arkangel, Disembodied, Caliban, Martyr A.D, Kickback and early-era Throwdown.

SLUG: “Reign of Hate” is your most popular song on Spotify, and with that piercing pinch-harmonic (and is that a whammy bar??) around 0:30 that leads straight into a violent breakdown, it’s easy to see why the scene has bitten onto it so hard. Did you anticipate this song’s success while in the writing process? If not, what song did you think would be in it’s spot originally? Why?
Vamachara: Yeah, that’s a whammy bar— it was Davey’s idea, originally. We definitely didn’t expect the song to take off as it did. It was up on our Bandcamp as a two-song promo along with “Watch You Burn” for about a year before eventually making it onto the record. It certainly didn’t get as much attention until it was re-recorded for the album. It’s now become a solid staple in our set. We originally thought songs like “Descension” and “Substance Submission” were stand-out tracks as we were writing the record—mostly due to the catchy middle parts and Alex’s push for stand-out vocal patterns.

SLUG: Tracks like “Descension” and “Substance Submission” are groovier than the others. What are you channelling when you create songs like these? What are you trying to draw from the crowd in a live setting?
Vamachara: The goal of every song is to have something that everyone can enjoy in one way or another. We never settle for a standard song structure or for something to sound “typical” or “generic.” We always love crowd participation in whatever form people choose to participate in. As long as people enjoy the set, we’re pretty happy with it.

I feel like when it comes to those songs, I definitely drew inspiration from the lyrics on the record No Surrender. That was always in my head as the “evil-sounding song,” and I wanted to write some dark material for it. Especially when the cleaner guitars come in, it definitely gave me the opportunity to use the whispers and weird talking parts.

SLUG: Since your first full-length LP was released this year, how would you say that Vamachara’s evolved since Demo 2014?
Vamachara: There’s been a lot that’s changed for the band, musically. Since the demo, we added a second guitarist (Xavier) and had a member change with Nico as our bassist. The sound has evolved, and we expect it to grow even more with future releases. We’ve really focused on different sounds and specific structuring for Despondent that we really didn’t try before with the demo and Lapse. Now that we’ve feel like we have developed our sound enough, we plan on pushing our limits even more.

SLUG: You recently played at This is Hardcore. Please describe that experience.
Vamachara: This is Hardcore was an amazing experience. Every time we’ve played Philadelphia, we’ve always had fun. We’re very fortunate to have a group of friends who come out and support every time. The TIHC team works really hard every year to make sure the fest runs as smoothly as possible. We’re thankful they gave us the chance to play this year.

SLUG: How has playing such a major festival affected your career?
Vamachara: Since playing TIHC in July and United Blood in April, we’ve definitely seen a positive reaction, between more plays on streaming services, to higher attendances at shows to increasing merch sales. We’re just happy to be able to play music we like and that other people enjoy, too.

SLUG: How have your live-show performances developed since This Is Hardcore? Is there anything specific you learned there that you’re implementing into your tour with Judiciary and Creeping Death?
Vamachara: Our live show is always changing. We make sure that every set is unique and that we always give it everything we can. We swap the order of our songs or add in new transitions to keep it from being boring or repetitive.

SLUG: Because you’re touring so much this year, what might we be able to expect to see from you musically within the coming months, or coming year?
Vamachara: We can’t really say too much more about the future that hasn’t already been released. Keep an eye out for things to be happening in the next few months. Definitely be there for the tour with Judiciary and Creeping Death.

SLUG: Whom have you played with on tour whom, you feel, has influenced your sound, no matter how big or small that inspiration may have been?
Vamachara: I would say everyone we’ve played with has an affect on us, somehow. Whether it’s a small part of a song that stands out, or their stage presence, or a piece of gear that gives off a tone that we like.

SLUG: What is the California scene like right now? What makes it special?
Vamachara: The California scene has really bloomed over the past few years. With such a variety of bands going for new sounds or reinventing classic styles, you never really know what will happen next. It’s great to see so many new bands come up and make a name for themselves all the time.

SLUG: What do you love most about hardcore, whether in your local scene or internationally, and how does it fuel you as a band?
Vamachara: No matter how important or unimportant you may feel in the scene, there is always some way you can help better your scene—whether it’s throwing shows, helping make flyers, taking photos or videos, starting a band, helping promote or just attending shows. Everyone has their own part and contributes to their scene in some way— and that makes everyone important.

Vamachara will be performing Tuesday, Sept. 18 with Judiciary, Creeping Death and local bands Repulse and Victim to None at Gold Blood Collective. Doors open at 7 p.m.