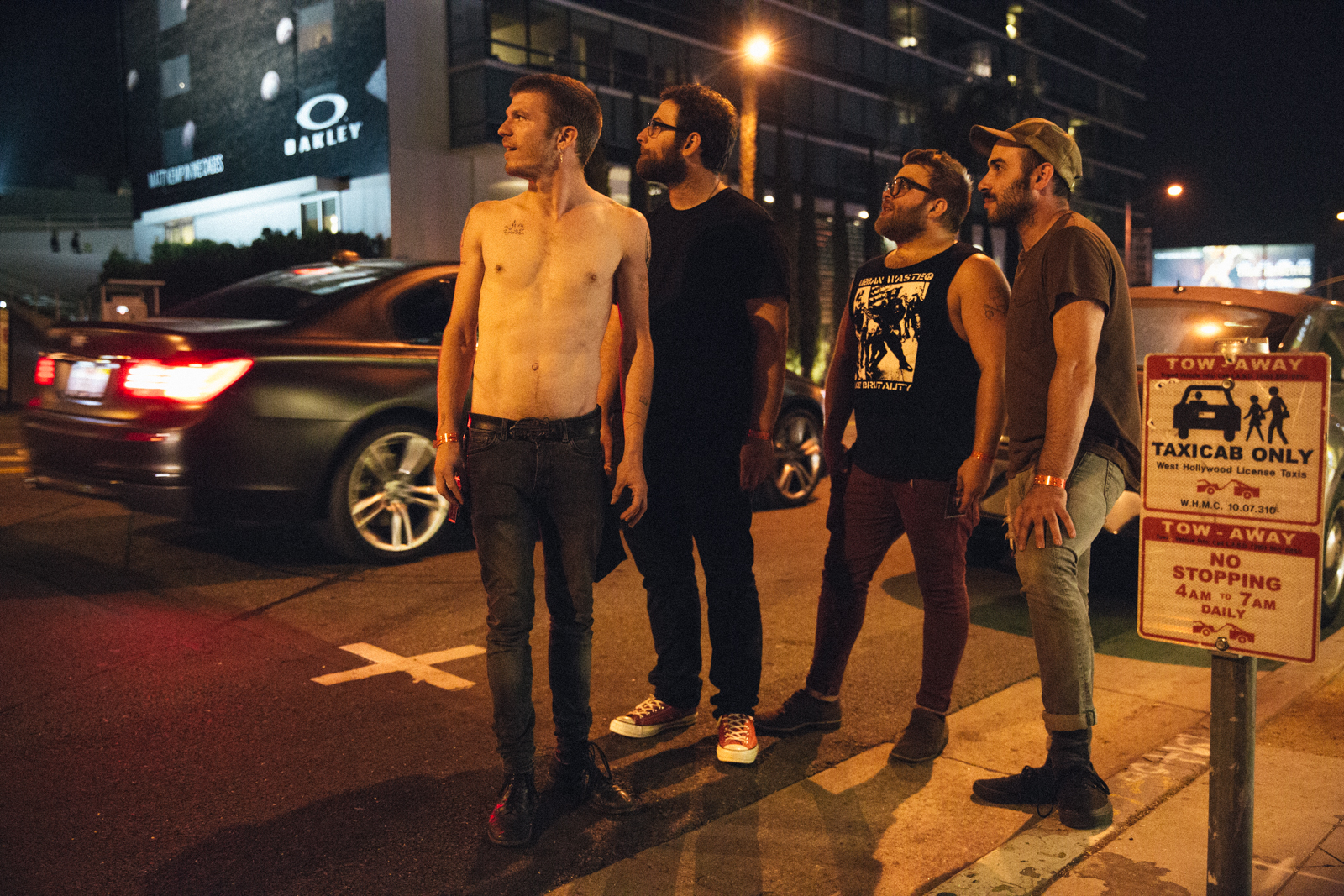 Victims To Be: PEARS’ Zac Quinn The band PEARS as seemingly became an “overnight sensation.” I hate using phrases like that, but they have been a band for a year and a half and already have been playing headlining shows across the nation as well as performing the main stage of the Punk Rock Bowling festival in Las Vegas and getting picked up by Fat Wreck Chords in the process. Sprawling out from the musically candescent city of New Orleans, PEARS has gained some major recognition with their unique blend of in-your-face hardcore and three-part harmonies tied in with vocalist Zac Quinn’s aggressive stage performance. SLUG had the privilege of picking the eccentric singer’s brain to get an idea on who PEARS are, what they’re up to, and what to expect down the road.

SLUG: I was introduced to you guys at the Punk Rock Bowling Festival in Las Vegas earlier this year, and one thing that really stood out to me was your onslaught of stage maneuvers—who or what influenced you to move as such?

PEARS: Well, when we started playing together everybody started saying things like that, and the only thing I kept thinking was “That was pretty easy. Why doesn’t everybody do that?” There weren’t necessarily musicians I was influenced by, it’s like when you see how a body aesthetically looks and moves onstage, you don’t necessarily think about rock n’ roll. Of course, when I was growing up I loved Iggy Pop, Johnny Rotten, the whole bunch, but I definitely love movie monsters. I want to do more, like I never thought of doing ballet until I started watching videos of me performing and thinking of how to improve upon it, and I think I’d look pretty damn good in a tutu.

SLUG: You barely released a new song, “Snowflake,” what else is waiting in the wings musically? Is there a new album on the horizon?

PEARS: Oh there is a new album, we just finished recording it. We recorded “Snowflake” along with 15 other songs that probably won’t all make it on the final cut. Go To Prison happened so fast and nobody was really thinking about it while it was happening. The process was more grueling this time around, and my personal life was in complete upheaval during all of it, so hopefully it wasn’t all for nothing.

SLUG: So would you say there was a more structured songwriting process going into it this time?

PEARS: Oh yeah, it was over the course of more than a year of writing and rewriting lyrics, or moving lyrics from one song to another, and rearranging this and that. I’ve never worked on anything this hard. Go To Prison was written in hours collectively so, yes, it was definitely different.

SLUG: How is the punk scene down in New Orleans?

PEARS: It’s a MESS down here man—it smells bad, it sounds even worse, it’s a whole lot of fun if you’ve got a few years to kill. It’s really hard to stay productive, I don’t even go out anymore and that’s how I’m able to get stuff done. Any given night there’s a million things going on just musically and not to mention that everybody here is spoiled rotten. Since we’ve been on the road, it’s really refreshing to go to different cities that are stoked to have live music happening. That doesn’t happen in New Orleans—there’s such an abundance of live music that it’s just oversaturated.

SLUG: You’ve guys got a very bizarre sound, but in a good way—one second you have these pounding, snarling, atonal guitar riffs and then it shifts on a dime to a more melody driven sound. I know the Descendents were a big influence on you guys, what else was a dominant influence on your sound?

PEARS: Well at any given time, we’re all listening to different things regularly, but this time around we tried to not ride out just one of our influences, like this little bit here doesn’t sound like it fits for this band, and we tried to write our way around that. When we were writing Go To Prison I was listening to Can I Say by Dag Nasty, and because Go To Prison was written so quickly I would venture to say that that was my largest influence for that record. However, musically and lyrically are different things too—this time around I was watching a lot of stop motion and writing some weird poetry and I thought to myself that maybe I could fit this in a hardcore song. It’s more Go To Prison than Go To Prison was—the pop is poppier and the mean is meaner.

SLUG: You guys have been a band for roughly a year and a half and then all of the sudden you’re getting signed to Fat Wreck Chords, you have one album under your belts, another one about to come out, and have been doing an excessive amount of touring on top of that. How do you feel about this huge transition?

PEARS: It’s really weird, we’re still a new band and for having done what we’ve done in the past year and a half feels crazy, especially with such little time under our belts—it definitely feels longer. I still feel like I’m supposed to be delivering sandwiches every morning and it’s really difficult to be out as much as we are. But we’ve unanimously decided to soldier through this—if you believe in something, why put half in when you can go all in?

SLUG: Exactly, and as long as you are putting your all into it there will be appreciation for it.

PEARS: Yeah, and I can feel it and that’s when I know that the hard work is paying off. It’s not that hard of work—if I were to call it a job, it’s a pretty cool job. I don’t know how long we intend to keep this intense touring schedule that we’ve had, probably for a while but not forever. Doing it is hard, but having done it feels good.

SLUG: With all that having been said there’s a lot of word going around that PEARS is the most promising band to have formed in the past decade or so. How do you guys feel about your future? Would you say it’s looking about as positive as everyone is making it out to be?

PEARS: Well, no pressure there right? [laughs] I don’t know, man, that stuff is pretty wild to read. If I think about that too much, it’d drive me insane. I just have to keep doing this stuff that I love, grueling as it may be. I’m really proud of what we’ve done and I’m proud of this record that’s going to come out and hopefully people like it.

SLUG: Out of all the songs that you’ve been playing live, which one(s) is your most favorite?

PEARS: Well out of a repertoire that is 10 songs, I’d have to say I love “Grimespree.” I love how sinister that song gets and I love performing that one. Out of all of our material right now that one has to be the most left-field section of Go To Prison. And we’ve been playing a newer song that will be coming out on a 7” very soon. I think all of our new material is great—I can’t wait to perform it, we are going to sit on it for a little while which is going to drive me nuts, but we will be playing some new tunes on these upcoming tours and keep dropping more as it gets later in the year.

PEARS will be playing Kilby Court on Aug. 26 with locals Problem Daughter, American Mouth, and Speak Uneasy. Mark my words, you do not want to miss these guys—they are one of the gnarliest, grittiest, craziest bands you’ll ever see live, so let’s make their first-ever show in SLC one to remember.