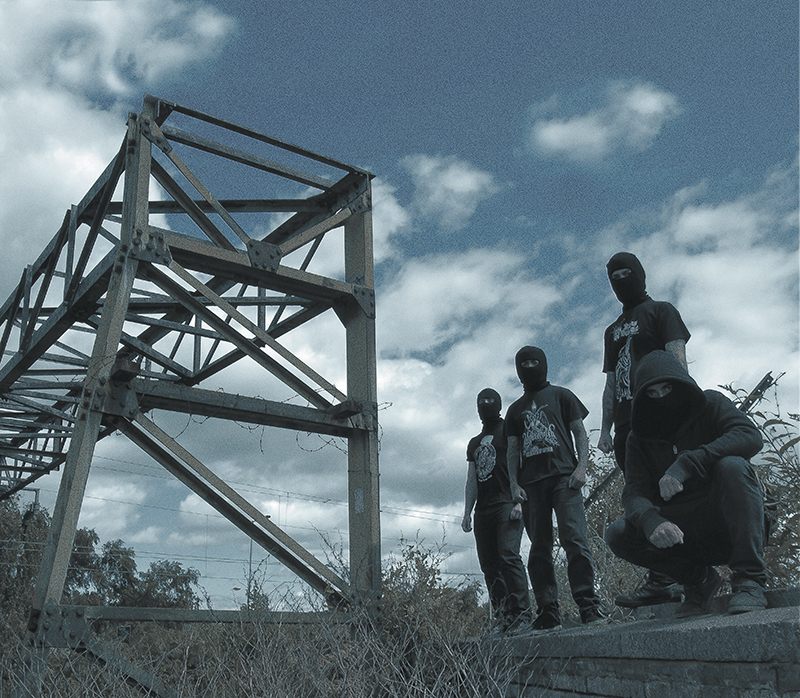 There is definitely some beauty to be found in the unknown. We enjoy a separation between our music and varying professions, allowing us to explore what is essentially an exorcism of our daily frustrations.

Fans of Dragged Into Sunlight won’t see much sunlight when the U.K.-based, five-piece band plays at the Metro Bar in Salt Lake City on July 10, well after the sun has gone down over the valley. Dragged Into Sunlight—who play their shows with their backs to the crowds pummeling some ugly, grimy and noisy death/black/doom extreme music—have become widely known with just two full-length albums. While the band just released a collaboration with extreme noise artists Gnaw Their Lounges, titled NV, it’s all about DIS’s artistry, which emphasizes intense live shows.

SLUG: How did this collective of five artists come to create Dragged into Sunlight, and what made you decide on the music you wanted to create?

DIS: There are upwards of 10 individuals involved in Dragged Into Sunlight nowadays.  The music that Dragged Into Sunlight has strived to create was a necessity—something with a blatant disregard for the boundaries presented by scenes and politics, something which doesn’t care, has no empathy and acts on its own selfish agenda.

SLUG: Also what made you decide to keep your identities hidden?

DIS: Well, in a world where everything is a known entity, mainly because of the Internet, some things are best kept hidden.

There is definitely some beauty to be found in the unknown. We enjoy a separation between our music and varying professions, allowing us to explore what is essentially an exorcism of our daily frustrations.

SLUG: If I’m correct, you only cover your faces for band photos. I skimmed through live videos, and you have your back to the crowd or the set is just extremely dark, no face coverings—? I remember ages ago when ISIS released their first full-length, Celestial, and I saw them in roughly 2000. For the most part, they did not face the crowd, and I never saw the band do that before, which was pretty mind-blowing. That said, what is your main goal to deliver to the audience when you play live, and in the manner that you do?

DIS: Correct. Dragged Into Sunlight is an ugliness best kept in the dark. We certainly grew a little tired of seeing the same audience interaction from bands.  It became tedious to watch.

People go to shows to see live music. You don’t go to a show to see an old man talking about metal, giving the same tired and disingenuous speech delivered night after night.

If you want posing for cameras and disingenuous speeches, it is your ticket money being wasted, not ours. We are all fans of extreme music, and we know that audiences want what we want, to play as hard, fast, heavy and loud as possible—that’s what this is about.

We hope to provide the opportunity to the audience to reach their own conclusion. Dragged Into Sunlight delivers a unique experience, and either you enjoy it as much as we do, with 200 percent going into every note or you don’t. That’s your prerogative. No one here is losing sleep if you don’t like what we do. It is what it is, and Dragged Into Sunlight continues regardless.

SLUG: Your live experience looks sort of ritualistic and—in a way with the extreme lighting—maybe meant to be a bit psychedelic or disorienting to audience. Why add this to your live show and what can fans expect from your live show in SLC?

DIS: Dragged Into Sunlight is an extreme sound and approach, so the message is very much that if you opt to attend a show, it is an intense experience, and you can expect extreme lighting.

Fans can expect us to give it everything from the first note to the last. We want you to feel what we feel. It needs to be a genuine and mutual experience, otherwise there is little point point in us both being in same room, be there one person or 1,000—you may as well listen to a CD otherwise.