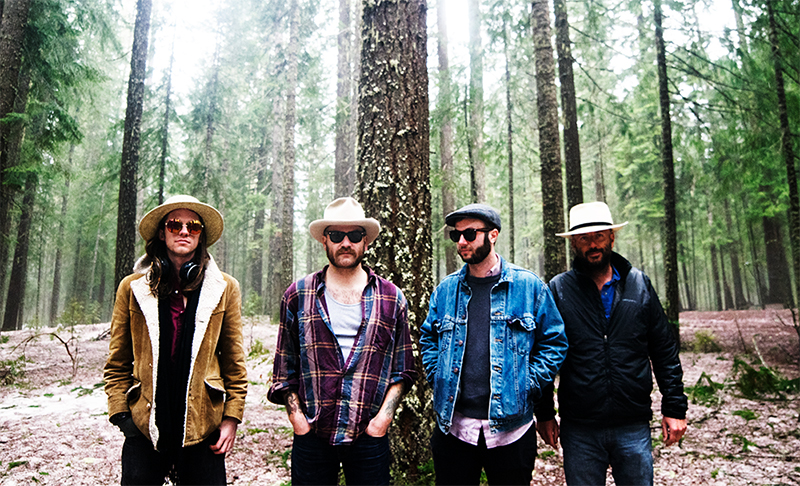 Want to support your scene and your cause? The Crook & the Bluff present This...

Where will you be on Jan. 20, 2018, the one-year anniversary of Inauguration Day 2017? Hopefully, at the Urban Lounge at 8 p.m. with local psychedelic rock band Crook & The Bluff, who are rallying to host a protest concert titled This Machine Kills Fascists—an ode to the late, great Woody Guthrie. For just $10, the all-proceeds-donated night is designed to educate and inspire with music, petition signing and information on voter registration and community involvement to combat the looming social-injustice issues of our time. Crook & The Bluff will share the stage with other local musicians and will be hosted in partnership with local charitable organizations such as the Sierra Club-Utah Chapter and The League Of Women Voters Utah. Frontman Kirk Dath unpacks the idea.

SLUG: How and why did you come up with this idea​?​ What’s idea and format behind this show?

Dath: The idea came about after the white nationalist rally in August. That day at our rehearsal, the band was talking about how we couldn’t believe that this fascist mentality still runs so deeply in our country. The idea snowballed, and upon thinking on how or what we could do to get more people out of their comfort zone and be more politically involved, we settled on the idea of having a protest show. We’re not by any means a strictly political band, however, we do have strong opinions about how [people in our] country should treat one another. We thought, “Well, let’s do what we do and play some rock n’ roll and hopefully inspire some people and remind them what civic duty is all about.” By doing so, hopefully we can raise some money to help some local charitable organizations do what they do best, which is to organize and fight the good fight. It’s important that we all involve ourselves politically, even if it’s a little every day, week, month or year. Together, we can chip away at this system and sculpt a society that we’re all proud to be a part.

​We’re going to ​throw a rock n’ roll show in protest to social injustice by performing both original and cover songs of inequality, war and revolution. We partnered with Alex Cragun, the Executive Director of the Utah Democratic Party, and he’ll be acting as M.C. As this is a non-political, non-partisan event in nature. Alex will be participating in the show as public servant, providing information on voter registration, community involvement, charitable work, etc. He’ll address the audience in between the bands’ sets. During performances, Alex will be occupying a booth where audience members can sign petitions, mailing lists, register to vote and obtain information on how and where they can involve themselves locally. TMKF will be donating all proceeds from the show to four charitable organization partners, Sierra Club-Utah Chapter, Alliance For A Better Utah, Wounded Warrior Project – Utah Chapter and The League Of Women Voters Utah. Representatives from each organization will be present to share more detailed information, and audience members will will have the opportunity to engage in their emboldened civic duty by donating their entrance fee (a raffle -ticket) to the charity of their choice.

SLUG: This Machine Kills Fascists is a reference to Woody​ Guthrie. Why this reference?

Dath: ​This is a reference to the infamous slogan emblazoned on Woody Guthrie’s guitar​. Guthrie, being a significant figure in American folk music, wrote songs of social justice and inspired so many after him to stick up for what’s right, to organize and unionize. ​”This Machine,” referring to his guitar or music in general ,is the medium in which we (as a band) use as a tool to shine a light on these issues that plague our country. The name of the show was just a flashing neon sign in our minds that seemed to fully encompass the kind of event we wanted to present.

SLUG: How will this be different than a traditional live show you play around town?

Dath: The whole idea ​is​ to get more ​young people involved in our local government​. However daunting that may seem to some of us, it’s really not that hard. We thought hell, let’s bring some people from our local government to the space where we all feel most comfortable and shatter this feeling of disconnect​. TMKF is a concert inspired by previous generations’ champions of social justice, with the purpose of gathering people together for a night of entertainment, education and engagement. TMKF will use the platform of a rock n’ roll concert to raise awareness of social issues, provide a space for collaboration and discourse, and to encourage people to get involved in their community. Neither political nor partisan, the show will explore a number of themes and emotions that are related or in direct opposition to intolerance, hatred, violence and inequality, all through the powerful medium of musical performance.

SLUG: Will you be sharing the stage with or hosting any special guests during the event? If so, whom, and why are you partnering with them?

​Dath: Absolutely. We’ve got musical guests, Green River Blues and The Arvos, both are incredible SLC based band​s that know a thing or two about rock n’ roll. Also, … Cragun will be supplying audience members with the opportunity to register to vote, sign petitions and collect raffle-ticket donations. Also, we’ll have a couple representatives from each organization that we’ve partnered with [mentioned above.] Everyone here is from or based out of SLC, everyone here cares about our city and our country, everyone here wants change—and that is why we’ve partnered with them.​

SLUG: TMKF is on Jan. 20, 2018. What is the significance of having the show on the anniversary of the 2017 inauguration?

Dath: ​After everything that happened in 2017, it seemed fitting that if we were going to hold a show in protest of the ​particular ​issues we’re focusing on, that it be on this date. This is not an anti-Trump show; it’s a show meant to encourage people that if they don’t like how the system works, then they themselves have to do something about it.​

SLUG: As a local psychedelic band, what do you believe are the benefits of using music and live shows to tackle issues about intolerance, hatred, violence, and inequality?

Dath: ​I don’t think I need to tell anyone how powerful of a medium music is. We simply eat, sleep and breathe it. This is the best way we could come up with for being involved on a larger than just personal level and doing our part to help the community that we’re a part of and love so much.

SLUG: Do attendees need to identify with any particular group or view to engage with and enjoy the show?

Dath: ​​Absolutely not. This is a nonpartisan event. The name of the event may sound fierce, and that is absolutely what we intended, but the event comes purely from a place of love. If you’ve ever scoffed while reading the news, if you’ve ever asked the bartender to change the channel because this shit is depressing you, if you’ve ever spit-screamed in your car while listening to NPR, it’s important to come to this show. Don’t just sit around; you don’t have the kind of time for that.

SLUG: What are your overall goals for the evening? Aside from purely entertainment, what do you want attendees to leave with—a new perspective or understating? Inspiration to take action for a cause?

Dath: We want you to leave with a burning heart. And we want that fire to stick with you when you look out your window over YOUR city and YOUR country. We are breaking the mentality of “Well, I’m just not a political person” or “I don’t have the time to get involved how I’d like.” Nobody is asking you to throw on a cape, but if enough of us try just a tiny bit more, I think we’d all be surprised with how much we can achieve. Don’t make me whip out the Gandhi quote! I will say, however, that we have to create the space we want to live in—ain’t nobody going to do it for you. It’s our civic duty,​ man.​

This Machine Kills Fascists is a great event for all individuals looking to hop off the couch of despair and dip their toes in the activism pool. What better way to get involved than on the symbolic anniversary of inauguration day, at one of our community-favorite local venues, with local bands, local organizations and local folks looking to make positive change in our community, locally and nationally? Don’t miss out—be there: Jan. 20, Urban Lounge, 8 p.m. –Lizz Corrigan