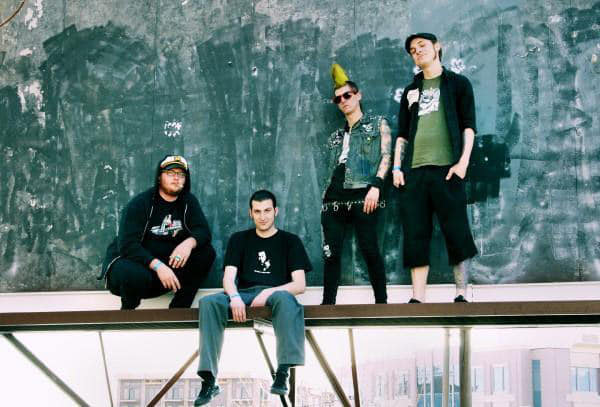 We are not a Band Anymore! – Dubbed Withdraws

You heard that right! Straight from the horse’s (or rather the Skunk’s) mouth. Despite having officially punched out as a band in 2010, rumors have been spread since their semi-reunion/birthday show for Konrad Keele (Beehive Social Club, Mandalore) and the creation of an official Facebook and Bandcamp page, that the crack-rock steady/skacore hybrid musical vessel known as Dubbed may be coming back. We’re here to put the rumors to rest, that while Dubbed is not planning a comeback, they are not leaving without a trace. “When Dubbed broke up, we had a full album—the best version of the band—ready to go.” Says guitarist/vocalist Skunk. “We were tired of being around each other in crazy situations, and it kind of imploded at its peak. So, we left with this pain that we left something on the table.”

That’s been the overall ethos of Dubbed. They were a tire fire that burned too hard for too many years that they eventually burned out. “We’re grinders—that’s what we do,” says bassist Mike The Bass. “We’d watch all these bands peel off, and we just kept burning.” The majority of Dubbed’s illustrious career was spent burning the candle at both ends while simultaneously—either out of pride or drunken senselessness—torpedoing any opportunity that they may have had to progress themselves forward. Whether it was racking up a $120 bar tab in Orange County and getting too drunk to play a show in front of record label scouts or refusing to relocate to a more culturally favorable city out of wanting to preach the punk Gospel of SLC, all the cool stuff that happens to bands that go somewhere happened to Dubbed except they never went anywhere!

After forming in 2000, Dubbed’s penchant for multiple styles was groundbreaking yet esoteric. “Our whole idea was that when we made an album, we wanted it to sound like a compilation or a mixtape,” says The Bass. “If we made a dub, we wanted to make it sound legit. If we played a punk rock song we wanted it to be punk as fuck. We didn’t want to be ska-punk.” When ska often found its way in the mix, it was usually along the lines of Operation Ivy and Rancid with a hint of Choking Victim. “Back in the day, we opened for Pepper, and I’m sitting in the alleyway and I think it was the moment where it hit me—‘I can’t relate to any of this shit! I don’t give a fuck about any of these people in here!’” says The Bass. “After that, [Skunk] and I really wanted to create an original sound.”

Too mean and dirty for the ska kids and too jovial and happy-go-lucky for the punks, Dubbed were misfits among the outcasts, catering to the few that understood their sound. Every year, they’d play Skalloween, even though they’d always advertise themselves as “not a ska band.” Skint gave them a shoutout while opening up for the 2009 Germs show at Burt’s Tiki Lounge, dubbing them (har-har) the best punk band in SLC. “They were our sister band,” says Skunk. “They were chugging along and doing well, and meanwhile, they have this other band that’s like, ‘Hey, we’re cool too!’ but they loved us.” In a type of slow burn, Dubbed earned the acceptance among the punks after being able to pick up their distinct attitude in their sound and in their lifestyle.

The flier of a 2008 Leftöver Crack show proved their love of ruffling feathers, as it featured Godfather-esque artwork with the head of the (then recently deceased) LDS President, Gordon B. Hinckley pasted on the body of Don Vito Corleone. They received pushback from the promoter due to a fear of protests from the Mormon community for disregarding reverence for the prophet, but Dubbed simply argued that if the flier garnered them such disdain that it would boost them into the public eye and endow them with respect—and it did. “Me and Mike went into [Raunch] to drop off Stark Raving Mad records one day,” says Skunk, “And on this rack are these shirts that had our flier [on them]. It wasn’t even like they stole the graphic—they put the whole fucking flier on there!”

However, even through gaining traction as the lynchpin between scenes, the members of Dubbed never let egos destroy the integrity in their band. “We always tried to have fun with it,” Says Ecks (saxophone). “I was always happy that if we could make half a C note and get a condescending pat on the ass and a couple of free beers from Burt’s.” Punk bands are usually not ones to rest on their laurels, but Dubbed were incredibly self-deprecating when it came to their sense of worth. “Complacency creates mediocrity,” says The Bass. “That’s one thing no one could ever accuse us of was not giving a shit.”

Dubbed is putting all of their material on their newfound Bandcamp page, along with releasing one final record—the live recording of the last show they ever played—the appropriately titled Dubbed Withdraws. “Konrad Keele had been wanting us to play a show forever and we’re like, ‘No we’re not a band anymore,’” says Skunk. “For some reason, two years ago, he talked us into it. He caught us all at the right time and Ecks is like, ‘I’m gonna record it all.’ So we did.”

The reformed Dubbed included Scary Uncle Steve’s accordionist, Nate Wilson, and drummer Dave Motiee, who learned and mastered their catalog in days while Skunk and The Bass had to relearn and rewrite sections of their own songs. “On one hand, I was almost angered that I had to relearn some tunes because I had mastered them,” says The Bass. “In a lot of ways, I’m a better bass player, but I’m a different bass player, and I can’t play the things I was doing there.” Meanwhile, Skunk was dealing with the exertion of mentally backtracking from a semi-stable 30-something with a wife and a kid to his angry, drunk, angst-ridden, 20-year-old self in order to compose fresh lyrics, since the original ones hadn’t been documented and consequently forgotten.

Other than a split EP with Skint, an all-acoustic EP of covers and original material, and even a cut of one song in the studio with Andy Patterson that ended up on a compilation with the F-Bombers, Dubbed were never able to create a full-length record before their breakup in 2010. “That’s basically the gist of this record—we never got to put out the record we were striving so hard to get and it imploded,” says Skunk. “What this album is, is us throwing a little bit of gasoline as a really quick burst onto the tire fire and then fizzes right back out.”  Ecks put in serious hours educating himself on recording, mixing and setting up everything that was needed to capture Dubbed’s performance. “We played well that night, and I’ve been putting a lot of time into the mix,” says Ecks. “It’s absurdly crass and disgustingly blown out in the best ways that you’d want punk rock to sound.”

Because of their disregard to follow the straight and narrow path, Dubbed has been allowed to express themselves in ways that flaunted all of their unique perspectives musically. “You don’t hear punk rock bands with the exception of maybe three to five in the past ten years that incorporate boogie-woogie into their shit,” says Ecks. “You don’t hear punk rock bands that are throwing down Chuck Berry riffage, unless they’re blatantly dick-riding Tom Waits verbatim, and incorporating subtle aspects through spooky crack-rock steady ska songs with the pirate overtone.”

It may have taken them years to get the album of their dreams released, but it’s the best way for Dubbed to bow out on a triumphant note. Withdraws dropped on Feb. 14, and is available to jam on their Bandcamp, dubbed.bandcamp.com. The band is pressing 100 physical copies, available for free if you contact Dubbed through Facebook.